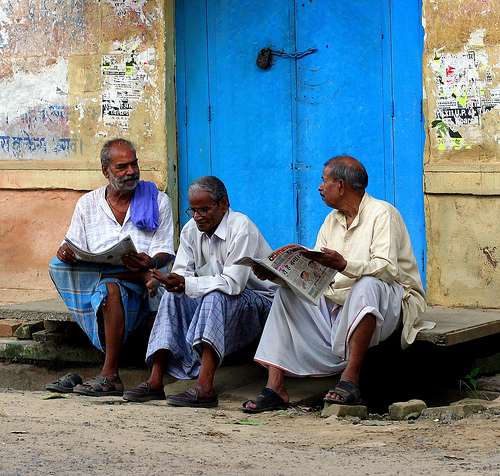 A complex Catch 22 situation exists in communicating the work of aid agencies and NGOs. Organisations face the question of whether they should clearly acknowledge the challenges in delivering aid and programs in developing countries, or solely present a positive, optimistic view of the transformative powers of development.

It’s a difficult line to toe. While positive images of children attending school, eating healthy food and bathing in clean water can mobilise support for government programs and increase donations for NGOs, glossing over the challenges that must be surmounted to deliver these results leaves agencies more open for criticism when public expectations are not met.  In some way, the upbeat messages communicated by aid agencies and development NGOs to get support actively contribute to criticism about service delivery and the length of time required to rebuild communities after humanitarian disasters.

World Vision’s Associate Director of Communications Dominic Nutt addressed this paradox in a recent debate, following a survey by the British Red Cross that revealed Britons (some 64 percent of those surveyed) wanted better information about how humanitarian aid was actually spent. Nutt acknowledged the way agencies “self-censor”, in part to avoid greater challenges in working with recipient country governments and in part not to clash with their own communications messages.

Campaigns by NGOs in particular often focus on how easy it is for individual donors to participate in the change process, emphasising small donations that can make a big difference. Internet communications have been harnessed by organisations such as Kiva, where individuals can provide a microcredit loan to a specific person or group. These approaches make a lot of sense from fundraising and mobilisation perspectives – people want to feel like they are doing good when they donate. By shifting the proximity of this do-gooding to a person-to-person relationship, it makes donation appear direct and transparent.

Anyone working in development policy or practice knows that the whole process is a lot more complicated – but telling people that development is hard might deter them from donating. Thus, acknowledgement of development challenges typically comes from references to the scale of problems, like statistics of the number of hungry or the number of children out of school. This approach once again mobilises support without making mention of the inherent challenges in addressing these issues.

With more transparency initiatives popping up and a vast array of online resources, it is possible for pretty much anyone to gain a deeper insight into the difficulty of development. However, most citizens, whether they are taxpayers or individual donors, will continue to take their information from mainstream media coverage and advertising. This means that the institutional constraints in the media also play a significant part in this communications complexity.

In a report commissioned by AusAID in 2002, Wendy Bacon and Chris Nash from the Australian Centre for Independent Journalism comprehensively analysed the coverage of development and humanitarian affairs in the Australian media. While the media has undergone a dramatic transformation since the publication of the report, largely thanks to the expansion of online news and 24/7 news channels, many points identified in the analysis are still pertinent and some have been further exacerbated by industry belt-tightening.

As a result, we are seeing limited scrutiny of development practice and effectiveness in the mainstream media.  For example, last week’s effort by the Courier Mail took the magnifying glass to AusAID’s expenditure to compare the aid agency’s financing of self-defence classes for aid workers in dangerous locations to the children’s film Kung Fu Panda.  The framing of the story is so ridiculous that even the majority of News.com.au commenters have scorned it.  Stories like this do not inform, improve scrutiny of aid effectiveness, or generate support for development assistance.

This kind of coverage does little to encourage agencies and NGOs to “confess” the challenges of aid delivery in their public communications. Agencies perhaps rightly fear that any such acknowledgement could leave them exposed to negative stories like the one above that fail to convey the complexity of development work and hence erode their support.  While media scrutiny of the aid and development sector is important for transparency and accountability (Nutt welcomed this scrutiny in his speech), there seems to be a wariness of what the media could do with such information.

Perhaps the bigger fear should be what the media is doing without this information.  Kung Fu Panda is a good example of this — if there was more easily accessible information available about the challenges AusAID’s workers face in the field, this story may have been fairer.

Ashlee Betteridge is a Researcher with the Development Policy Centre. A former journalist, she has worked in newsrooms in Australia and Indonesia.