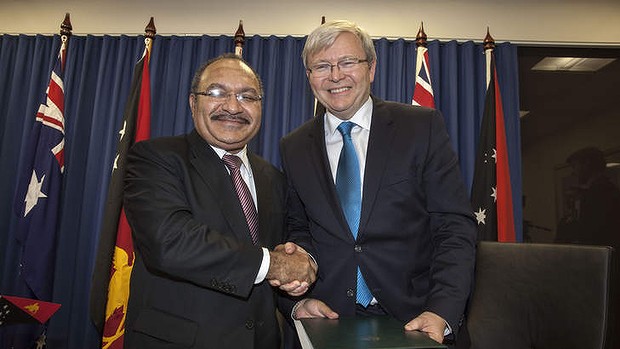 The joint Kevin Rudd–Peter O’Neill announcement that all asylum seekers will be processed and resettled in Papua New Guinea (PNG) triggered shockwaves through the Australian and PNG public. It is over a decade since the “Pacific solution” suite of policies was introduced and one thing is clear to the rest of the world – it twists and turns with the Australian election cycle. On the eve of another Australian election, Rudd’s announcement is viewed as a smart tactical move as he appears, at least for now, to have snookered his adversary Abbott with the ultimate maneuver after a series of failed “stop the boats” policies.

Much of Australia’s engagement with PNG on the Manus asylum seeker detention centre has revolved around responding to the political demands of the Australian voter and an assumption that PNG’s negotiating position will pivot around the Australian aid program. PNG on the other hand has dutifully gone along with Australia’s need to sort out its problem – a good neighbour, gracious recipient of aid and a regional team player. What more could you want in this bilateral relationship?

However, asylum seeker behaviour is independent of election cycles and the bilateral relationship between PNG and Australia cannot be a tradeable commodity. Might Australia be unwittingly undermining its medium- and longer-term position as a respected leader in the region for very short-term outcomes?

Of all the myriad of analyses and debates taking place about the Australia-PNG deal on asylum seekers, one that begs exploration from a regional political perspective is the PNG position on this regional issue. What might be PNG’s strategic objectives from the deal, aside from aid? How might this latest deal on Australia’s asylum seekers alter the relationship between Australia and PNG and, more broadly, the political dynamics in the region?

This article explores these questions. It emphasises that, as Ashlee Betteridge points out, the asylum seeker issue shouldn’t stop frank Australia-PNG discussions. Nor should O’Neill’s clear show of leadership and power detract from some of the harder questions he should be answering from his primary constituents – the people of Papua New Guinea.

In his first year as Prime Minister O’Neill has enjoyed absolute majority support from his fellow members of parliament with 101 members out of 111 in his government. He has also enjoyed  – mainly through a lack of scrutiny and criticism – support from his colleagues in the international arena. He has introduced constitutional reforms that will further cement his power, as is explained in this recent blog by Andrew Anton Mako.

This domestic political strength along with some events that have unfolded since O’Neill took government suggest that this is a Prime Minister who wants to be more than the naïve recipient of aid and the “smol boi” (small boy) in the negotiation. Without explicitly stating it, in the past 12 months O’Neill has shifted the state of political play in the region. 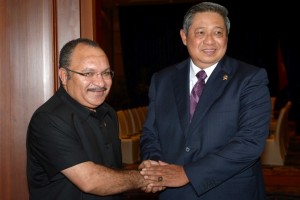 O’Neill is negotiating a multibillion dollar loan with the Chinese government for infrastructure development in PNG. He has also made offers of aid to Fiji and Solomon Islands.

O’Neill recently led a delegation of 130 of PNG’s finest talent, in both the public and private sector to Indonesia. As reported in PNG’s media, the outcome was 11 memoranda of understanding on education, air transport, business, workers exchange, petroleum and energy, border management and other areas. The media also reported that later this year or in 2014 Indonesia will reciprocate the visit with a delegation to PNG. In the meantime, O’Neill was notably absent from the Melanesian Spearhead Group (MSG) 2013 meeting. It might not have been a coincidence that Yudhoyono’s invitation coincided with the MSG meetings especially when the MSG leadership were contemplating the formal inclusion of West Papua as a member state of the MSG.

Regardless of how one might view PNG’s capacity to engage as a major player in the region, the above events signal to the region, and particularly to Australia, that O’Neill intends to be a player. To underscore this, in response to Abbot’s assertions that Rudd was granting PNG free reign over Australian aid, O’Neill made it very clear that PNG is trying to help with “Australia’s problems” and did not want to be dragged into Australian politics. On the Indonesian side, cracks are appearing on Rudd’s “regional solution” as Indonesian leaders express disappointment about the lack of consultation with them, and note that the PNG solution has implications for Indonesia. This indicates, as suggested above, that Indonesia views PNG as a valued bilateral partner in the region.

At the same time, since taking office in 2012, O’Neill has been resolute about supporting an “Australian designed and managed” regional solution to the regional problem. Whether this support is towing the Australian line of “friendship” or connected to a concerted strategy to become a player in the region is unclear. Nonetheless, there are advantages to O’Neill of his regional engagement strategy of “towing the Australian line”. For a start it enables him to undermine Australia’s traditional role as guardian of democracy and human rights in the region. How can one hold another accountable when one’s actions display an explicit disregard for the principles of democracy and human rights?

While O’Neill’s efforts at the regional level might be commended as a sign of maturity in international engagement, on the home front, he faces staggering development challenges and yet has distinctly displayed a tendency towards policies that undermine a rights-based approach to development. For example, the O’Neill government’s response to a national call for action against violence in the country led to the introduction of draconian laws on capital punishment. This law was introduced with virtually no consultation and furthermore no increase in associated funding to community programs aimed at lessening violence, and enhancing policing and community services. This is a regime which on the surface appears not to have any control of the police force, defence force or other security mechanisms in the country such as the huge private security sector. Stephen Howes discusses some of the implications of this for the asylum seeker deal here. One could speculate that it might be in the interests of powerful people to have a dysfunctional police and defence force – it makes for easier manipulation.

On Monday 15th July 2013, PNG media reported that a debate is underway in the PNG parliament to ban non-Christian faiths. On Friday 19th July 2013, PNG’s national television reported, with video footage of the parliamentary statement, that the Minister for Lands plans to remove squatter settlements in the urban areas to free up land for development. The numbers of Papua New Guineans residing in settlements are large and increasing. Although this plan is likely to be met with some resistance from members of parliament in urban areas, this kind of threat in PNG is not taken lightly as this government along with others before it, has not hesitated to proceed with the literal bulldozing and burning of settlement communities.

Ironically, Australian leaders’ insistence on treating PNG as the pawn in their political game has shifted Australia into a position of dependence on PNG. Furthermore it has enhanced PNG’s ability to manoeuvre in the Pacific and Asia region while undermining Australia’s ability to take PNG leaders to task on matters of significant importance for Australia in the PNG development arena.

The added twist in this irony is that O’Neill’s ability to deflect any criticism within PNG (apart from enjoying a position of power presently) is stronger because, unlike Rudd or any other Australian leader, he does not face the same level of media or civil society scrutiny. Evidence of this is the very little consultation he undertook with his cabinet and the wider public in PNG leading up to signing the asylum seeker deal with Rudd. In addition, immediately following this announcement, which has profound foreign and domestic ramifications for PNG, he has adjourned parliament till September, further eroding any chance that the PNG people might have to debate his decision. Another indicator of O’Neill’s shelter from public scrutiny is the fact that the major newspapers (National and Post Courier) in PNG have been relatively subdued in their coverage of this issue in the week following the announcement. The other trump card that O’Neill has on any Australian leader is the fact that the levels of poverty in PNG are such that there is a “nothing to lose” attitude.

As long as Australia pursues a “whatever it takes” approach to asylum seekers, it will continue to erode its valued role in the region as a guardian of democracy, accountability and human rights. Furthermore, it runs the risk of becoming increasingly marginalised from its immediate neighbours who may opt to engage with each other on a more level playing field without the hypocrisy of an Australia that assumes its domestic political priorities are more important than regional collaboration and that its leaders can buy domestic political power through aid alone.

Rudd may have snookered Abbott, but at what expense to Australia, and ultimately PNG?