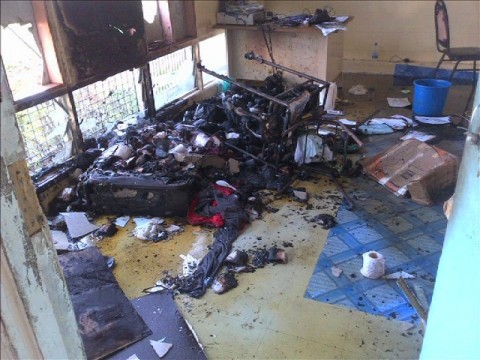 Damage at the University of Papua New Guinea Medical Faculty following the attack by military personnel.

On Sunday 14 July, the day Prime Minister Rudd arrived in PNG, two truckloads of rampaging soldiers attacked medical students at the University of PNG medical school, firing weapons, holding knives to their throats and causing injury and widespread damage to property (photos here). The attack was apparently some sort of pay-back following a minor incident the day before.

The attack drew little publicity in Australia, even though apparently Rudd had originally been scheduled to visit the same medical school, which receives considerable Australian support. In PNG, however, it was the topic of the week. Classes were suspended at UPNG, and students marched to Parliament House in protest. The medical school remains closed, a crime scene. The Port Moresby General Hospital doctors went out on strike in sympathy with the students. Many in Parliament and in the media questioned how things had come to this. Some traced the problem back to the military cut-backs of the early 2000s, when soldiers had been retrenched, but not physically removed from their Moresby barracks. Others pointed to a culture of indiscipline and impunity. Some noted that the police were no less of a concern.

There are certainly many countries which are less stable and have worse economic performance than PNG. But the weakness of PNG’s public institutions is borne out by the international evidence. The World Bank regards a country as “fragile” if it scores 3.2 or less out of 5 on its Country Policy and Institutional Analysis rating system. Overall, PNG gets 3.3, which puts it just above the fragile state category. (Solomon Islands, also mooted as part of the new regional approach, scores only 2.9.) PNG scores well for economic management and policies.  But it scores poorly for public sector management and institutions (3.0), and very poorly for social inclusion (2.7).

That its public institutions tend towards dysfunctionality is uncontroversial in PNG. On Friday last week, I attended a “Q&A” in Port Moresby, a recent innovation. The panel included two rising stars, one from Government  – the Minister for Planning, Charles Abel – and one from the Opposition,  the Governor for the Province of Oro, Gary Juffa. It was an interesting discussion, but, unlike the Q&A we watch here in Australia on Monday nights, there was no debate. The theme for the forum was public sector accountability, and both sides agreed that there was virtually none.  At one point, the Minister for Planning commended the Oro Governor for trying to improve public administration in his province which was, the Minister said, at “ground zero.” The Governor’s only disagreement was that he didn’t think that “zero” was an adequate description for how bad things were in his province.

PNG’s public sector weaknesses will be exposed by the new asylum seeker agreement. According to a recent UNHCR assessment, PNG’s legislative framework for asylum seekers is inadequate. But, whatever the legislative problems, the real weakness in PNG is implementation: getting things done.

We have already seen this in the recent history of Manus itself. The Manus Island solution was resurrected by the Gillard Government almost a year ago. Despite intensive effort, construction on a new detention site has been greatly delayed. Australian media reports conflict on whether construction on Manus has now started, but my sources on Manus state that it has not, though apparently the contract has now been awarded, and a site surveyed.

Without a permanent site, only a couple of hundred asylum seekers can be sent to Manus. Expanding capacity for the permanent facility from the current target of 600 to the mooted 3,000 would require another massive effort, and cause further delay. Building a new project on another site outside of Manus would be even more difficult, as the entire process of seeking agreement would have to start anew.

Resource developers know that to make a project happen in PNG you need to get the agreement of not only the national government, but also the provincial government, and landowners. All three levels of players have an effective veto over every project, and getting the agreement of all of them takes considerable time.

At best, Rudd has the support of the national government for his new approach, though the public response in PNG seems to have been uniformly negative, and how long that support will remain if it is tested by a large number of arrivals is unknown.  At the provincial level, even now,  Manus MPs are asking for more, including, an international airport – and why not ask for the impossible if you hold a veto over the necessary? Landowner agreement for a large expansion of the Manus processing site, or for any new site, will also be time consuming, and could be withdrawn at any time, as we have seen on Manus itself.

PNG’s implementation challenges will also threaten the Rudd solution once asylum seekers arrive in country. Manus has been run as an Australian project, but the longer asylum seekers stay in PNG, the less Australian control there will be and the more chance of a something going badly wrong. The PNG police sent to Manus have already caused trouble, and been sent back. Disease and violence are problems that many PNGians are all too familiar with. They are unlikely to tolerate special privileges being given to resettled refugees. But Australians are unlikely to tolerate refugees who have sought asylum here living in conditions of poverty and risk elsewhere. Either way, popular support on both sides of the border will be hard to sustain.

Imagine if we had seen the truckloads of rampaging soldiers at the medical school on our TV screens. Would the Rudd announcement still have gone ahead? The attack certainly doesn’t align with the Rudd narrative of PNG as “an emerging economy with a strong future.” It does align with the reality of PNG, a country of both exciting economic opportunity and profound governance challenges. And it illustrates why the new agreement is high in risk and low in credibility.

Professor Stephen Howes is Director of the Development Policy Centre. He was in Port Moresby last week.

Stephen has also written on the aid implications of the PNG asylum deal.