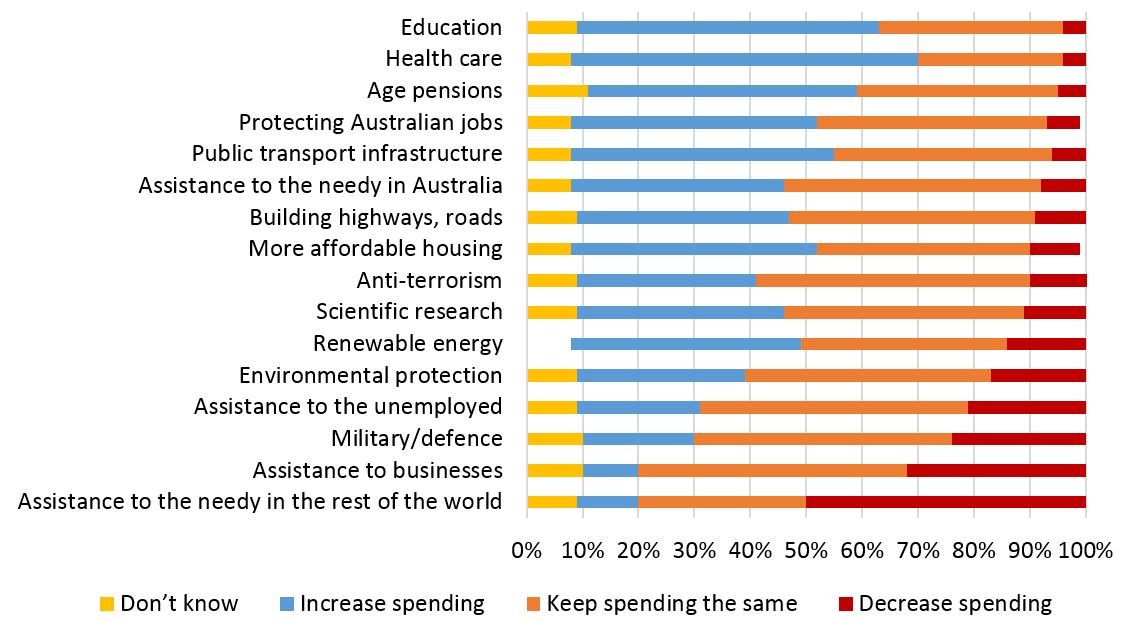 A week out from the unveiling of the 2017-18 Federal Budget, the results of new opinion polling released by The Guardian today show that foreign aid continues to hold the unfortunate title of the least popular area of government spending among the Australian public.

50% of respondents to the poll indicated they would like to see “assistance to the needy in the rest of the world” decreased. Just 11% of respondents wanted to increase foreign aid spending, and 30% think that spending should be maintained at the current level. (9% of respondents ‘don’t know’).

To put the public’s low opinion of aid spending in context, assistance to businesses (32%) and military/defence spending (24%) were the second and third most popular areas for spending cuts, respectively. Full results of the poll are shown below (and can be accessed here).

“The federal budget will be announced on Tuesday 9 May. Do you think the government should increase, decrease or keep spending the same for…” 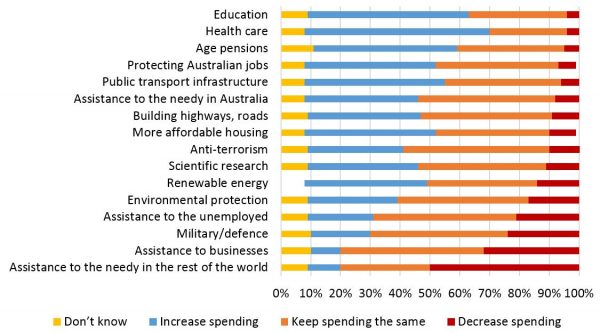 Though a 50% approval rating for cutting aid might seem dismal, it’s worth noting that these latest results can actually be interpreted as a rise in approval for aid spending over the last three years. In May 2014, a similar poll examining approval for decisions made in the now-notorious 2014-15 Federal Budget found that 64% of respondents approved of freezing foreign aid. And in March 2015, a poll question that we commissioned found that 57% of respondents preferred that foreign aid be cut rather than allowing the national debt to increase, raising taxes, or cutting spending in other areas (see the discussion in this paper). The most recent poll results also reinforce the impression, which Terence Wood wrote about last year, that the Australian public has generally wearied of cuts to aid.

Aid advocates will also be reassured by the apparent confirmation from Scott Morrison yesterday that foreign aid is not on the chopping block in the upcoming budget. Noting that the ‘aid program is now focused on not-for-profit organisations in places such as Papua New Guinea’, the Treasurer said:

“That’s where we put most of our aid, into places like that – and we all know the dire straits countries like PNG are in – they’re our nearest neighbours and that also goes to the stability of our region, and so we have some broader regional responsibilities as the most prosperous economy in this part of the world.”

In addition to the remarkably candid description of PNG’s current situation, the statement is also notable in that it suggests, perhaps, that Morrison is u-turning for a second time on foreign aid.

For more on the 2017-18 Federal Budget, be sure to attend our 5th annual Aid Budget Breakfast, which will be held at Crawford School of Public Policy in Canberra at 9am on Wednesday 10 May 2017. The event will also be livestreamed here.