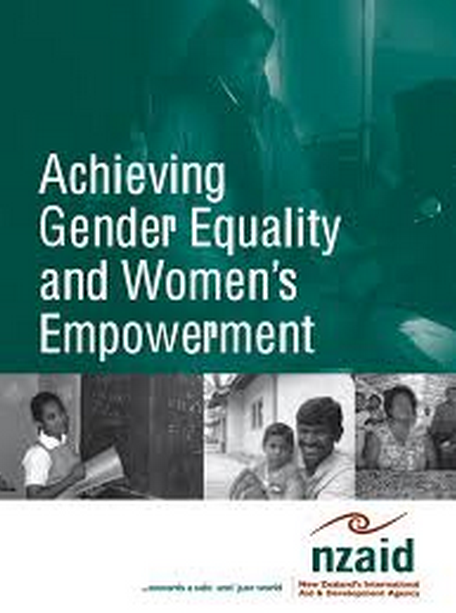 Around the world, girls and women face huge challenges, only for the fact of their sex: from getting health services, education, and jobs, to owning property. Unfair legislation, policy and cultural beliefs impede girls and women from thriving and realising their potential. To address this gender inequality, many governments, NGOs and other institutions turn to gender mainstreaming. Put simply, gender mainstreaming is the practice of critically assessing the implications of policy, process, legislation and projects on women and men, with a view to promoting and ensuring gender equality. For my Masters thesis, I investigated the implementation of gender mainstreaming in the New Zealand aid programme since 2000. Here I discuss what I found and provide some suggestions about how the current New Zealand government can improve its work for gender equality and women’s empowerment.

According to a 2001 review of ODA (p. 43), New Zealand was the first donor in the OECD to implement a gender policy, in 1998, but it wasn’t until 2002 that the New Zealand aid programme implemented gender mainstreaming for the first time. This focus on gender mainstreaming was part of new reforms and improvements occurring with the establishment of NZAID (the New Zealand Agency for International Development), which aimed at implementing global best practice across New Zealand’s aid programme. On the surface, there were positive changes: gender was Cabinet mandated to be mainstreamed across the work of the agency (along with human rights and the environment); and a new Gender Advisor position was created. However, the reality was more complicated.

It took five years between the creation of NZAID and the release of the official gender policy. It was a comprehensive policy that sought to make real change in the lives of women; however it is unclear why it took so long to be made official (a draft version was in use at the time of the Ministerial review in 2005). A 2005 Ministerial review found that the Human Rights desk had been empty since its creation in 2002, and the Gender Specialist position had also been left largely un-staffed, being filled at the time of the Review by a secondee from the Canadian International Development Agency. Overall, the Review commended the work that was being done, although noted that gender mainstreaming required deep analysis and influence in strategies and resource allocation, something that went beyond the small projects for women that existed at the time.

In 2009, New Zealand’s official development assistance again experienced big changes in direction and structure. Gender equality and women’s empowerment did not escape the effects of these changes. While Cabinet recommitted to having gender, along with human rights and the environment, as cross-cutting issues, the Minister of Foreign Affairs and Trade quickly became known as unsupportive of gender equality and women’s empowerment in aid. In response to a question about where gender fits into New Zealand’s aid to the Pacific, following a speech at the Resilience in the Pacific Conference in February 2011, the Minister stated gender was “not the preoccupation I bring to the projects that come to me”. The suite of policies NZAID had developed were rendered void, including the gender policy. Even with gender as a ‘cross-cutting issue’ (essentially the same as gender mainstreaming), with nothing left to fill the policy vacuum and a negative view of gender from the highest levels of the organisation, staff were left unsure of where gender equality and women’s empowerment stood in the programme’s work.

Today, five years on, the comprehensive gender policy of NZAID has still not been replaced. Instead, the New Zealand Aid Programme has a wide range of documents outlining their overall strategies, sector priorities, gender analysis guidelines, guidelines on environmental and social impact and ‘knowledge notes’ on ‘gender and –‘ various topics, such as disasters and tourism. There are a lot of documents, but there is little substance on what the Aid Programme is actually working towards, especially when it comes to gender equality and women’s empowerment. The gender advisor role was cut to 0.5FTE – meaning that there is less resource available to support staff of the aid programme to implement gender mainstreaming. The New Zealand Aid Programme has emphasised that its focus for gender is on up-skilling its own staff, but it is difficult to see how this is possible with such little investment and resource available.

For gender mainstreaming to work, an organisation needs strong direction and clarity as well as commitment to including gender issues and women’s empowerment in its work. The programme’s focus on economic development and infrastructure projects, such as roads, fisheries, construction, energy – traditionally male dominated sectors – presents a challenge to advance gender equality and women’s empowerment within its work, as DAC analysis shows is the case for most donors. For NZ’s focus in the male-dominated Pacific region, increasing women’s involvement in these sectors is a particularly acute challenge that requires a robust gender mainstreaming approach.

There has been regional progress in advancing women’s rights. In recognition of the need, in 2012, Pacific leaders (including NZ and Australia) signed the Pacific Leaders Gender Equality Declaration at the Pacific Islands Forum in the Cook Islands. The agreement commits governments to eliminating barriers to women’s economic participation and eradicating violence against women, as well as legislating commitments to women’s rights. Yet to have effect these agreements require not just verbal commitment, but prioritising and resourcing, by Pacific Island nations and also by donor countries like New Zealand.

So what now? The anticipated agreement later this year of the global post-2015 agenda presents a potential turning-point for the New Zealand government, offering an opportunity to examine how it will meet the gender components of the yet to be confirmed Goals. At the very least, the government can ensure it promotes the inclusion of gender equality, commitments to end violence against women, and sexual and reproductive health in the final United Nations negotiations about the Goals.

Back at home, an important start would be clear, evidence-based policy and strategy on how to achieve the Pacific Leaders’ Gender Equality Declaration, along with appropriate financial commitment for implementation. Complete buy-in to the importance of gender equality and women’s empowerment, from all levels of the NZ Aid Programme and the wider Ministry of Foreign Affairs, is also essential for effective gender mainstreaming. Without this, addressing the inevitable gendered issues that are present in all development activities is just a ‘something nice to have’ when we can, when it’s easy, and that just isn’t effective.

Pip Bennett is a consultant based in Costa Rica. Her background is in children´s and women´s rights, focusing on youth participation and gender mainstreaming. Her Masters thesis (2013) looked at how New Zealand Official Development Assistance has integrated gender mainstreaming into its policies since the year 2000.

Pip Bennett is a consultant based in Costa Rica. Her background is in children´s and women´s rights, focusing on youth participation and gender mainstreaming. Her Masters thesis (2013) looked at how New Zealand Official Development Assistance has integrated gender mainstreaming into its policies since the year 2000.