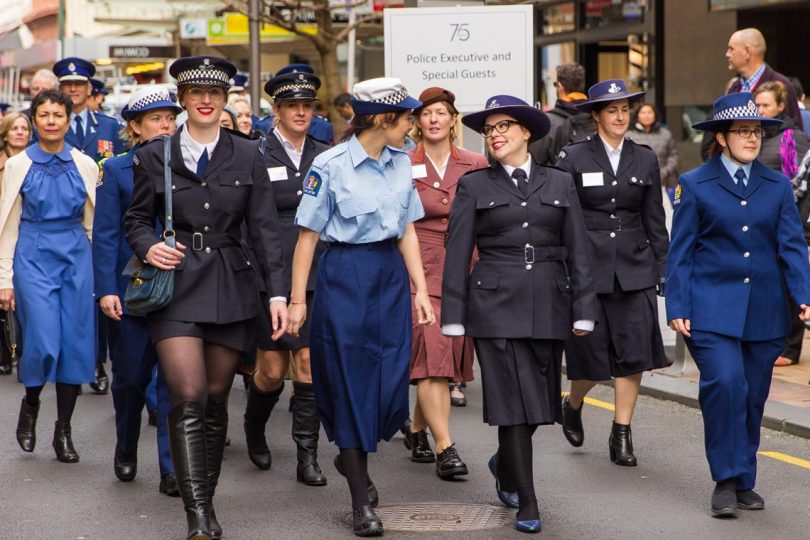 New Zealand policewomen mark 75 years of participation in the service in Wellington in 2016. Photo: Office of the Clerk, NZ Parliament

2020 is the 20th anniversary of the Women, Peace and Security (WPS) Agenda. It is also the year that New Zealand will launch its second National Action Plan (NAP) outlining how government agencies plan on supporting that WPS agenda over the next few years. Critics of New Zealand’s first NAP noted shortcomings in terms of its narrow focus, lack of resourcing, lack of monitoring and lack of engagement with civil society, so it is important to note that a renewed process is currently unfolding – one that is seeking to address some of these concerns.

In 2000, UNSCR1325 blazed a trail for a suite of UN resolutions aimed at: the prevention of and protection from violence (particularly gendered violence); the increased participation of women in decision making, roles of authority and peace processes; and an improved approach to including gender considerations in relief and recovery efforts. Today, the WPS agenda encompasses a family of ten resolutions: UNSR1325 (2000), 1820 (2008), 1888 (2008), 1889 (2009), 1960 (2010), 2106 (2013), 2122 (2013), 2242 (2015), 2467 (2019), and 2493 (2019). These resolutions speak to the specific challenges faced (such as gendered violence, terrorism and violent extremism, exclusionary peace processes, impunity) and opportunities available (such as criminal referrals, sanctions, reparations, technical skills, multi-sectoral collaboration, arms controls, sexual and reproductive health, resourcing) for promoting and protecting women’s rights in conflict and post-conflict situations by the United Nations system and its member states.

Since 2004 UN member states have been encouraged to formulate ‘National Action Plans’ to map out how they are seeking to achieve the aims of this broad WPS agenda. Successful NAPs have typically resourced WPS efforts, engaged with civil society and had clear monitoring and evaluation systems built into their institutional structures from the beginning.

New Zealand has long voiced support for gender equality initiatives in the UN and in other settings but was notably late to the fray in launching its first NAP in 2015. Initial consultation on the formulation of the NAP was had with civil society through a day-long workshop and via written submissions. While there has been ongoing discussion of the WPS NAP at every meeting of the Ministry for Women’s International Women’s Caucus, initiated by the Ministry and Peace Movement Aotearoa, civil society engagement by the Ministry of Foreign Affairs and Trade (MFAT) has lapsed, reporting has been weak and patchy, and monitoring and accountability – as well as all-important resourcing – are lacking. Counter to the written submissions from interested NGO groupings, the first NAP was also quite narrowly focused on two main objectives: “increasing MFAT support for WPS initiatives” on a global stage, and increasing the presence of police and military women (in terms of the number of women in these institutions generally, in senior roles, and those deployed abroad).

Importantly then, efforts are afoot to broaden civil society engagement with the WPS agenda. This is occurring via complementary processes – with increased activity and engagement driven by civil society actors coming ‘from below’, and with senior authorities concurrently promoting the relevance of the agenda ‘from above’.

New patterns of engagement and new sites of enthusiasm are emerging. In early April 2020, a group of NGO representatives and academics with a keen interest or background in WPS were invited by Peace Movement Aotearoa, Oxfam, NZ Red Cross, NZ Alternative, and academics from Massey University to an initial workshop to begin to discuss their concerns and to prepare submissions for the second NAP. This group included representatives of the National Council of Women, World Vision, Women’s International League for Peace and Freedom (WILPF), Business and Professional Women NZ (BPWNZ), and the NGO-umbrella organisation the Council for International Development (CID), as well as academics and postgraduate students from Massey, Auckland University and the National Centre for Peace and Conflict Studies. MFAT also ‘lent in’ to this process, with a representative attending the workshop to outline current thinking and inviting participation in addition to more informal discussions carrying on between civil society representatives and representatives from MFAT, Police, NZ Defence Force and the Ministry for Women.

In terms of common concerns raised in this workshop, these representatives highlighted a need for the second NAP to require fixed budgets for WPS activities, to galvanise political will, and to formalise engagement with civil society actors. Representatives also expressed the need to consider broader issues such as climate change, natural disasters, pandemics, sexual and reproductive health and food security as part of the agenda – while also advocating for gender analyses and perspectives to be integrated into all security and development programs. Express recognition and ownership of New Zealand’s own domestic and gender-based violence issues was called for, as was a greater emphasis on conflict prevention and education and the central role and needs of indigenous peoples, migrants and refugees. Increasing impact (not just output) and institutionalising strong mechanisms to help monitor and evaluate this impact were emphasised, as was an overarching emphasis on centring women’s empowerment.

With such priorities having been clearly identified by New Zealand’s key civil society actors, there is now much to be done to help create a newly ambitious approach to delivering on the WPS agenda. Moreover, it appears as if there is enthusiasm for increased participation both from civil society and from government sources – so much more can, potentially, be done.

In terms of next steps, MFAT is due to release its first draft of the new NAP imminently. Submissions will be called for. There is a ready cadre of organisations ready to engage, but this brief report is also intended to act as a call to other associations that might not yet be aware of the relevance or importance of the WPS agenda to their cause. The current process that is unfolding is an example of a ‘democratisation’ of foreign and security policy. This democratisation can reach further. To that end, interested persons can nominate themselves to engage in this developing debate, and to progress the WPS agenda further, by emailing the host of the NZ WPS civil society group on icanz@xtra.co.nz.

B.K. Greener is an Associate Professor in Politics and International Relations at Massey University who publishes in the field of international security.