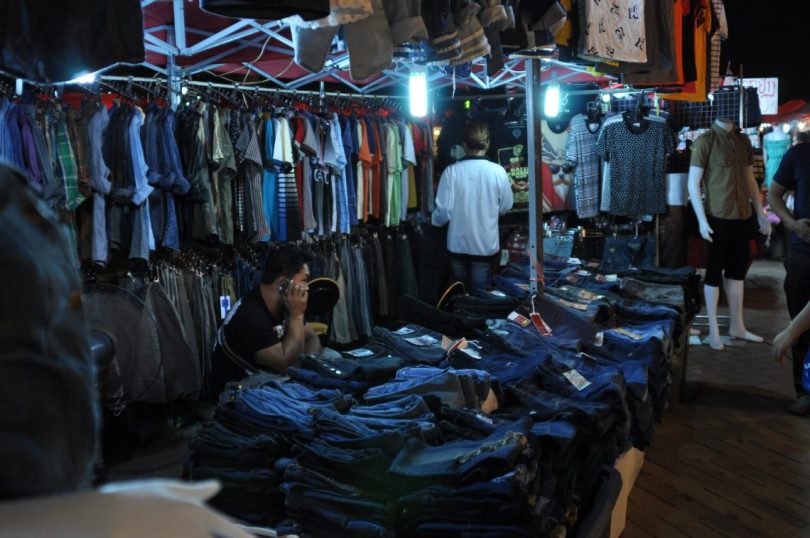 A shop selling clothes at the Vientiane night market before the COVID-19 lockdown (Credit: Shankar S/Flickr CC BY 2.0)

13 to 16 April was Pi Mai, the Lao national holiday that welcomes in the Buddhist new year. Usually characterised by festive gatherings, water fights and the consumption of large quantities of Beer Lao, this year it was quiet and subdued, as the country of seven million entered its third week of COVID-19 mitigation.

Laos has been under lockdown since 29 March when Prime Minister Thongloum Sisoulith ordered all non-essential activities and travel to cease in a bid to prevent the spread of the disease that had not been officially identified until 24 March – relatively late in the scheme of things. While only 19 cases had been identified as of 27 April (as a result of 1796 tests), the government is taking prudent measures given the high risk of the pandemic overwhelming its health system.

In line with predictions by the International Monetary Fund and Asian Development Bank, among others, of zero growth for 2020 across Asia, the impact of both internal and neighbouring lockdowns on Laos’ economy has been immediate. Formal sectors that dominate the economy, such as tourism, hydropower, and mining, have ceased or slowed to a trickle. The majority of businesses are informal, relying on face-to-face, cash-based transactions, and unlikely to benefit from government support measures, such as income tax cuts or low-interest business loans. Lao businesses – formal and informal – already struggle to compete with Vietnamese, Chinese, and Thai counterparts at the best of times when targeting both domestic and international consumers with their products. The country’s relatively weak participation in regional value chains is likely to suffer even further as a result of the global economic downturn, as government and foreign aid efforts turn to other priorities.

Like its neighbours, Myanmar and Cambodia, Laos is in the first stage of mitigation, characterised across the world by intensive social distancing. Even as countries move beyond that phase and begin to loosen their immediate lockdowns – China, South Korea, Japan and now Vietnam, for instance – a range of social distancing measures remain in place and will likely stay with us for some time.

In many countries in the region, e-commerce (commercial transactions conducted on the internet) is likely to be an important pillar of a medium- to long-term strategy to support businesses in their bid to survive the impact of the pandemic on the economy. In Laos, however, the sector needs work. According to the government’s Trade Facilitation Roadmap 2017-2022, Laos’ income from exports is less than half of neighbouring Thailand and Cambodia and less than a third of Vietnam’s due to the lack of a sufficient policy enabling environment. Although there is a draft Decree that would provide the impetus for the development of the necessary legal and regulatory framework, it has not yet been officially endorsed.

At the consumer end, the potential is there. Laos has more than 5.7 million mobile phone users, and around 2.1 million of those use internet online at rate that is estimated to be growing at around 18% per year. Yet local businesses, banks, and consumers lag behind on using ICT for transactions, and poor last-mile logistics impede delivery of products. The draft Decree reportedly favours consumer protection and regulation of businesses, many of which operate informally via social media. While both are important, in order to grow, the sector needs a strategic approach to encouraging its development.

The urgent need for innovation arising from the pandemic is an opportunity to increase direct support to micro, small, and medium enterprises (MSMEs) on e-commerce, and speed up e-commerce adoption in Laos. That, in turn, would reduce costs for both exporters and consumers, and level the playing field among MSMEs participating in local and international trade, by removing economic barriers to marginalised and remote communities.

As part of our E-Commerce Aid for Trade Fund project (funded by the Australian Department of Foreign Affairs and Trade), over the past few weeks the Asia Foundation has convened a number of discussions between MSMEs – mainly working in agriculture and textiles – and local content developers and IT companies to work through specific problems and plan some solutions, which the project will support. The immediacy of the pandemic is pushing MSMEs, some of which are already attempting e-commerce with varying success, to seek new markets and enhance their participation in fast-changing value chains. We’re also supporting research to inform legislative changes needed to overcome e-commerce bottlenecks.

Priority concerns include the high cost of shipping, difficulties in online payments, and the need for human resource development in the areas of marketing, e-commerce in general, and customer service. Many of the MSMEs we’re working with rely on tourists and other foreign markets. They have felt the immediate impact of both restricted movement as a result of lockdowns, and decreased purchases by consumers brought on by real or anticipated economic hardship. By bringing in the necessary expertise to address these gaps — e.g. through training, advisory services, or the development of technological solutions — we’re hoping to support them to get ahead of the curve. Documentation of this process will contribute to a more concrete picture of the economic impact of COVID-19 on MSMEs in Laos – and in the region more broadly – about which there is extensive speculation and anecdotal evidence but very little concrete data.

Laos aims to graduate from Least Developed to Lower Middle Income Status by 2025. The dampening of economic growth globally endangers that aspiration. Laos’ response to the health threat has been proactive, given the limited resources of its government. With encouragement and tangible support, its economic response might similarly seize opportunities to fast track efforts to innovate and help the local economy survive the coming storm.

This article is co-published with The Asia Foundation. This post is part of our #COVID-19 and Asia series.

Tamara Failor is a Program Director based in The Asia Foundation’s Laos office. Tamara manages parliamentary strengthening, economic governance, urban governance, and counter trafficking-in-persons projects and advises our large access to justice program on gender and monitoring and evaluation