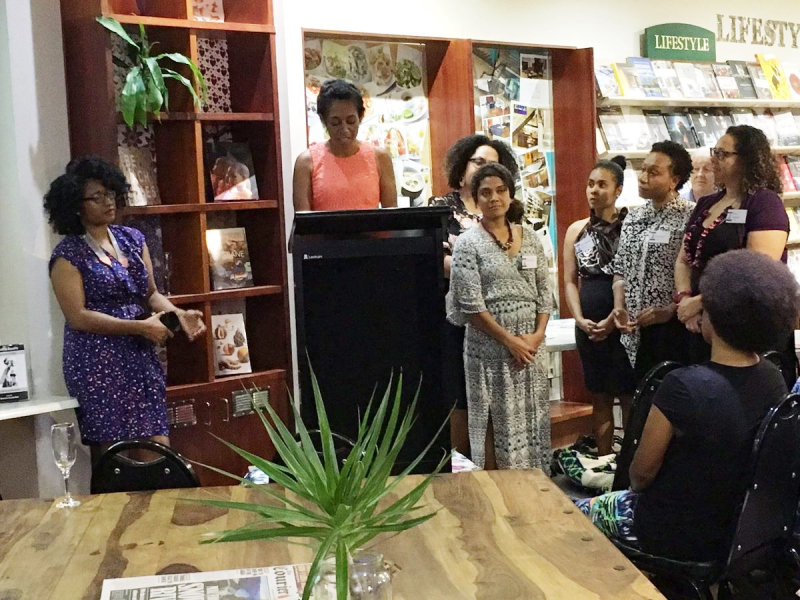 Rashmii Bell speaking at the Brisbane launch of 'My Walk to Equality' (Credit: PNG Attitude blog)

I recently caught up with Rashmii Bell over lunch in Brisbane, and asked about her background and experiences as an author. Listen to the podcast, read the transcript, or for highlights of what we discussed, read on.

I began by asking Rashmii to tell me about her background, and what she is currently involved in.

Rashmii hails from Sio, Morobe Province in PNG, having being born and lived in Lae, as well as Port Moresby and (presently) Brisbane. She was educated in Australia, and has lived between there and PNG since 1990. She studied at Griffith University, obtaining a degree in psychology and criminology. She has more than ten years of experience working in case management within adult and youth corrections services.

I’m a little past nine years while I’ve been at home. I’ve just been raising children. But, I’ve always enjoyed reading. I read everything, read every day. And writing, I have been writing for myself, but I only just started having my work published in the past three years…

…appearing at the writers’ festivals, the Sunshine Coast festival this year, and then Brisbane Writers’ Festival, both in 2016 and 2017, which has really, I think, for the majority of the emerging contemporary PNG writers, that’s a huge thing for us to know that Papua New Guinean literature is being mentioned at these international events.

In a similar vein, I asked Rashmii what she thought were the things that had the most influence on her voice as an author. She explained to me that she focuses on long form writing, with her pieces best classified as opinion and commentary. This is not a genre favoured by many Papua New Guineans and, among those that do, there are very few women, ‘…so I think that in itself helps elevate my voice because I am the minority in amongst the commentators out there, among the PNG men.’

In addition, the subjects she writes on – social justice, human rights, gender issues, and mental health – are ones that are not covered widely by other authors from PNG:

So, I think that’s another thing that helped shape my voice, where I see there’s a gap in issues being dealt with, addressed by Papua New Guineans, I’ve tried to concentrate there to give the PNG voice to add to the whole dialogue there.

Next, we considered what the future might hold for literature and publishing in Papua New Guinea, especially with regard to long form writing. Having noted the very limited options available for publishing in PNG, other than through self-funding, I asked Rashmii whether she thought this was a gap in her country’s development; one that could be compared with infrastructure or health:

Absolutely. I think that literature itself should be looked after, or at least be an area of focus for the tourism, culture, and arts; that portfolio within the government. I mean if we can have singsings festivals, cultural festivals, and sporting events throughout the country, then why can we not have literary festivals to celebrate our writers, our playwrights, poets, the theatre, all that?

Not only that, Rashmii sees this as an area where development partners can play an important role. This could include using programming (e.g. in education and literacy) to develop and promote home-grown literature as key resources, and supporting Papua New Guinean authors (and those from elsewhere in the Pacific island region) to promote their work overseas, whether at literary festivals or in other forums.

Focusing more specifically on the place of long form writing in the PNG literary landscape, this is an area where Rashmii sees some gaps that need to be filled:

…what’s really missing in PNG, I find, is…commentary coming from our universities or from the thinktanks, the institutes up there that are doing research, but they don’t commentate on a regular basis…it’s a loss to the nation, to the people’s understanding about what’s happening to the country…we have Australians talking about everyday matters that are happening in PNG, and they are academics and researchers…and they’re writing opinion commentaries. And I think without Papua New Guineans seeing that happening in the country, this opportunity to see it and to practise long-form writing yourself, it’s not going to happen.

I was keen to open up the conversation to explore Rashmii’s experiences and observations as a member of the PNG diaspora living in Australia. I asked her to delve a little more deeply into a comment she had made recently about being ‘in constant transit between two societies: Australia and Papua New Guinea. She reflected on the differences between the two countries and identified a number of ways in which the cultural norms of PNG affect many aspects of how she navigates that environment, whether it’s in relation to what she wears or who she feels she is able to speak to or in front of. It was clear that this is something very significant and influential:

…you always have to be mindful of those things. And so, that carries over to my writing as well, because…I was educated here in Australia, so I have a very…Western view of looking at things, and I think things like gender equality, that’s something that I’m really passionate about ..But I think, when I’m back home, it’s hard to articulate that without having the cultural values and the beliefs influencing it too much…

So, more broadly, what does Rashmii see as the role of the PNG diaspora for the future of her country of birth?

I think it’s about increasing perspective, having different perspectives to the conversation back home, because otherwise, it’s just the same old rhetoric talking about the same thing over and over. So, the diaspora, I think, are very important in terms of bringing perspective to the national conversation, and I think…we may have more confidence in doing that.

Within this, what is the role of the My Walk to Equality project, which provided a platform for numerous members of the PNG diaspora?

…the writers from My Walk to Equality, we have women that have been educated in Australia and elsewhere throughout the world, who are adding their perspectives and trying to highlight to women back home, and to men as well, that whilst Papua New Guinean women are saying this back home about gender equality, why it’s necessary, this is another perspective…

Rashmii Bell has established herself as a critical voice in the PNG landscape and we can look forward to hearing more from her in the near future.

Rashmii Bell is an author who edited the first-ever anthology of writing by Papua New Guinean women, 'My Walk to Equality'. Her essays and opinion commentary are regularly published via the prominent Australia-PNG relations specific blog, ‘PNG Attitude’ and the Crocodile Prize Anthology volumes publication. She was recently awarded the inaugural 2018 Paga Hill Development Company ‘My Walk to Equality’ Writer Fellowship.