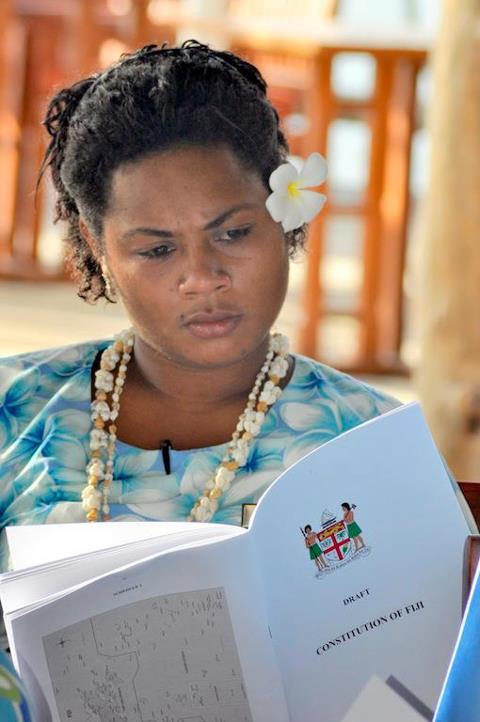 Fiji has extended the draft constitution submission deadline until April 26th. The extension comes amidst heightened levels of criticism of the draft constitution in its current form. The Citizens Constitutional Forum released a report (pdf) outlining its main concerns, the United Front for a Democratic Fiji held a public meeting and Rewa high chief, Ro Teimumu Kepa, led a delegation through Suva to deliver their rejection of the draft directly to the Attorney General’s office. Prime Minister Frank Bainimarama responded by suggesting the draft was being ‘misrepresented’ by certain individuals and NGOs.

Bainimarama also recently revealed the current government would be joining him to form a political party that will seek election next year. Whether there will be any other parties remains to be seen, with the registrar yet to give any contenders the all-clear sign to run.

Meanwhile, former prime minister Laisenia Qarase was released from prison last week, having served seven months of a one-year term. But given restrictions under the draft constitution, Qarase looks set to be excluded from the proposed 2014 poll.

The US department of defence recently announced the deployment of a sophisticated missile defence system to Guam as a precautionary move following renewed ballistic missile threats from North Korea. Defense officials also announced a delay in the launch of a Minuteman 3 missile, because of concerns the test might be misconstrued by North Korea. While the people of Guam are familiar with military build up, Governor Eddie Calvo said the government is providing information to help residents prepare in the event of a nuclear attack. The threats from North Korea are a reminder that hosting military bases places Pacific Island countries at some risk if military conflict were to occur.

Against public objections, Solomons MPs give themselves bigger funds

The Solomon Islands Parliament last month passed the Constituency Development Funds Bill 2013, in the face of strong public opposition. The new law establishes ‘slush funds’ under the control of MPs, supposedly to assist social and economic development of their constituencies. Such funds have existed for many years as appropriations in the national budget, but without legal status and on a much smaller scale than is now planned.

Opposition to the new law was coordinated by Transparency Solomon Islands with internet-based Anti-corruption Network Solomon Islands and Forum Solomon Islands International.   The bill was introduced in a rush and strongly backed by the PM and Ministers, suggesting to some observers that it was the price of holding together the current government.

The departure of Papua New Guinea’s final forces stationed in the Solomon Islands has coincided with the deployment of the last planned Australian Defence Force (ADF) contingent of peacekeeping soldiers, who will serve alongside soldiers from Tonga. RAMSI’s peacekeeping component has been winding down for some time, although Major General Robert Blackwood envisages Australian soldiers ‘going over there past the 30th of June this year’. The Solomon Islands Minister of Police and National Security, Chris Laore, disagrees, stating in parliament that RAMSI troops will be gone by July, and that only civilian personnel will stay on.

Meanwhile, the last group of ADF members stationed in Timor-Leste has returned to Australia, marking the end of a 14-year involvement. Australian Defence Minister, Stephen Smith, visited the country on April 5th and outlined Australia’s continued involvement with Timor-Leste through the Defence Cooperation Program.

The UN high-level panel of eminent persons working on a new global development agenda met for the third and final time to consider what should replace the Millennium Development Goals (MDGs) after they expire in 2015. The Bali meeting focused on forging a new global partnership between rich and poor countries, with the regulation of tax havens and illicit financial flows as an important aspect of achieving new development ambitions. Tackling revenue loss through tax avoidance and corruption was welcomed by NGOs and developing countries, with 2007 World Bank estimates putting the amount of stolen assets globally at between $20bn and $40bn. The push for greater international action on tax and corruption came as Cook Islands, one of a number of Pacific tax havens, was implicated in an international exposé of the closely guarded investment information of more than 100,000 people around the world.

The PNG government has announced it will restructure its ownership of mining, petroleum and state-owned enterprises. The Independent Public Business Corporation and PNG’s Petromin Holdings will cease to exist under the reforms, with the state’s ownership of all its ventures vested in three new “Kumul” entities, who will own the PNG government’s petroleum, mining and other companies respectively. While the Kumuls are reported to be holding companies, it is also reported that a Kumul trust will be established. Trustees will include current and former prime ministers of PNG. Reactions have varied with few details having been announced. The reaction on the Masalai blog to consolidating ownership structures was positive. The executive director of the Institute of National Affairs, Paul Barker, was more circumspect, arguing that reforms might work if the trusts were answerable to parliament. The Prime Minister promised legislation by September.

In other mining news, Prime Minister O’Neill has reaffirmed the PNG government will seek greater control over Ok Tedi, the country’s largest mine in which the government has a minority share at the moment. The prime minister has also placed strongly worded advertisements in local newspapers that criticise BHP involvement in PNG Sustainable Development Program, Ok Tedi’s main shareholder.

Samoa Air Limited Chief Executive Chris Langton is making no apologies for charging passengers according to their weight.  The widely reported change to the small carrier’s pricing model has been the focus of criticism by some who argue that the model is discriminatory.  According to the World Health Organization, more than half of 20 year olds in Samoa, Tonga and Nauru are obese.

Meanwhile, a Pacific expert on non-communicable diseases (NCDs) is using the airline’s pricing model to emphasise the value of healthy lifestyle choices. Head of the Pacific Lifestyle Division of the Secretariat of the Pacific Community (SPC), Dr Viliami Puloka, is heeding the criticism of discrimination, but insists that health promotion and awareness is a serious universal issue.

PNG Telikom recently announced a 68% reduction in wholesale internet fees. This comes on the tail of a recent announcement by NICTA [pdf], Papua New Guinea’s telecommunications regulator, that it was prepared to require infrastructure sharing on the country’s submarine cables as a means of improving access to internet. The news was well-received by commentators. In related news, Network Strategies, a New Zealand-based consultancy, released a report detailing Digicel’s rise to dominance in the Pacific. The report suggests that complacent, underfunded incumbents were partly to blame for their poor performance in competition with the company. Lack of robust competition, the report says, is hampering the affordability of mobile services for consumers.

With the expiration of the Treaty on Certain Maritime Areas in the Timor Sea (CMATS), analysts are asking whether relations between Australia, Timor-Leste, and potentially Indonesia, could fray. In January, Timor-Leste ratified the United Nations Convention on the Law of the Sea.A visit by now former Australian resources minister, Martin Ferguson, demonstrated the difficulties of the situation— his counterpart, Mr. Alfredo Pires, stated that Timor-Leste was searching for a way to withdraw from the treaty without ‘engaging in a confrontation with the Australian government’. Mr. Ferguson’s replacement, Gary Gray, is a former advisor to Woodside Petroleum— a situation some have suggested could lead to a conflict of interest.

Despite its tiny size, Timor-Leste has a reputation for acting boldly, pursuing large resource companies over royalties. Prime minister Xanana Gusmao recently reminded small, poor-in-GDP yet resource-rich countries like his own, that together, they represent significant political and economic influence.

The dates for the 44th Pacific Islands Forum have been announced.

Vanuatu has recalled its ambassador to China and revoked the appointment of its Roving Ambassador to Russia.

Kiribati’s state television has closed due to lack of funds.

A new Tongan newspaper, Kavai, has launched and will devote its editorial content to women’s issues, climate change, tourism and non-communicable diseases.

An atoll in the north of Marshall Islands is facing a water crisis.

A drug resistant strain of TB has resulted in another death and is causing alarm in Australia and PNG.