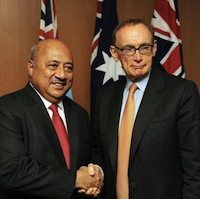 Further to a meeting between Australia, Fiji and New Zealand, the foreign ministers of each country announced the restoration of full diplomatic relations, including exchange of high commissioners and some relaxation of travel bans.

Former Fiji PM Laisenia Qarase was convicted on corruption charges and has been sentenced to 12 months’ imprisonment. The conviction is likely to mean that Qarase is unable to run for office in the 2014 elections. Yet to face court is ex-PM Mahendra Chaudry, the corruption charges against whom have been reduced by the High Court.

The 9th Parliament of PNG met despite not all writs having been returned and an attempt to challenge the constitutionality of its sitting by Belden Namah. Peter O’Neill was returned as PM with 94 votes. Although O’Neill has yet to announce the full details of his ministry, early indications are that Don Polye, Patrick Pruaitch and William Duma will be key players.

Julie Soso is the third woman to win a seat in the new PNG parliament. Taking the Eastern Highlands Provincial seat, she also becomes the country’s first female provincial governor. 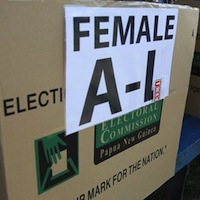 Vika Lusibaea has become the second ever woman to be elected to parliament in Solomon Islands by winning the by-election for the North Malaita seat. In a landslide victory, the new MP elect replaces her husband, former Malaita Eagle Force leader, Jimmy Lusibaea, who lost the seat following his conviction for unlawful wounding.

Women currently make up around only 5 per cent of parliamentarians across the Pacific.

Solomon Islands is still one of the few parties to the Convention Elimination of All Forms of Discrimination Against Women (CEDAW) that has never submitted a country report after cabinet refused to endorse a report prepared by the Ministry of Women, Youth and Children’s Affairs.

Samoa is considering new legislation as a UN report urges the government to prioritise measures to improve the status of women.

The inaugural Micronesian Women’s Summit ended in Palau with an announcement aimed at supporting foster children and their families in the north Pacific.

After much delay and controversy, President Toribiong of Palau signed the supplementary budget for 2012 into law, thus averting a shutdown of essential government services. 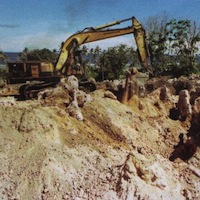 Growth to slow in the Pacific

Economic growth in the region is still expected to average around 6 per cent in 2012 according to the most recent Pacific Economic Monitor, released by the Asian Development Bank, but growth is expected to slow to 4.2 per cent in 2013. The large resource-exporting economies of PNG and Timor-Leste continue to drive growth throughout the Pacific, but also face the highest inflationary pressure.

High global demand for phosphate from Nauru has increased royalties paid to landowners and renewed interest in expanding mining operations. So far this year over half a million tons of phosphate was exported bringing in an estimated US$59 million in revenue.

The Marshall Islands Journal reports that as the price of tuna on the global market has doubled this year. The revenue collected by Parties to the Nauru Agreement countries (Federated States of Micronesia, Kiribati, Marshall Islands, Nauru, Palau, PNG, Solomon Islands, Tuvalu) for fishing in their waters has tripled to an estimated US$224 million. This increase is largely attributed to the PNA vessel day scheme that raised the fees paid by fishing vessels. With the eight PNA countries holding 25 per cent of the world’s tuna catch, the organisation continues to seek ways of capturing a greater proportion of the estimated US$3 billion industry.

Tonga is seeking to reduce its high fuel costs by shipping directly from Singapore. The current price of fuel imports via Fiji is about US$170 per tonne, and the switch could reduce the price to US$70 per tonne. 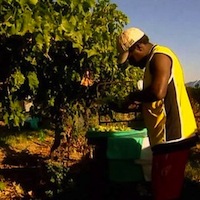 Australia’s permanent Seasonal Worker Program is now in place, but low caps have been set so that at most on average about 2,500 horticultural workers from seven Pacific island countries and Timor Leste will be able to participate every year for the next four. By comparison, the New Zealand Recognized Seasonal Employer scheme takes 7-8,000 workers a year. The recently concluded pilot scheme saw only 1,500 workers come to Australia since its inception in 2008, well below the 2,500 target. New pilots have also been put in place for tourism, cotton, sugar and aquaculture.

The Economist features a story about Chinese telecoms giant Huawei, which highlights security concerns about integrating the company’s equipment into key infrastructure. The company, which recently became the largest telco equipment supplier in the world, has just completed work on Vanuatu’s national e-government network and has agreements for similar projects in both PNG and Samoa, and an education technology agreement with Fiji. These initiatives reflect a growing trend in the Pacific to see telecommunications infrastructure as a neutral platform on which multiple information service providers compete. Tonga’s heavily subsidized, stakeholder-owned fibre-optic cable provides an example of this approach, which has only gained traction since the failure of the Pacific Fibre project to find sufficient private funding.