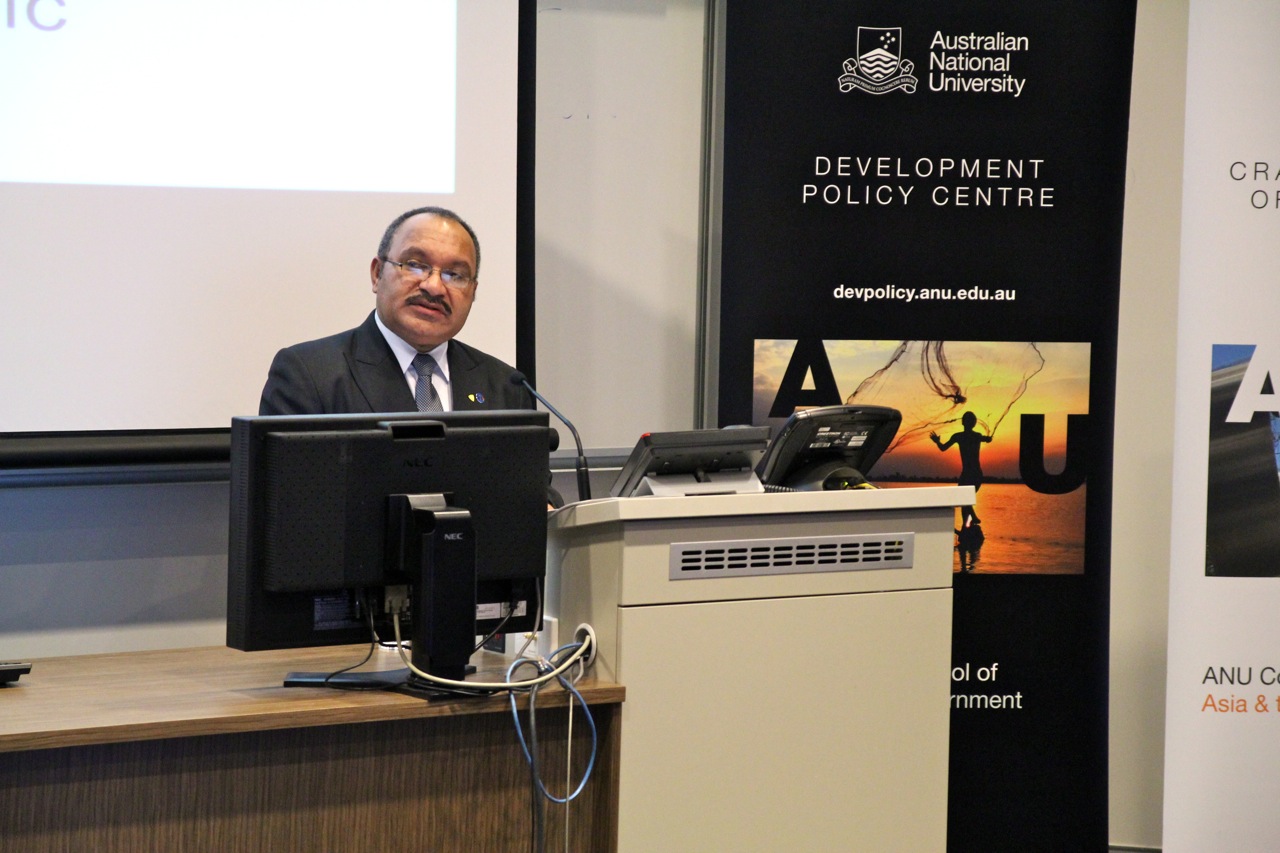 Fiji passed its budget at the end of November, and it has been cautiously welcomed by the international business community and excitedly embraced by the country’s Chamber of Commerce. The budget includes radical taxation cuts — some 99 percent of the population will see their taxes reduced or cut entirely.  The government will instead raise revenue from a hike in its airport departure tax (to $107, one of the highest in the Pacific) and tourism taxes. Leader Frank Bainimarama said the budget aimed to reduce poverty and stimulate the economy.

The PNG Government, after several delays, brought down its 2012 budget on Tuesday December 6. Watch the Devpolicy blog for further analyses of both budgets.

PNG Supreme Court to rule on legitimacy of O’Neill government

Reports of a split in the O’Neill-Namah government adds to uncertainty as the nation awaits the constitutional ruling of the Supreme Court on the election of Peter O’Neill as prime minister on 2 August. The decision of the court is expected on 9 December.

PNG blogs and discussion forums are lighting up in response to the claims of the minister for public enterprises, Mekere Morauta, of misappropriation by the previous government, and reports of missing funds showing up in Australian bank accounts. Increasing tensions between the government and opposition, as the former finance and treasury minister, Patrick Pruaitch, demanded an investigation into government spending. All this comes as PNG came last in a global corruption perception list.

In more positive news, the PNG Parliament passed its long awaited Equality and Participation Bill, which establishes 22 new seats reserved for women. However, the bill’s sponsor, Dame Carol Kidu (currently the only female member of PNG’s parliament), has expressed concern that the enabling legislation for the reserved seats to be enacted before next year’s election has yet to be passed.

Vanuatu becomes the 154th member of the WTO

Vanuatu’s National Parliament ratified the country’s accession to the World Trade Organisation on 1 December, ending 16 years of rigorous negotiation.  Vanuatu has been one of the fastest growing economies in the Pacific in recent years. Advocates say WTO membership will enable Vanuatu to participate more fully in the global economy and will provide the country with a predictable and stable basis for growth and development. However the decision to join the WTO sparked a debate in the country, with many, including the Vanuatu Council of Churches (VCC) remaining opposed to the government’s decision. Planned anti-WTO protests in the lead up to the ratification vote were banned by the government, a stand that has been widely condemned.

Meanwhile Samoa has come under criticism for lifting its ban on turkey tails as it seeks to finalise its bid for admission to the WTO later this month.

As the UN forecasts PNG’s population to reach 7 million by the end of this year, UNESCAP, UNHABITAT and the Commonwealth Local Government Forum brought together over sixty representatives from the Pacific in Nadi, Fiji, from 30 November – 2 December 2011 to mobilise action on urban issues in the Pacific.

Participants at the Pacific Urban Forum (PUF) lamented the lack of policy action on urbanisation as urban population numbers continue to surge, particularly in the larger Melanesian countries, which are experiencing urban growth at rates twice the national average. The urban populations of Solomon Islands, Vanuatu and Kiribati are likely to double over the next 15-20 years. Excluding Papua New Guinea, close to half the population of the Pacific currently live in urban areas. Despite the high rate of relocation from rural to urban areas and the associated impact on housing, health, education, investment and employment policies, most country representatives noted that urban issues did not feature prominently in national development plans or donor development programmes. Only Fiji, PNG and Samoa have government ministries dedicated to urban development.

Aid effectiveness in Busan and climate change in Durban

Pacific delegates joined the estimated 2,000 people from around the world that converged on Busan, Korea, for the fourth High Level Forum on Aid Effectiveness (HLF4). Previous forums resulted in the Accra Agenda for Action and the Paris Declaration on Aid Effectiveness.

The outcomes document of the latest meeting, the Busan Partnership for Effective Development Cooperation, reflects the shifting geo-political landscape amidst the inclusion of ‘new donors‘ (notably Brazil, India and China), civil society, business, unions and other ‘social actors’ in the new international ‘partnership on ‘development co-operation’ (formerly known as ‘aid’). As with the increasing plethora of international pledges, the real outcome is not the words in a conference document, but the actions that arise from them.

The Pacific Islands Forum Secretariat joined together with the African Union’s New Partnership for Africa’s Development to promote the role of regionalism in enhancing links between country priorities and global efforts for effective development cooperation.

Over the other side of the world, 20,000 (yes, twenty thousand) people are descending on Durban, South Africa for the annual UN climate change conference (COP17).  The first commitment period of the 1997 Kyoto Protocol, the world’s climate change mitigation effort, is set to expire next year. But as we have seen in the high profile negotiations of recent years (in Copenhagen and Cancun)  there is little hope of reaching a new, more ambitious, commitment  to tackle the causes of climate change before the meeting concludes on December 9.

The Pacific island countries have again rallied under the Alliance of Small Island States (AOSIS) banner. The key issue for AOSIS members this year is securing access to climate financing previoulsy promised by developed countries.

The Pacific voice at COP17 continues to highlight climate change as a fight for the survival. Echoing previous calls to broaden the climate debate, the Secretariat of the Pacific Commission (SPC) have urged people to think holistically about climate change.