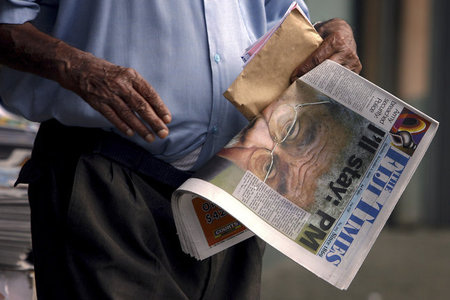 Ironically, as censors leave the newsrooms and Radio Australia is poised to resume broadcasting in Fiji, concerns are mounting about media restrictions in other Pacific countries.

At the same time in PNG, the O’Neill government has come under fire for “monitoring” text messages, emails and comments posted on Facebook. The Sharp Talk group on Facebook has over 4,000 members in PNG, and has become a popular space for engaged Papua New Guineans to exchange views and ideas on contemporary political issues. PNG has always enjoyed a robust free press, and this latest development has been met with great concern for free speech, including a statement from the International Federation of Journalists.

On the subject of media, the recent launch of the Pacific Media Assistance Scheme (PACMAS) could bring greater resources and support for independent media across the region.

Speaking at the recent World Oceans Summit in Singapore, World Bank President, Robert Zoellick, launched a US$1.5 billion global effort to save our oceans. A number of Pacific island countries have been championing the development of the blue economy as a means of protecting and better utilising marine resources.

Meanwhile, Vanuatu’s Prime Minister, Sato Kilman, has taken over responsibility for the country’s telecommunications portfolio. This follows ongoing tensions between the Minister for Infrastructure and Public Utilities and the independent telecommunications regulator. As the near region-wide push for increasing mobile phone coverage continues, we are witnessing significant changes to the legislative and regulatory frameworks. Governments are clearly taking note of the increasing economic and political weight of the rapidly growing sector.

Confusion has surfaced over the timing of the PNG election with claims that 40 per cent of eligible voters are not yet on the electoral roll. PNG’s Deputy Prime Minister, Beldon Namah, flagged the possibility of a 12 month delay, but the Electoral Commissioner has stated that the roll should be completed within two months and the election will proceed in June as planned. Doubts around the legitimacy of the electoral roll in PNG are not new, with previous investigations finding names of dead people and the likes of Elvis Presley and Tom Jones on the roll.

In the meantime, Prime Minster, Peter O’Neill has taken over the finance portfolio from his Finance Minister, Don Polye. It was reported that the decision was based on allegations of misappropriation of landowner funds and budget overruns in the Department of Finance and Treasury.

And, in a move to maximise the benefits of the resource boom, the PNG government has passed legislation to establish an independently managed sovereign wealth fund to manage the revenue from new resource projects.