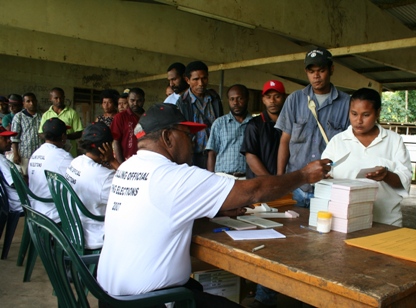 Papua New Guinea Prime Minister Peter O’Neill has defended the 2012 elections, after two separate organisations criticised the process. Transparency International PNG labeled the elections ‘unacceptable’ due to observer reports indicating that at 21% of polling places the election was believed to be either ‘mostly unfair’ or ‘very unfair’. Transparency found that the elections “were seriously flawed to the extent that our democratic traditions are continuing to be seriously compromised” and concluded that “trust in the electoral process [is] declining.” Observers from the Domestic Observation Group concluded in this October report [pdf], that the ‘2012 elections were worse than the 2007 elections both in terms of security as well as fraud and malpractice’.

Commodore Bainimarama has stated he will stick by his men despite their involvement in a leaked YouTube video, showing the vicious beating of two handcuffed detainees. The video has prompted the ire of nation states and numerous international organisations. Avenues for local protests remain severely limited, with all of Fiji’s International Women’s Day marches cancelled, allegedly due to comments made about the video.

The PNG Defence Force (PNGDF) plans to establish clear exit and entry points across two provincial borders in Papua New Guinea that share a common international border with Indonesia. Despite ongoing concerns about illegal border crossings and the safety of PNG nationals at remote sovereign boundaries, the deployment of PNGDF soldiers to the 750km PNG-Indonesia border is being stalled by funding delays in Waigani. Officials in the remote border province of West Sepik allege Indonesian military personnel are erecting flags on PNG territory where official concrete border monuments are no longer visible due to a lack of maintenance by the PNG government.

Following weeks of political turmoil, it appears that Nauruans will head to the polls soon to elect a new government. This announcement follows a series of cabinet shuffles, defections on both sides of the House and an attempted no confidence vote. A dissolution order was blocked by the speaker — then the Supreme Court ruled the speaker did not have the authority to do this. The court ruled that parliament should be convened to consider the president’s advice to dissolve parliament. The Pacific Politics Blog features a complete overview of events.

USAID recently launched a climate change adaptation project to boost the resilience of vulnerable coastal communities in 12 Pacific island countries. Tonga has also taken positive steps to build its resilience by mainstreaming climate resilience into its development planning. In Melanesia, Pacific ministers attending the MSG Environment and Climate Change Ministerial Meeting have been urged to toughen the climate change agenda on the international stage. In his keynote speech at the international conference on the Post-2015 development agenda, Kiribati president Anote Tong stressed the importance of climate change adaptation and mitigation as the primary concern of fragile island states. 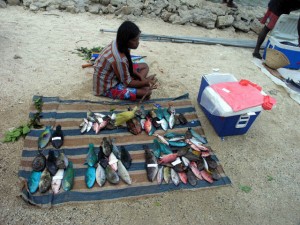 The President of Bougainville, John Momis, has announced new mining laws will be introduced to the local parliament next week, aimed at guaranteeing landowners a significant share in sub-surface resources as well as veto power over any project. Momis says this will mean that resources no longer belong to the state; they will belong to the people. Momis appears to be reassuring the people of Bougainville following concerns raised by former BRA Commander Sam Kaouna that Australia was taking control of mining policy there. Meanwhile, two Australian academics are travelling to Bougainville to investigate illegal mining and how they can assist the Autonomous Bougainville Government (ABG).

Ok Tedi, criticised in the past for a lack of transparency, has just released a slew of recent documents. On its website, one can now find Annual Environmental Reports up to 2012, Annual Reviews up to 2011 and financial results up to 2012. The mining giant has also released a volume of historical statistics which traces the history of the controversial mine back to the 1980s. The figures reveal PNG’s ongoing and heavy dependence on Ok Tedi, which last year was responsible for 27% of PNG’s exports, and 10% of its GDP.

PNG’s ICT regulator, the National Information and Communication Technology Authority (NICTA), has recommended that the Minister for Information and Communications declare Telekom PNG’s fibre optic submarine cable a “wholesale service”. The determination would mean that Telekom PNG must provide other ICT companies access to the cable at non-discriminatory prices. However NICTA did not make [pdf] the same argument for international satellite communications infrastructure, which it argued is not a natural monopoly. The recommendation regarding PNG’s fibre optic cable has been praised as a step towards greater competition and lower prices for internet services in PNG. It comes five months after limits were placed on discriminatory pricing practices used by Digicel to restrict competition in the mobile market.

Although initial reports suggested that the Bank of Hawaii (BOH) wouldn’t shift its March 15th departure deadline, pleas from the Governor of American Samoa, Lolo Matalasi Moliga, have seen the bank agree to delay its departure until June. Despite BOH’s pledges to ensure a smooth transition of its accounts to ANZ, some American Samoans feel that more than one bank is required in the country and are seeking to form a new community bank.

The Director of the Parties to the Nauru Agreement (PNA), Dr Transform Aqorau, has urged Pacific island countries to pursue “value” rather than “volume” in fisheries management, highlighting the opportunities offered by a growing market for “wild caught” tuna stocks. The comments come amid calls for more stringent conservation measures and effective policing of Pacific island fisheries resources. Last week, member nations of the Parties to the Nauru Agreement (PNA) agreed to increase fees charged on fishing vessels in their waters in a bid to sustainably manage their fish stock. In other efforts, the Pacific Islands Private Sector Association (PIPSO) and the Pacific Islands Tuna Industry Association (PITIA) have forged closer ties to promote sustainable fishing in the region.

With backing from the IFC, Timor-Leste has embarked on a hunt for international investors to bankroll, build and operate a new port project at Tibar, just outside the capital Dili, and to fund expansion of the international airport. The projects are expected to provide a boost to both trade and tourism, enabling the movement of more passengers and cargo to and from the country. A two-day conference was held in Dili last week to promote public-private partnerships with the Timor-Leste government, and some 20 international investors attended.

France has questioned the timing of French Polynesia’s bid to be re-listed on the UN decolonisation list.

West Papua leader Benny Wenda has been on a globetrotting tour, bringing the plight of his people to international attention. This week he is in Vanuatu.

Fiji’s Permanent Secretary for Justice Mere Vuniwaqa, who is also the political parties registrar, has resigned.

Tonga is making steps on the clean energy path by investing in solar power units for its outer islands.

The World Bank is helping to light up PNG.

Fiji police are investigating claims that locals met with Taliban members, while researchers are backing reports of recruitment activities in the country.

The Federated States of Micronesia is looking to revitalise its coconut industry by using biofuel.

The Munda airport project in the Solomon Islands appears to be back on track, following the intervention of Prime Minister Lilo in a land dispute that had halted work on the New Zealand-funded project.