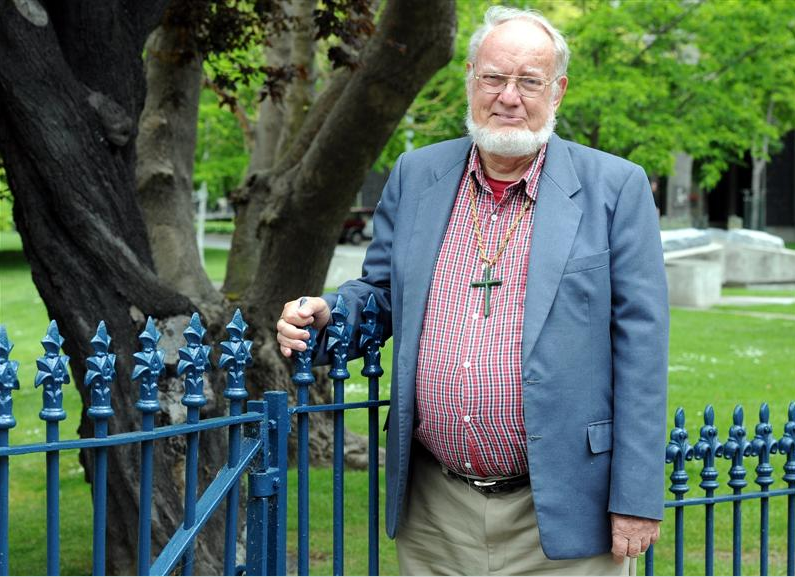 As Solomon Islanders debate the wisdom of Bishop Terry Brown’s unilateral decision to release the long awaited Truth and Reconciliation Commission (TRC) report, Prime Minister Gordon Darcy Lilo is being urged to table the report in parliament. Bishop Brown has told Radio Australia true reconciliation will only come about when Solomon Islanders know the facts surrounding the ethnic tension that erupted in 1997. He added that he hoped his decision to unofficially release the report would push the government to address the commission’s recommendations.

PM Lilo has since accused Brown of acting illegally, while the attorney general has described the action as ‘irresponsible’. Guadalcanal premiere, Stephen Panga, also accused the Bishop of hijacking the process. But the opposition retorted that the PM only has himself to blame for sitting on the report since February 2012. The TRC — modeled after the South African Truth and Reconciliation Commission­ — was established in 2009 by an Act of Parliament at the request of the Solomon Islands Christian Association. The TRC aimed to investigate and document the trauma people experienced between 1997 and 2003.

While capital punishment is in decline throughout the world, Papua New Guinea is investigating the option of bringing back the death penalty as one of the deterrents against increasing levels of violent crime. Prime Minister Peter O’Neill has instructed the Attorney General to bring a stricter raft of laws before parliament in May. The laws will severely punish those found guilty of committing violent crimes, including murder and rape. The proposal includes inexpensive methods of execution together with plans for an isolated high security execution centre.

Social media sites hosting lively debate on the death penalty issue reveal degrees of uncertainty relating to the paradox of acts of violence perpetrated by citizens and those sanctioned by the state. Increased media and community dialogue on the issues surrounding the death penalty include grave concerns about the weak capacity of law enforcement officials to effectively implement laws that some call a ‘knee-jerk reaction’ to the increased prevalence of violent crime against those accused of sorcery. Elsewhere, commentators are suggesting that a broader look at PNG’s social fabric is essential.

Politicians and their close family members are now required to submit exhaustive details of all assets, expenditures, contributions, donations and pledges. Parties are also required to set up offices in each of Fiji’s main administrative areas. The obligations have come under criticism from NFP President Raman Pratap Singh.

Meanwhile, a petition by the Fiji Youth for Democracy movement calling for the reinstatement of the entire Yash Ghai Constitution was accepted but played down by Attorney General Sayed-Khaiyum as just another submission. The Commonwealth joined others in calling for amendments to the draft document as the consultation process wound up on April 30.

Following the visit of a delegation representing the West Papua National Council for Liberation (WPNCL) to Honiara, the push to gain full membership of the Melanesian Spearhead Group (MSG) is gaining momentum with the formal backing of Solomon Islands Prime Minister Gordon Darcy Lilo. PNG is the only country left for the West Papuan National Coalition leaders to visit before the issue is tabled at the upcoming MSG leaders summit in Noumea. Perhaps sensing the building momentum, the Indonesian government has announced that it is considering a ‘Special Autonomy Plus’ plan for the troubled province where further incidents of violence recently emerged following commemorations of the 50th anniversary of Indonesia’s annexation.

Meanwhile, Indonesia’s diplomacy skills have been criticised after the Free Papua Movement (OPM) set up an office in Oxford, with the support of the city’s mayor. In more scandal, an investigation by an Australian journalist has revealed some Papuan children were forcibly removed from their families to attend Islamic schools on Java ­– reminiscent of similar programs that occurred during the occupation of Timor-Leste.

The inaugural Annual South Pacific Defence Ministers Meeting (SPDMM) was held on 1-2 May 2013. The meeting was hosted by the Tongan government but organised mainly by Australia. Participants from Australia, Chile, France and New Zealand, were present along with only two Pacific countries- Papua New Guinea and Tonga. The USA and Britain were invited as observers but China and Japan were left off the guest list.

The SPDMM looked at issues including the growing influence of China in the region, and committed to a Pacific Maritime Security Program to assist Pacific Island states with the management of their Exclusive Economic Zones. Fiji was mentioned only in passing and would be invited to join once a credible election is held. The Joint Communique is available here (pdf).

Meanwhile, Australia released its 2013 defence white paper with a shift in posture from its previous effort in 2009. This paper took a notably more diplomatic approach toward China and suggested that Australian defence priorities would focus more effort on the ‘Indo-Pacific’, with attention given to the South Pacific in relation to maritime security and protection of Australian resource interests in the region. Analysts have argued however, that Australia will need to do more than simply allocate extra resources, if it hopes to improve relations with its South Pacific neighbours.

At an Expert Group Meeting focused on Small Island Developing States (SIDS) and the Post-2015 Development Agenda held at the U.N. Headquarters, Marshall Islands fisheries director Glen Joseph made strong calls for small island nations to avoid being “pushed to one side” in global climate change and sustainable development negotiations. Joseph argued that the terms of the global discussion about sustainable development have to change and SIDS must be at the table influencing this.

Editor of the Marshall Islands Journal, Giff Johnson, recently argued that the Parties to the Nauru Agreement (PNA) is an example of how small island countries have worked together to achieve a better deal from developed nations for their resources. The benefits of developing nations building solidarity, sharing expertise and securing a better deal in the post-2015 development agenda has been explored in detail here (pdf).

Meanwhile, a meeting is underway in Natadola, Fiji, as the G77-plus China, chaired by Voreqe Bainimarama, to explore ways of strengthening South-South cooperation. China, a member of the group, assisted Fiji with its hosting duties, by providing a fleet of 20 vehicles valued at FJD$4 million. 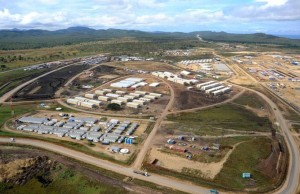 The current threat to the progress of the PNG LNG project continues after a petition by landowners and Hela Provincial Governor Anderson Agiru. Agiru is threatening legal action against the government and project developer Esso Highlands (an Exxon Mobil subsidiary) for alleged non-performance of contractual obligations and non-payment of outstanding benefits for infrastructure projects. But PM Peter O’Neill is questioning the governor’s move — suggesting that his government has disbursed the approved benefits according to the agreed conditions. Esso Highlands boss Peter Graham is insisting on open dialogue with the leaders.

Governor Agiru is questioning the impact of the PNG government’s recently announced State Owned Enterprise reform agenda. He warned other provincial partners in the gas project of the future expense and financial risks they could face under the restructure of SOEs approved in March 2013. Governor Agiru is encouraging other provincial governments to withdraw their stake in shares within the multi-billion dollar gas project or risk losing millions in future. He fears the consolidation of assets under the approved national restructure will dilute the equity shares of individual provincial partners in PNG LNG.

The PNG LNG project is central to the country’s future economic growth potential. If the $15 billion project goes ahead, it alone is set to double the country’s GDP. Royalties and equity payments, infrastructure and seed capital for landowners’ businesses are included in the benefit sharing arrangements agreed to in 2009. Historically, threats of disruption to the gas pipeline project by landowners have involved grievances over the outstanding employment and compensation benefits under the 2009 Kokopo Agreement.

A bigger focus is being directed towards the Pacific for raw materials, especially by emerging economies from Asia, to fuel their growth. The next Asian country after China, South Korea and Japan, to show such interest is Thailand, with Prime Minister Yingluck Shinawatra visiting Papua New Guinea in March. As a follow-up, Thailand’s Ambassador to Vanuatu, Papua New Guinea, Solomon Islands and Fiji, Maris Sangiampongsa, has stated her country wants to build business links and trade pacts with the Pacific. Fish and gas have been identified as the most likely resources to be tapped into in return for technical assistance to help Pacific countries develop their own industries. PNG PM Peter O’Neill promised his Thai counterpart to grant petroleum licenses to Thailand’s PTT Exploration and Production.

Lower commodity prices are likely to produce a larger budget deficit than forecast in PNG. The 2013 PNG Budget commits the government to higher levels of spending, with the objective of offsetting the effects on the economy of the completion of the LNG project. This higher spending is forecast to produce a deficit of 7.2 percent of GDP. An analysis of the assumptions contained in budget documents suggests the actual deficit may be higher than this (chapter 2 of this budget document [pdf]). Commodity prices remain lower than forecast in the budget papers. Gold is currently US$1466 instead of the US$1701 per ounce assumed in the budget projections. Copper is currently US$7270 instead of the US$8047 per ton assumed in the budget projections. Oil prices are also lower than forecast.

Lower commodity prices will reduce government revenue from taxation of mining and energy commodities, and are likely to result in a larger budget deficit than projected. So too are other questionable assumptions in the budget, such as zero growth of the public service wage bill until 2017. The high budget deficit suggests that there is need for caution in future spending growth – a point made by two ADB economists last week.

Pacific media are moving to establish a regional Ombudsman.

Tonga is seeking public debate over its proposed Freedom of Information law.

Documents show the British plan to evacuate people from Kiribati and Tuvalu in the last years of colonial administration.

The United Nations Development Program has pledged millions to promote democracy in Tonga.

Veteran politician Gaston Flosse has been returned to power in French Polynesia.

FSM has released annual reports for the Compact Trust Fund.