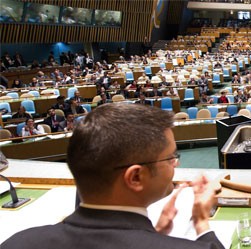 Condolences on the passing of Chronox Manek, Chief Ombudsman of Papua New Guinea.

In speeches to the General Assembly, Pacific island leaders were critical of the international community, imploring richer countries to do more to address climate change issues and increase assistance to Pacific island countries. New Zealand foreign minister Murray McCully echoed calls for greater support to the region, particularly in relation to the management of fishing resources and development of renewable energy.

On the sidelines of the general assembly Fiji effected a significant diplomatic coup with its election as chair of the influential Group of 77, the first time a Pacific island nation has been elected to that position.

In what has been seen as a setback in Fiji’s political rehabilitation, an International Labour Organization mission was expelled by the military government apparently without reason. The expulsion was unexpected, not least because the mission was in Fiji at the invitation of the military government to investigate claims by local trade unions that workers’ rights were not being respected. The Attorney-General Aiyaz Sayed-Khayum denied an ‘ejection’, stating that the delegation had been asked to leave ahead of a future mission to operate under revised terms of reference.

In the aftermath of this incident a prominent Fiji unionist labelled as ‘harassment’ police having prevented him from boarding a flight to China.

For the first time in years PNG, it would seem, is prepared to engage with Indonesia over decades of alleged human rights ‘abuses’ in neighbouring West Papua. PM Peter O’Neill’s position stands in contrast to one of West Papua’s traditional supporters, Vanuatu, in light of PM Kilman’s recent statement at the UN General Assembly which failed to mention West Papua.

Elsewhere, questions have arisen as to whether West Papua will be Australia’s new East Timor. In addition, New Zealand’s public pension fund has pulled out of Freeport’s Grasberg mine in West Papua due to breaches of human rights by Indonesian security forces. This is the first time a government fund has acted on corruption and human rights violations by Indonesia’s security forces.

In Vanuatu, the rivalry between the paramilitary force and their police counterparts resurfaced over the weekend with the outgoing Police Commissioner, Joshua Bong, instigating an arrest warrant for three senior officers including his deputy. All three men are bailed but face mutiny and incitement to mutiny charges. The action came on the day the Commissioner’s term was to have ended but local media reported Bong being given a further five-year term. The new development raises security concerns for a country preparing to go to the polls at the end of the month, although Bong gave reassurances and appealed for calm.

Defence ties between the US and New Zealand have been upgraded, following the signing of the Washington Declaration and recent visit to NZ by the US Defence Secretary Leon Panetta. Relations have been gradually improving after decades in the deep freeze, following the Lange government’s decision in the 1980s to ban any nuclear-powered US warships from making port calls.

This recent engagement is about leveraging New Zealand’s good standing in the Pacific to help counter the rising influence of China, Russia and others.

Although Australia continues it close military co-operation with the US, some analysts worry that there is a gap between Australian political rhetoric and a declining defence budget that may create confusion in the US.

Less ambiguous is China’s continuing engagement with Pacific nations such as Fiji, with a high profile visit to Suva by China’s second-ranked leader Wu Bangguo. Wu provided vocal support for Fiji’s regime and in unusually undiplomatic language, criticised Australia and New Zealand for isolating Fiji and interfering in its affairs.

China has provided PNG with up to US$5 billion in credit to upgrade the Highlands Highway and improve other key pieces of infrastructure. Supporters of the loan, including Prime Minister O’Neill, say that it will foster economic growth. In addition the Asian Development Bank has said that improving infrastructure will result in increased benefits from the mining boom. Opponents to the loan, however, contend that repayments will be delayed and borrowing in the midst of slowing commodity prices and a high budget deficit is irresponsible.

PNG’s status as a ‘tiger economy‘ has been questioned, as economic growth rates have failed to generate corresponding improvements in living standards.

Prime Minister O’Neill has called for visa restrictions for PNG nationals travelling to Australia to be relaxed to improve the ease of doing business between the two nations.

Finance minister, Rick Hou presented an economic overview as part of the ‘Pacific Update’ held recently in Canberra. Mr Hou also examined some of the challenges related to the political economy of Solomon Islands. This came ahead of his presentation of the supplementary budget to Parliament at which time he advised that 2012 revenue was expected to be SBD 140 million less than originally predicted. Meanwhile, the Asian Development Bank has approved a grant/loan package of SBD 133 million to the government in order to acquire an undersea cable as part of the Solomon Islands Broadband for Development Project.

A new report commissioned by the Climate Vulnerability Forum, a group of countries including Kiribati, Timor-Leste, Tuvalu and Vanuatu, has found that the annual economic cost of climate change has already reached one per cent of global GDP. By 2030, the economic costs are expected to reach to 3.2 per cent of global GDP and the cost of sea level rise to low-lying small island states such as Kiribati may reach 20 per cent of GDP.

Eighty-three families from the Carterets Islands are to be relocated to Bougainville, while Timor-Leste has made a tentative offer to relocate climate change refugees from Kiribati.

The Cook Islands’ Secretary of Marine Resources has rejected the findings of a report by the non-governmental organisation Oceania suggesting that Cook Islands is the nation most vulnerable to food security threats resulting from ocean acidification.