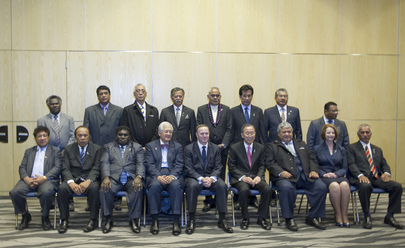 Too much talk, not enough action at Leaders Forum

This year marked the 40th anniversary of the Pacific Islands Forum and the annual leaders’ summit, this time held in Auckland. Once again the gathering was described by some island observers as little more than fruitless deliberations. Kiribati President Anote Tong suggested that island countries needed to take ownership of the flagging regional entity. The Forum Communique summarises the discussions held on topics such as sustainable economic development, fisheries, transport, education, tourism, trade and climate change.

UN Secretary General Ban Ki-Moon inadvertently created the biggest story around the Forum by declaring that the UN remained concerned about human rights abuse in West Papua and was open to putting the province back on the UN decolonisation list.

Also in Auckland, the Lowy Institute released its controversial and much criticized Fiji Poll 2011, which found popular support for the military regime.

After meeting privately in Auckland during the Pacific Islands Forum, leaders of five Polynesian countries (Samoa, Niue, Cook Islands, Tuvalu and Tonga) will meet in Apia, Samoa, in early November to establish a Polynesian Leaders’ Group. Samoan Prime Minister, Tuilaepa Sa’ilele Malielegaoi, will host the inaugural meeting and chair the new regional entity. Consideration is being given to inviting New Zealand to be a part of the group.

In continuing signs of subregional strengthening, the Melanesian Spearhead Group received a notable injection of support from the government of Timor Leste during a recent visit to the secretariat in Port Vila by Prime Minister Xanana Gusmão. The Melanesian Spearhead Group also welcomed newly appointed Director General, Peter Forau of the Solomon Islands replacing Rima Ravusiro of Papua New Guinea.

Micronesian leaders have also been preparing to establish a secretariat to formalise their annual Micronesian Chief Executives’ Summit.

While this tendency to stronger sub-regional and interest groupings alarms some observers, a more sensible view might be that is promotes more effective regional discussions, and need not be a threat to regionalism.

PNG government called on to weed out corruption

As Papua New Guinea’s ousted government continues a boycott of parliament, much hope has been put in the new PNG prime minister tackling the problem of systematic corruption within the government. While a former planning minister reportedly fled to Australia, media, bloggers and social networks have been calling on Prime Minister Peter O’Neill to protect whistleblowers and reinstate Dr Rhona Nadile who was sacked from the Department of Labour.

In what could be a boost for transparency and citizen scrutiny, social networking is booming in PNG with Facebook users increasing by 44% over the last three months. Among the now 55,660 users is the O’Neill Namah Government. Sam Roggeveen interviewed PNG blogger Emmanuel Narokobi about the explosive growth of new media for the Lowy Interpreter blog this month. The Australian Embassy in PNG has also come under fire recently online with more than 1600 PNG Facebook users alleging discrimination and poor service in relation to visas. The issue has also been followed up by local blogs.

Meanwhile, the PNG new government’s reform agenda, articulated on Independence Day by PM O’Niell, and summarized in this blog by Matt Morris, is gathering pace with a supplementary budget focused on promoting school education, and the controversial proposed merger of Air Niuguini and Airlines PNG.

And former leader, Sir Rabbie Namiliu, visited Australia to deliver the first PNG Independendence Day Oration at Canberra’s Parliament House. He also delivered a lecture to a sell-out crowd at ANU with the theme that it was time to re-align the Australia-PNG relationship away from aid to economic cooperation.

After announcing its 30 year plan, Auckland City Mayor Len Brown says New Zealand’s largest city plans to stay the biggest Pacific City in the world. Over the next 30 years, it is estimated that about a million people will shift to Auckland, and many will be from the Pacific islands.

Auckland is also planning on strengthening ties with Pacific nations on trade and culture. In a show of city diplomacy, Mayor Brown is planning on sending an official trade, cultural and political delegation to formalise Auckland’s relationship with the Polynesian nations Samoa, Tonga, Cook Islands and Niue.

Environment and Peace Days in the Pacific

Pacific island countries joined together on 24 September for the global Moving Planet event.   The day of action called on world leaders to break the dependence on fossil fuel energy as a means of solving the climate crisis. In the lead up to next year’s Rio + 20 conference on sustainable development, Pacific Small Island Developing States have stated that in their context a green economy has a strong ‘blue’ component – highlighting the importance of ocean governance and fisheries issues.

In his International Day of Peace message, UN Secretary General Ban Ki Moon emphasised the need for people to make their voice heard on peace and democracy. The call was heard in the Solomon Islands where a Peace Stakeholders Dialogue brought together a range of stakeholders that resulted in a draft Partnership Framework for Cooperation and Coordination to tackle the ongoing issue of peace building. Elsewhere in the Pacific, Peace Day was marked by activities by UNDP interns and USP students, FemLINK and the Citizens’ Constitutional Forum in Fiji.

•   Cook Islands opposition have called for a review of immigration policy as poor working conditions and lack of rights increase for foreign workers.

•   Pacific Island countries will map coastal hazards. A recent UN report notes that 3 out of 5 of the world’s most vulnerable countries to natural disasters are in the Pacific.

•   The Republic of Korea has renewed its Cooperation Fund to support the prevention and treatment of non-communicable diseases (NCDs) after an alarming 75 percent of all adult deaths in the Pacific were identified as being caused by NCDs.

•   The Gillard Government has yet to decide the fate of Australia Network, an important regional broadcast service.

•   The Australian Council for International Development (ACFID) is part of a push to see more representation of women in Pacific parliaments.