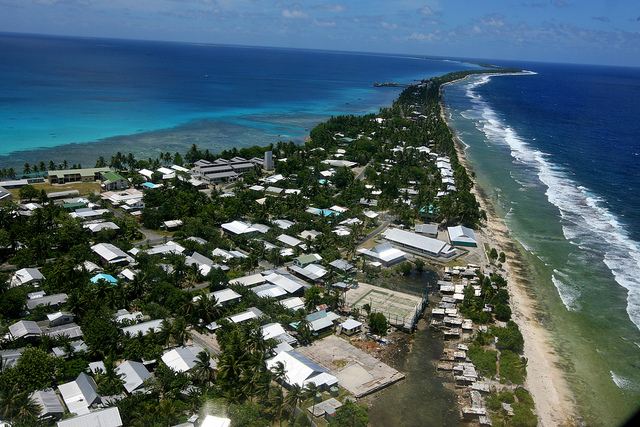 At the upcoming meeting of the Pacific Islands Forum in Port Moresby on 7–11 September, the Pacific leaders will be asked to consider a unified Forum position on climate change to take to the UN Climate Change summit in Paris in November. At stake in their deliberations is not only the strength of the ‘Pacific voice’ on climate change in the lead-up to the Paris conference, but also the future relevance of the Pacific Islands Forum as the preeminent diplomatic arena for representing matters that are of utmost importance to Pacific island states.

The leaders’ deliberations on this issue will be made against the backdrop of a region-wide determination to put forward a strong and unified position at the Paris conference in support of policies that will ensure the survival of low-lying Pacific island states. While there are several key positions that Pacific states have endorsed in relation to the effects of climate change – for example, in relation to liability for damage, and environmental refugees – the key shared commitment relates to mitigation: the need for emission targets that will reduce the rate of global warming sufficient to ensure the survival of the Pacific island states.

The threshold they have all endorsed on the basis of IPCC analysis [pdf] is keeping warming less than 1.5 degrees Celsius over pre-industrial levels [pdf]. In recent months this policy commitment has featured in efforts, in various regional arenas, to produce a shared Pacific position as a way of signalling to other regional groupings in the lead-up to the Paris conference. (Africa, for example, has also produced a regional declaration supporting emission targets that result in global warming of no greater than 1.5 degrees).

In June, the Oceania 21 Leaders Summit, representing 22 Pacific island states and territories issued the Lifou Declaration [pdf], which calls for ‘an international revolution in the way the world deals with climate change at COP 21’. In June the the Pacific Islands Climate Action Network (PICAN), a coalition of regional NGOs, agreed on a draft Moresby Declaration, which included the 1.5 degree threshold. This was submitted to the new Pacific Framework process of the Pacific Islands Forum and was successfully chosen as one of the five issues to be taken forward to the Moresby Forum (although it is not clear whether the final draft text to be put before Pacific leaders in Moresby will retain the 1.5 degree commitment of the original, or whether it will be dropped to suit the interests of Australia and New Zealand). In July, the Polynesian Leaders Group, meeting in Papeete and representing ten states and territories, issued the Taputapuatea Declaration on Climate Change [pdf]. This declaration specifically mentioned 1.5 degrees as the shared position of all members of the Leaders Group.

Most important of all, the Pacific Islands Development Forum, in its meeting in Suva on 2–4 September, has opened for signature a Suva Declaration on Climate Change. This declaration, championed by the Fiji Government, will also reflect the Pacific leaders’ commitment to achieving global warming of less than 1.5 degrees.

The Pacific resolve to announce a strong position in the lead-up to the Paris conference suggests that the Pacific leaders are not in any mood to accept a move by Australia and New Zealand to water down this commitment at the Moresby Forum. In past Forums, Australia and New Zealand have vetoed the adoption of the preferred joint position of the Pacific island states by arguing that they could only sign on to communiqués consistent with their own more conservative policies.

The recently declared policy of the Australian Government for emission targets of 26–28 per cent below 2005 levels by 2030 clearly does not amount to a commitment to keep global warming under 1.5 degrees, where it needs to be if atoll countries are to survive. In fact the 26–28 per cent target is well below the 40–60 per cent target recommended by the Australian Climate Change Authority as necessary to keep warming below 2 degrees. For Tony de Brum, Foreign Minister of the Marshall Islands, ‘Australia’s weak target is another serious blow to its international reputation’. He has argued that ‘If the rest of the world followed Australia’s lead, the Great Barrier Reef would disappear. So would my country, and the other vulnerable atoll nations on Australia’s doorstep.’

The Pacific leaders have also been angered by the Abbott Government’s efforts to actively work against a global effort to curb global warming. Of particular concern to Pacific leaders in the last two years has been Australia’s failure to turn up to global climate change summits, the attempt to form an Abbott-Harper alliance to work against climate action, the cancellation of the Australian carbon emissions trading scheme, the attack on alternative energy schemes within Australia, the attempt to dismantle the Australian Climate Commission, and the statement by the Government’s chief business adviser that climate change change was a United Nations ‘hoax’. The last straw was Prime Minister Abbott’s announcement of coal as ‘good for humanity’, and his commitment to opening new coal mines just as the Kiribati government called for a global ban on new coal mines.

What then are the possible outcomes in Moresby? On past practice we would expect Australia and New Zealand (which has announced similar emissions targets to Australia) to refuse to sign on to the Pacific’s preferred position, and to hold the declaration hostage to their own interests. This was, for example, the strategy at the Cairns Forum in 2009 and the Majuro Forum in 2013. If this strategy succeeds again in Moresby, this will be a Pyrrhic victory for Canberra and Wellington. This will be seen as a win on the day in Canberra, but it will in fact prove the point that Fiji has been trying to make: that a Pacific Islands Forum with Australia and New Zealand as members is hampering the ability of the Pacific island states to defend their interests, and in the case of climate policy, their very survival.

A second possibility is that the Pacific island states decide that they would rather forego the joint Forum declaration on Pacific climate policy rather than surrendering their core commitments, which they had already endorsed in other diplomatic arenas. By default or design this would mean that they would rely on the PIDF’s Suva Declaration on Climate Change to represent their interests in the lead-up to Paris. Like the first possibility, this de-legitimates the Pacific Islands Forum as the pre-eminent regional organisation at a time when it is trying to justify its position in relation to the Fiji-backed PIDF. It will further call into question the relevance of the Pacific Islands Forum in defending the interests of Pacific island states.

A third option would be for the Forum Chair (Papua New Guinea) to recognise a Forum consensus (14 Pacific island states) for a strong Moresby Declaration with a commitment to a 1.5 degree threshold, based on the support of all Pacific island leaders in the meeting. The Chair could then call for the opening of the declaration for signature. All Pacific island states would sign, and Australia and New Zealand would not sign. A Moresby Declaration, consistent with the Suva Declaration, could then be put forward as the position of the Pacific Islands Forum. There is a precedent for this approach in the opening for the signing of the Australian-sponsored South Pacific Nuclear-free Zone Treaty, on the basis of a ‘consensus’, at the Rarotonga Forum in 1985 despite the opposition of Vanuatu and Tonga (and in the event they did not sign the treaty).

While this would be difficult for Australia and New Zealand to swallow, it would be a better path for all concerned. It would allow the heartfelt position of the Pacific island states to emerge as a Moresby Declaration on Climate Change consistent with the Suva Declaration on Climate Change. This may also provide a procedural way forward for other issues where Pacific island joint policy positions are held hostage to the interests of Australia and New Zealand. This may in turn help to restore the legitimacy of the Forum by reclaiming its original purpose [pdf] as the vehicle for the protection of Pacific island interests in global diplomacy.