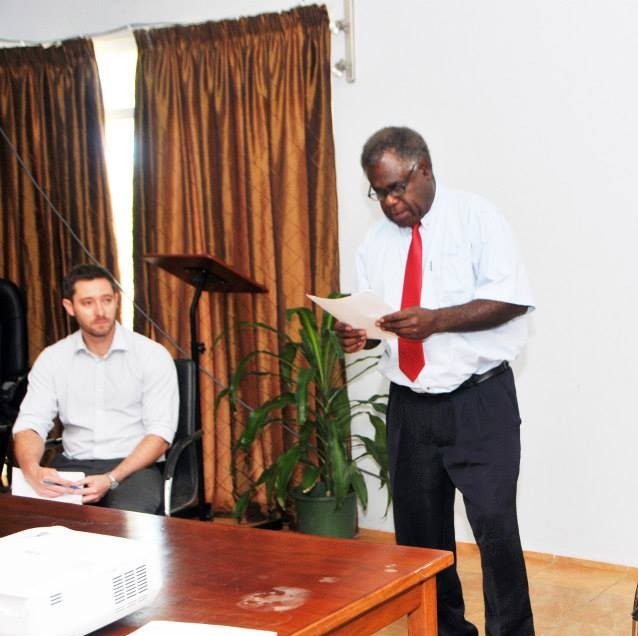 Matthew Dornan gave the keynote presentation, which was based on his research of infrastructure service delivery and maintenance challenges across the Pacific. It was an opportunity to discuss these issues with an audience of policy-makers responsible for infrastructure services in Vanuatu and other stakeholders from various sectors.

Drawing on a recent report for the Pacific Region Infrastructure Facility, of which he was the lead author, Matthew highlighted the following points:

The presentation was followed by a discussion involving policy-makers, private sector stakeholders and development partners.

The Director General of the Ministry of Infrastructure and Public Utilities, Mr Johnson Binarau, acknowledged that in the past the priority for Vanuatu’s government budgeting and expenditure had been building infrastructure, to the detriment of maintenance. He argued that this is gradually being addressed, thanks in part to the Millennium Challenge Account road project, with the government committing 500 million vatu in this year’s budget to road maintenance. The Director General also confirmed that some of the challenges Matthew had identified were applicable in the Vanuatu context.

The importance of routine maintenance as a way of reducing the high costs associated with infrastructure rehabilitation was a point that resonated strongly with the session’s participants. This was particularly the case for roads. The discussion prompted some participants to ask ‘do we have too many roads?’, and whether there was a means of calculating how many new kilometres of roads can be built, whilst remaining within Vanuatu’s current capacity to undertake adequate maintenance.

Also discussed were problems arising from the unclear division of responsibilities for infrastructure management, including maintenance. This is a common issue between different levels of government (e.g. national/provincial), and ministries. Often, responsibility for infrastructure is given to sub-national government entities, such as municipal councils, without adequate transfers of resources for their maintenance. Conflicts between state and federal governments in Australia demonstrate that such problems are not confined to the Pacific.

There is much to be done to address such challenges. Governments need to ensure that responsibilities for infrastructure management are clearly defined, that there is effective and efficient coordination between different stakeholders, and that adequate resources are available. In this, as in other areas, a ‘technical’ response is unlikely to be enough. Better asset management systems and processes are needed. But without sufficient funding and attention from political leaders, these measures will not be sufficient to address maintenance challenges. Matthew argued that improved planning and budgeting is one thing that line areas can do to help generate support for increased funding for maintenance, both among leaders and finance ministries.

The impacts of climate change and increasing populations, particularly in urban areas, were also raised in the discussion. Although Matthew’s research had not dealt directly with these issues, he acknowledged that there was indeed a real need to take these items into account in terms of designing, building and maintaining infrastructure assets in the Pacific, as elsewhere.

When discussing roads, one participant raised the potential for a ‘user pays’ model to provide additional revenue to support maintenance work. Matthew argued that a ‘toll’ system is unlikely to work in most Pacific island countries, but that an alternative is to establish a road fund based on a fuel levy or vehicle registration. However, he cautioned that these efforts too were likely to face considerable political challenges, as shown by PNG’s experience with the National Road Authority. The Director General of Infrastructure and Public Utilities advised that this is an area his ministry is currently exploring.

The opportunity to consider and discuss these issues comes at a very timely juncture for Vanuatu, as there are several major infrastructure projects underway or due to commence in the near future. These include rehabilitation of roads, improvements to drainage and sewage disposal in Port Vila, refurbishment of Port Vila Central Hospital, construction of a National Convention Centre, refurbishment of Malapoa College, and construction of a new wharf.

The discussion highlighted how important it is to plan for meeting the cost of maintaining this infrastructure. There are lessons to be learned from other countries in the region about how to manage infrastructure. The seminar provided a useful focal point around which interested parties from numerous sectors could meet, share information and form connections to support future work in this area.

You can see photos from this event here.

“Devpacific Dialogues” are events designed to create intellectually stimulating spaces where colleagues from all sectors can meet to share knowledge and form connections to support development in Vanuatu and elsewhere in the Pacific island region. For more information, please contact tess@devpacific.org.