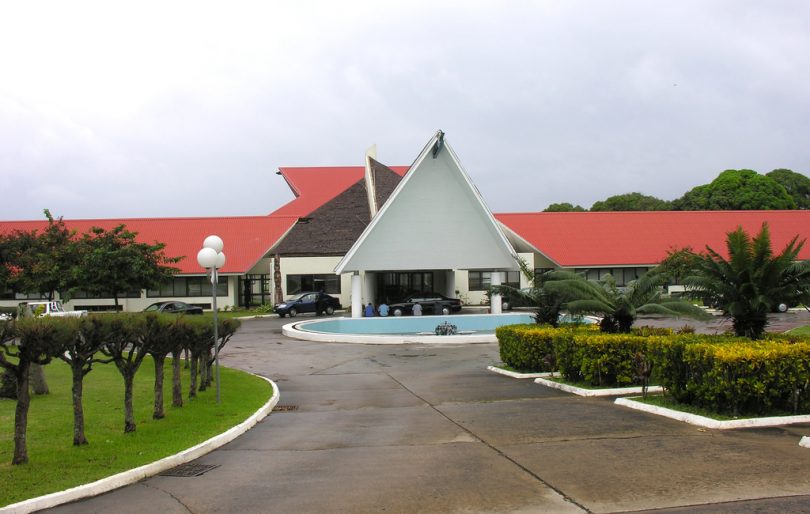 During a recent trip to Port Vila, Tess Newton Cain caught up with Hon Ralph Regenvanu, Minister for Foreign Affairs, International Cooperation and External Trade in the Vanuatu Government. Listen to a podcast of their conversation here, or read a transcript here. For the highlights of their discussion, read on…

Minister Regenvanu describes himself as a Port Vila citizen. He has lived for most of his life in the capital of Vanuatu, other than for a period of time when he was studying in Australia (he holds an Honors Degree in Anthropology and Development Studies from ANU).

He spent more than a decade as Director of the Vanuatu Cultural Centre, prior to a return to university in 2007, this time to study Law at the University of the South Pacific. Then his political career took off:

Halfway through my degree, I stood for election, and I got in at the end of 2008 as an independent candidate. And myself and the others who were with me in the political journey set up the Graon mo Jastis Pati in 2010.

This is Minister Regenvanu’s third term in Parliament and he has held a number of portfolios since 2008. He took over as Minister for Foreign Affairs in December 2017.

So, what are Vanuatu’s foreign policy priorities and what would he like to see his ministry achieve during his tenure as its leader? Significantly, the Minister points to internal matters as being more significant than external issues:

The biggest issues of this ministry are not so much external issues. The biggest issues of the Ministry of Foreign Affairs are the internal coordination of the government so that we can strategically approach our international relations and diplomacy. So, at the moment, it is quite difficult to effectively strategise about how Vanuatu places itself in the world, especially the most important thing for us on the horizon is the LDC graduation in 2020.

The minister explained that he thinks there are more opportunities for Vanuatu to work strategically bilaterally, regionally and globally. This is what will be required as the impacts of Least Developed Country (LDC) graduation take effect after 2020. Therefore, he is focused on getting the internal infrastructure right between his Ministry, the Prime Minister’s Office (which is responsible for aid coordination), the Ministry of Finance and Economic Management, and the Ministry of Agriculture, Livestock, Forestry, Fisheries and Biosecurity (which has carriage of the EDF11 program).

Politics in Vanuatu and voter behaviour tends to focus on the hyper-local issues so how can the work of the Foreign Minister and his Ministry be translated into messages that resonate with the urban voters of Port Vila, which is where Minister Regenvanu’s constituency sits?

…the best way to really make people appreciate our foreign relations is, of course, all the aid projects, right? And being able to show that they are well chosen, have high impact on the lives of people, that they’re conducted in a manner which is transparent, and they’re done efficiently. And that brings me back to what I originally said about being very strategic in how we organise ourselves internally to get projects, attract the right kind of projects and the right kind of conditions that we want.

The second aspect of foreign affairs that the Minister believes resonates with voters is one that is essentially part of the DNA of Vanuatu:

There is, of course, the very popular issue in Vanuatu of West Papua, and that’s also something which governments need to take heed of, in terms of the very, very popular support for the independence of West Papua in Vanuatu, which is translated into one of our foreign affairs objectives.

A third, emerging, narrative is around the growing awareness of the impacts of climate change in Vanuatu. On that note, we discussed recent statements the minister had made regarding climate finance and, in particular, the issue of compensation for loss and damage.

He expressed a certain amount of frustration with the actions (or lack thereof) of developed countries in relation to some key issues:

You’ve got to play the game that you yourself agreed to. So, when it comes to the Green Climate Fund, for example,… it’s a very poor effort by the developed countries who’ve said that they would contribute. Let alone, talking about loss and damage, which has absolutely no contributions, even though that was also an agreement made by all the countries…

I think the Pacific Islands Forum is definitely useful, especially in terms of articulating common positions and being a conduit for development finance, accessing larger facilities and so on… I can’t say the same about the MSG [Melanesian Spearhead Group]. I think the MSG is… it’s disappointing, to say the least and there’s a question of its relevance.

The Minister accepts that Vanuatu has a particular interest in the MSG, but says that ongoing support depends on management decisions made in the next little while. Whilst the decision on the membership application of the United Liberation Movement for West Papua is top of that list, there are other concerns around management of the organisation as well. As for the PIDF?

We’re currently not a member. And we’re just — I suppose we’re just watching it to see — we’re really more invested in the Forum at this stage.

Last, but not least, we turned to the issue of increased participation of women in political decision-making. This is an issue on which Minister Regenvanu has long been very vocal. Further to his contribution to getting temporary special measures included in municipal elections in Port Vila and Luganville, what is next in this space?

…the next step is going for political party legislation, which is what we’re working on now, to get a new bill through Parliament, which provides for the regulation of political parties. At the moment, we have nothing like that in Vanuatu. So, just a very simple law that says you have to register a political party according to certain criteria… And then in that legislation, I think, is room to create measures… by which women can get more representation.

Minister Regenvanu continues to be a prominent and influential member of the Vanuatu Parliament and Government. We will be watching his political progress with interest.