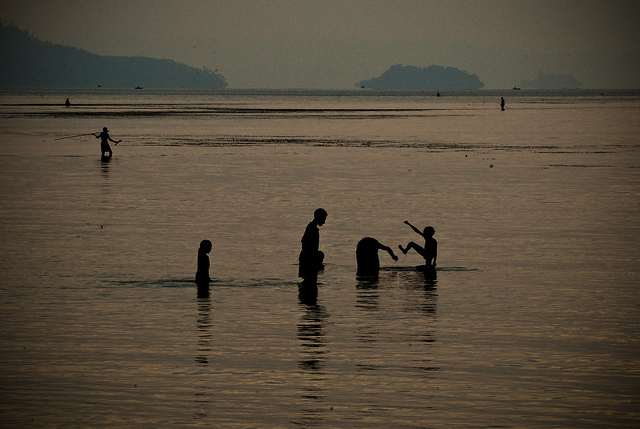 Although it is not large by global standards, Papua New Guinea’s provision of aid to other Pacific island countries has become a significant part of its regional diplomacy. This post draws on available open sources to provide a necessarily preliminary outline of Papua New Guinea’s aid program in the region.

The origin of Papua New Guinea’s aid program can be traced back to an announcement by former prime minister Bill Skate in 1997 of a grant scheme to assist Solomon Islands. This pledge was made in the aftermath of the Sandline affair and was characterised at the time as a form of compensation for the spillover effects on Solomon Islands of the Bougainville crisis. Reports vary as to the size (somewhere in the range of K20–40 million) and the period of the commitment, and indeed it’s difficult to trace the extent to which the commitment was ever fulfilled. According to Fraenkel (2011) [pdf], assistance from Papua New Guinea was halted as a result of the fiscal crisis faced by the incoming Morauta government in 1999. Skate’s 1997 pledge seems to be linked to the provision of scholarships for Solomon Islanders to study at tertiary institutions in Papua New Guinea, something that’s since become a staple of the relationship although, again, it’s difficult to pin down when this program commenced. Papua New Guinea’s ambitions continued to develop under Michael Somare’s prime ministership between 2002 and 2011: in 2006, for instance, foreign minister Rabbie Namaliu pledged K20 million to Solomon Islands at a Melanesian Spearhead Group meeting held in Honiara following the April 2006 riots sparked by the election of Snyder Rini as prime minister, which resulted in serious destruction of, and damage to, property in Honiara’s Chinatown and nearby areas.

Papua New Guinea’s funding for Solomon Islands, and for other Pacific island neighbours, was turbocharged following the election of Peter O’Neill as prime minister. In October 2011, a joint communique between O’Neill and Solomon Islands prime minister Danny Phillip announced a pledge to give Solomon Islands K100 million over five years ‘to support its internal development programmes’. Part of this was earmarked to support the abovementioned scholarship program. Although announced in 2011, budget documents suggest that the initial K20 million tranche was not delivered until 2013. Solomon Islands budget papers record funding from Papua New Guinea being allocated to a range of ministries in 2013 (health, education, infrastructure, rural development and development planning). A further payment was made in 2014, which seems to have been largely earmarked for disaster relief following serious flooding in Honiara in March that year.

Elsewhere in the region, Papua New Guinea built up a steady, if sporadic, record of support for other Pacific islands during the Somare years and beyond. For instance, it provided disaster relief for both Fiji (2008) and Samoa (2012).

2013 saw a high watermark for Papua New Guinea’s aid program. In April of that year, Prime Minister O’Neill announced a K50 million contribution towards the holding of Fiji’s first elections since the 2006 coup. And in September 2013 he announced the establishment of a ‘substantial aid program to the Pacific’. As part of this, pledges were made to Marshall Islands (support for hosting the Pacific Islands Forum), Tuvalu (climate change assistance) and Tonga (disaster relief), on top of the existing pledges to Solomon Islands and Fiji. O’Neill’s announcement was reflected in a K55 million allocation to the Papua New Guinea Department of Foreign Affairs and Trade in the 2014 budget, brought down in November 2013.

An assertion of regional leadership

Although it hasn’t been articulated in these terms, Papua New Guinea’s aid program displays characteristics of south–south cooperation: an emphasis on ‘solidarity’ and a resistance to the idea of conditionality on the part of the donor and, seemingly, to the idea of accountability on the part of the recipient. The aid budget appears to be disbursed largely as grants in the form of budget support.

Even so, Prime Minister O’Neill seems committed to a regional aid program. In March 2015 he pledged K5 million for cyclone relief in Vanuatu, and K1 million for Tuvalu. In May 2015, he reiterated the K100 million pledge to Solomon Islands and undertook to present the next K20 million tranche at the Melanesian Spearhead Group summit in Honiara in June 2015. In the same month, he pledged USD3.7 million for the creation of a Smaller Island States office in Palau. Also in May 2015, at a speech in Sydney, he spoke of a K300 million commitment to the region over five years, which is broadly consistent with his 2013 announcement.

Tracking Papua New Guinea’s aid program presents a range of hurdles. Budget documentation has improved in transparency in recent years, but the data are patchy and still give only a partial sense of the overall picture. There’s a poor line of sight between public announcements and delivery. Transfers seem to be made on a fairly ad hoc and irregular basis and there seems to be little, if any, reporting on Papua New Guinea’s aid expenditure. Nor, it seems, is there yet much of a demand for this from the public in Papua New Guinea.

It’s unclear how the ‘regional development assistance program’ will be affected by Papua New Guinea’s developing fiscal crunch. But Prime Minister O’Neill’s recent comments underline that Papua New Guinea’s aid is now a significant feature of its regional diplomacy, and part of its self-perception as a regional leader.

This brief survey also points to areas for further research, including how Papua New Guinea’s aid program is managed within its public service, how it is viewed by Papua New Guineans themselves, and what other Pacific island countries are doing in this area.

James Batley is a distinguished policy fellow at the State, Society & Governance in Melanesia (SSGM) Program at the ANU. This article was originally published as an SSGM In Brief.