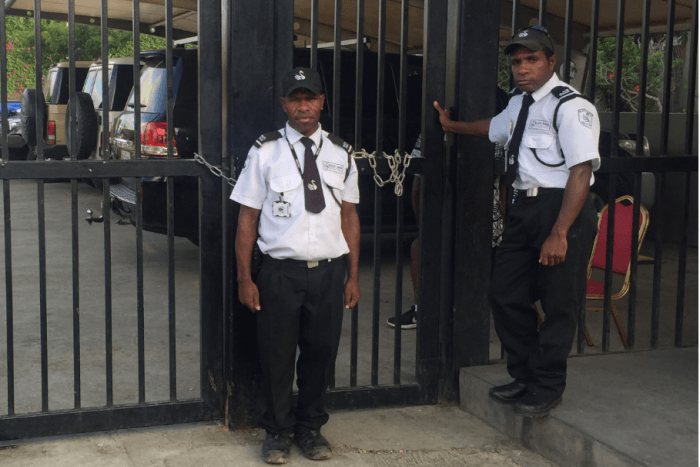 In a surprise move, Papua New Guinea’s (PNG) new Prime Minister, James Marape, has appointed member for Madang Open Bryan Kramer, as the country’s police minister. Soon after his appointment Kramer promised to reform PNG’s police force, the Royal Papua New Guinea Constabulary (RPNGC). The one-time member of the opposition and critic of the O’Neill government, has outlined a range of measures, including providing more opportunities for women, addressing corruption and improving discipline. He is also encouraging citizens to report crime and police misdeeds through social media, which has already resulted in an arrest.

While Kramer’s promised reforms are encouraging, improving security in what is often depicted as one of the world’s most dangerous countries will not be easy. PNG’s police force is massively understaffed, poorly resourced, ill-disciplined and heavily factionalised. Even if reform were to improve the state’s police force, PNG’s serious fiscal crisis means that Kramer, and the still-to-be-appointed new police commissioner, will need to look beyond the RPNGC to find answers to PNG’s security problems.

One possible place to start looking will be PNG’s private security industry, which although intersecting with many areas of public policing has been largely ignored in policy and development discussions to date.

The private security industry has become the largest provider of security in the country. According to PNG’s Security Industries Authority (SIA), which is the designated regulator under the Security (Protection) Industry Act 2004, the number of licensed companies grew from 173 in 2006 to 464 in 2016, with a total workforce of around 27,709 security guards. These official figures don’t include what are believed to be the much higher number of unlicensed security companies and personnel operating in different parts of the country. However, the number of licensed guards is still well over three times that of serving police officers and exceeds the combined strength of PNG’s three ‘disciplined services’ – the RPNGC, PNGDF and correctional service. The industry is a major employer, with some claiming that it is now the country’s third largest source of employment. While available figures are rubbery, the SIA estimated the value of the industry in 2016 as between PNGK833 million and PNGK1 billion.

Companies come in all shapes and sizes and provide a range of services. They include local offices or franchisees of transnational security corporations with global reach, well established foreign and locally-owned firms, through to a plethora of smaller entities operating in particular areas. In addition to static guards, services include personal protection, training, assessment, rapid response, tracking and surveillance.

Industry growth reflects high levels of insecurity and fear of violent crime, combined with declining confidence in PNG’s state police. Household victimisation surveys confirm that lack of trust in the police is a major contributor to insecurity in urban areas, while regular surveys of businesses have produced similar finding, as well as documenting the steady rise of investment in private security. According to the World Bank, this investment is higher in PNG than the average for both the Sub-Saharan Africa and Latin America regions.

While acknowledging this reality is needed to improve security outcomes for PNG’s more-than 8 million citizens, there are three key challenges in attempting to engage with private security organisations.

First, private providers are highly exclusionary. The industry is most visible in PNG’s rapidly growing towns and cities, where government, business, and private wealth are concentrated. PNG’s prolonged natural resources boom in recent years has been a catalyst for growth, with a number of companies also operating in rural areas where the major extractive projects are located. PNG’s hosting of APEC in 2018 provided another major, albeit temporary, boost to the industry. As illustrated by the Paladin case, Australia’s off-shore detention facilities on Manus island have been a particularly lucrative opportunity for a succession of private security companies. In other words, these providers currently privilege powerful state and business interests over security of ordinary citizens. Re-incentivising private providers to improve public security will not be easy and, indeed, might prove to be an insurmountable challenge.

Second, the industry is poorly regulated. As well as reputable companies, both foreign and locally-owned, the industry has attracted its fair share of cowboys and fly-by-night operators. PNG presents a particularly challenging environment for those companies that strive to operate by the stated rules. Fierce political rivalries and nepotism play a significant role in decision-making around the allocation of government and other major contracts. The more established companies strive to do the right thing and have been lobbying government for a more transparent and effective regulatory framework. For others, however, playing by the unspoken rules of the political game remains a more attractive and profitable option.

Finally, although extensive interaction between police and private security occurs in practice, there are concerns around encouraging further collaboration. These include sensitivities about private providers encroaching further on areas that many believe should remain the exclusive preserve of public police; concerns that the growing prominence of private providers diverts attention away from the need to strengthen the police; and perceptions that public-private security collaborations tend to privilege business interests over those of ordinary citizens.

While there are many potential risks, policymakers would benefit from better understanding this burgeoning sector. As attested by its global growth, private security is here to stay. In acknowledging the inherently plural character of security provision in PNG, policymakers should explore whether the strengths within the private security industry might compensate for the weakness of the RPNGC, and vice versa. For example, PNG’s police could benefit from better access to the resources, skills, technology and intelligence of large private security companies. The RPNGC and private firms already cooperate informally. Could the industry and government develop regulatory and operational frameworks that allow police and private firms to work together under certain circumstances, with mutual benefit for both?

Ultimately, our focus needs to be on improving security outcomes for all Papua New Guineans, including its most vulnerable citizens. While seeking to strengthen the struggling police remains a critical priority, exploring other options in PNG’s fluid and changing security landscape should not be denied because of a narrow devotion to one institutional form.