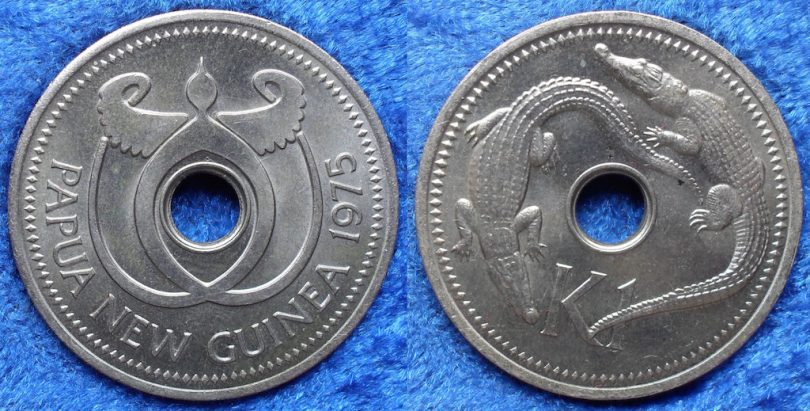 I made my first visit to Papua New Guinea in 2006. The economy was doing well. Commodity prices were high, and revenue was pouring in. If back then someone had predicted that a decade on government revenue would be lower than it was at the time, I simply wouldn’t have believed them. No-one could be sure how long the commodity price boom would last. Revenue growth might slow. There would be bad years as well as good. But it was out of the question that overall revenue would not grow over time. In hindsight, I was too conditioned by my previous decade of work on Asian economies such as India and Indonesia where an upward trajectory in government revenue is taken for granted.

Today in PNG, adjusting for inflation, government revenue is expected to be below its 2006 level. Revenue from big resource projects, which in 2006 was about K3 billion in today’s prices, has all but disappeared. Revenue from the broader economy is higher than it was in 2006, but has fallen sharply since 2014, and the remaining increase is not enough to make up for the disappearance of resource revenues. 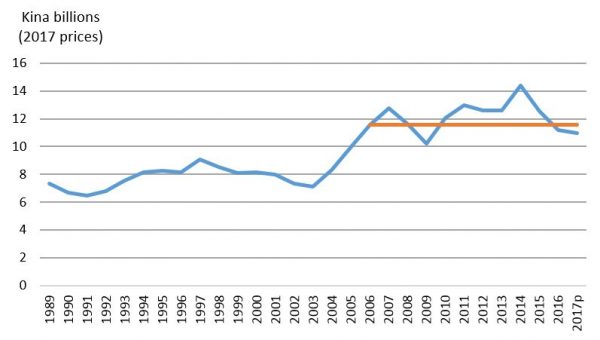 What about expenditure? Back in 2006, there was no government borrowing. Now borrowing is at record levels. So expenditure is back at 2011 or 2012 rather than 2006 levels. But that makes things sound better than they really are. Salaries have increased massively. So has the interest bill. Both of these variables are difficult to change quickly. They are committed rather than discretionary expenditures. Take out salaries and interest, and discretionary spending is also back at below 2006 levels. 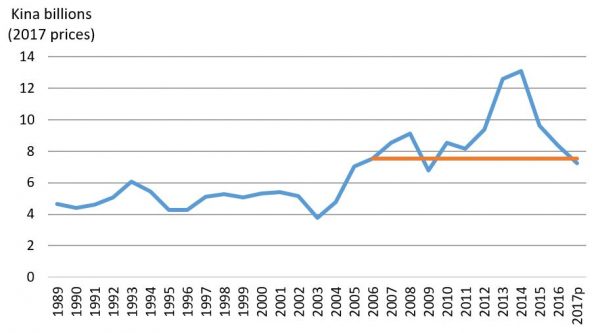 Back in 2006, money was coming in so fast that the government didn’t know how to spend it. But things are far tighter now. For a start the population is 30% larger. There was no free education in 2006 (now worth K600 million). Payments to the provinces and districts are now much larger. And there are huge government arrears of unpaid bills and overdue superannuation contributions.

Comparing government revenue and discretionary expenditure in 2006, 2016 and 2017 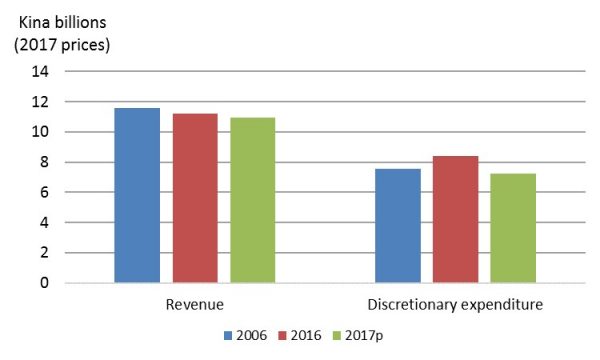 At the time, 2006 seemed to be near the beginning of PNG’s boom. In Port Moresby the boom has continued. Its shopping malls and traffic jams make for a very different experience compared to when I first visited. But, as this analysis shows, government revenue has not kept pace with the economy. That is why the PNG government as a whole is facing the very same expenditure problems people were talking about when I first arrived: police with no cars, police cars with no petrol, roads with no maintenance. The recent DFAT assessment of aid to PNG notes that current government funding for road maintenance is “equivalent to 2010 levels and is insufficient to prevent further decline in the aggregate condition of Papua New Guinea’s national road network.”

There is no simple way out. The return of revenue and discretionary expenditure to the levels of a more than a decade earlier should be a wake up call. It needs to be shared by the PNG Government with MPs and the people in order to explain the need for tough measures and difficult reforms.

In our 2017 PNG Economic Survey, we argue for a depreciation of PNG’s overvalued exchange rate to stimulate the economy to create jobs and boost revenue. Expenditure prioritization is also critical. With revenue back below 2006 levels, PNG simply can’t afford new universities and large MP funds.

Stephen Howes is Director of the Development Policy Centre. The analysis in this blog draws on the ANU-UPNG 2017 PNG Economic Survey, a seminar on which will be held at the Australian National University this Wednesday 11 October at 12.30pm (the podcast from this seminar can be found here). The 2017 figures are from the recent supplementary budget.