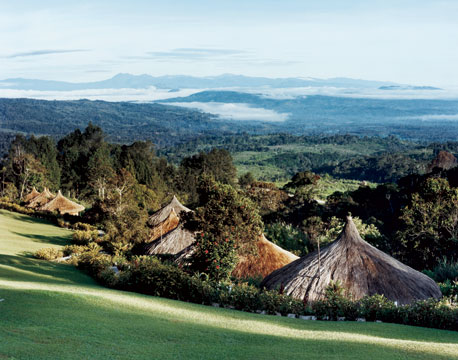 It is expected that the final report of the Commission of Inquiry into Special Agricultural and Business Leases (SABLs) will shortly be tabled in Papua New Guinea’s national parliament, but no one yet knows what it will recommend, let alone whether Peter O’Neill’s new government will act on those recommendations. Indeed, one newly elected MP has caused a bit of a stir by calling for an end to all such inquiries on the grounds that they create a public perception of guilt and corruption without ever leading to any criminal prosecutions.

In this particular case, the question is how it came to pass that more than 5 million hectares of customary land has been alienated in recent years through the grant of SABLs to landowner companies associated with some rather dubious ‘development partners’, most of whom appear to be logging companies seeking to exploit a loophole in the Forestry Act on the pretext of clearing native forests for large-scale agricultural projects that are unlikely to materialize (Filer 2011).

At the end of July, Greenpeace published a report about this ‘land grab’ in an effort to persuade the PNG government that something had to be done about it. This prompted some Australian journalists to wonder what is likely to happen once the findings of the Inquiry have been tabled in Parliament. Although we do not yet know what these findings are, we already have access to many of the transcripts of the hearings conducted between August last year and January this year, and it is clear that the Commissioners were far from impressed with the transparency and legitimacy of the process by which so much land has been alienated from its customary owners.

Of course, the PNG government is unlikely to take any sort of action simply because of demands made by an organization like Greenpeace or questions raised by a group of Australian journalists. But there is a broader range of stakeholders inside PNG who have been raising concerns about the potential consequences of this ‘land grab’ for more than three years now, and it was pressure from this coalition that persuaded the former Somare government to establish the Commission of Inquiry in the first place.

Some members of this coalition are worried that public pressure from people readily identified as foreigners could be counter-productive because it may lead the PNG government to retreat into a defensive nationalist posture and hence reduce the likelihood of any action being taken to implement the Commission’s recommendations – even if any strong action is actually recommended. Their sense of alarm was raised when the Secretary of the Commission recently announced that there is “no moratorium” on the grant of new SABLs by the Department of Lands and Physical Planning.

A moratorium was in fact part of the Cabinet decision that led to the establishment of the Commission of Inquiry, but for some odd reason, implementation of the moratorium was included in the Commission’s terms of reference in July last year (Appendix 2 in Filer 2011). In a technical sense, the Secretary is quite right to say that this responsibility should have remained with the Minister for Lands. In any case, no new SABLs were issued by the Lands Department after the Cabinet decision had been announced — until the week before the Greenpeace report was published.

The PNG National Gazette published on 27 July announced the grant of two new SABLs in Oro Province, both for a period of 50 years. At first sight, the notices might not seem too alarming, since the areas covered by these two leases were said to be 21.520 hectares and 16.830 hectares respectively – a mere drop in the ocean of more than 5 million hectares already removed from customary ownership. However, officials in the Lands Department have developed an odd habit of substituting full stops for commas.

The last SABL to be gazetted before the announcement of the Cabinet decision was said to cover an area of 109.58 hectares, but was later revealed to be an area of 109,580 hectares – a thousand times larger. It would indeed be quite remarkable if any government official had recently managed to survey an area of customary land to within one thousandth of a hectare, but that is not the only reason to think that an order of magnitude problem has become systemic.

The two new leases seem to lie in close proximity to another set of existing agricultural leases that cover a combined area of 43,902 hectares of what is apparently state land, where two developers of so-called ‘agro-forestry’ projects had already sought permission to clear the native forests two years ago. We know that a Forest Clearing Authority was granted to one of these companies, and although it only covers 5,552 hectares of forested land, it has already proven its worth. More than 63,000 cubic metres of logs, with a combined value of more than K11 million, was exported from this area in 2011. An area this size cannot support this rate of extraction for much longer.

We do not know whether a second Forest Clearing Authority was ever granted to the other company over the remaining 38,350 hectares of ‘state land’ dedicated to the second ‘agro-forestry’ project in the same part of the province, but there is as yet no record of logs being exported from this second area. Nor is it clear whether the same corporate interests are involved in both projects. Nor has the Commission of Inquiry thrown any additional light on this matter, since the Commission was only asked to investigate the alienation of customary land for projects of this kind.

But let us now consider an odd coincidence. If we suppose that the two new SABLs cover 21,520 hectares and 16,830 hectares respectively, and we add these two numbers together, what do we get? We get 38,350 hectares. In other words, we get a strong suspicion that this has turned out not to be state land after all, and the Lands Department is seeking to rectify the matter by turning it into customary land so that it can then be ‘properly’ alienated through the grant of SABLs.

If this chain of reasoning and arithmetic makes sense, we now have to ask whether the grant of the two new SABLs is merely an act of rectification, or whether it marks the end of the moratorium and the start of a new wave of alienation. If it does mark the end of the moratorium, why would it have happened when it did, and who would have made the relevant decisions?

Was someone thumbing their nose at Greenpeace? That seems most unlikely, since so few people had seen drafts of the Greenpeace report before it was published? Was someone seeking to pre-empt the recommendations of the Commission of Inquiry? More plausible perhaps, but very few people know what these are going to be. Did someone decide that a Cabinet decision ceases to be government policy when a national election is held and a new government is installed? That does sound quite plausible until one considers that many Cabinet decisions have no effect on the behaviour of individual ministers and public servants even without a change of government. So maybe it is just a slip of the keyboard.

In any case, we must now wait until the report of the Commission of Inquiry has been tabled in Parliament before we can begin to assess the likelihood of its recommendations being implemented by the new government. So watch this space.

Colin Filer is an anthropologist and associate professor at the Crawford School of Public Policy, Australian National University.