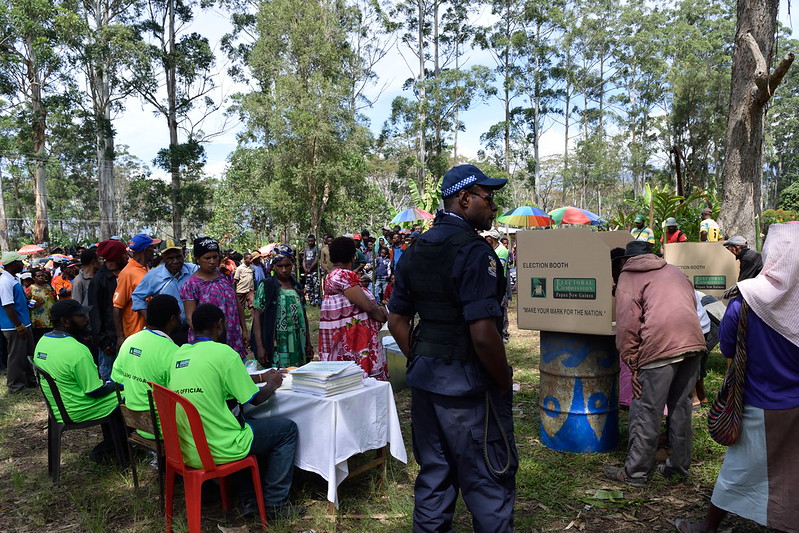 Political leadership in PNG: women parliamentarians in the 2017 election – part one

The three women parliamentarians who were elected in the 2012 Papua New Guinea (PNG) election failed to win re-election in the 2017 general election. Their electoral defeats only deepen the concern for gender representation in parliament. However, an analysis of their short-lived political careers reveals that their conduct in parliament is consistent with the demands and expectations made of the Papua New Guinean politician. In PNG there are two arenas in politics a member of parliament (MP) must contend with to ensure survival: the first, naturally, is electoral victory; the second is the politics of electoral development – when elected, an MP is expected to successfully deliver development to their electorate.

Re-election is certainly not assured: over 50 per cent of incumbent MPs in PNG do not get re-elected to a second term in office and over half have lost their seats in each election since 1972. The defeats of the three women are consistent with this national trend. Therefore, an MP’s record of accomplishment in development (and public perception of it) is essential in understanding the high turnover rates in elections. A ‘track record of service delivery’ and ‘someone who looks after the community’ were essential qualities that voters sought in the 2017 election. The politicisation of electoral development or provincial disputes can seriously affect his or her chances of re-election.

Part one of this series looks at the political controversies faced by the three women in their respective electorates that affected their public image as a political leader. Part two discusses three key findings and concludes that while there would undoubtedly have been obstacles relating to gender, the women MPs faced the same type of electoral challenges as their male colleagues would have.

Loujaya Kouza’s media background and her strong voice on political issues as a radio announcer may have assisted in securing a seat in the 9th parliament with 7364 votes. Kouza’s political career was dominated by political infighting over the establishment of the Lae City Authority (LCA). Then prime minister Peter O’Neill relieved Kouza of her ministerial responsibility to oversee the creation of the LCA. However, the establishment of the LCA did not go down well with other leaders of the province, with the new funding arrangement their main concern. The redistribution of financial and administrative powers would impair the Morobe provincial government’s ability to deliver services to rural areas outside of Lae district. Kouza’s decision to boycott various Tutumang (Morobe’s local name for its provincial assembly) escalated the political infighting and tainted her image for the people of Lae.

Kouza resigned as the chairperson of the LCA in 2016 and moved to the opposition. In question time in parliament Kouza insisted that then prime minister Peter O’Neill come out clearly on the funding arrangements of the LCA. Peter O’Neill noted that Kouza’s resignation as the chairperson of LCA was not valid under the provisions of the LCA legislation. Kouza admitted that the LCA and her move to the opposition affected her plans to develop Lae. In 2016, Aihi landowners of Lae city demanded that Kouza attend to Lae city’s development needs, describing how the deteriorating road was an impediment for access to services and conducting business in Lae. Kouza was not alone in her inability to resolve this developmental need, but according to voters, Kouza had not sufficiently prioritised the development needs of the people of Lae. In the 2017 election, Kouza lost in the first round of counting under the limited preferential voting (LPV) system.

Julie Soso came to prominence as a radio announcer and a former president of the Eastern Highlands Council of women in 1996. Soso contested the Eastern Highlands seat on several occasions, eventually winning the regional seat in 2012. Circumstances surrounding the appointment of the provincial administrator of the Eastern Highlands provincial government affected Soso’s political career. In 2016, Solomon Tato, the suspended provincial administrator, initiated court proceedings over a contractual agreement that was breached by the Soso administration. The court found Soso guilty of seeking to frustrate the court order by writing formally to Tato to vacate the office. The political impasse in the province escalated to the extent that Soso called on the prime minister to intervene and help mediate the conflict. Soso admitted that the issue was politicised and everyone in Eastern Highlands was aware of the political infighting.

In 2017, alongside 48 other candidates, Soso contested the Eastern Highlands regional seat. After the distribution of the first preferences, she received 31,644 votes in the preliminary voting round. The elimination processes of the LPV affected Soso, as significant votes were pulled away from her compared to the 2012 election.

Delilah Gore was a public servant before entering politics; she attributed her success to a successful campaign of visiting every local ward in the Sohe district. However, Gore’s involvements in the appointment of the provincial administrator, her involvement in ousting the provincial governor and her outburst against a flight attendant sums up her political career. Firstly, in 2014 the Oro provincial assembly endorsed retired General Jeffrey Dademo as acting provincial administrator to the National Executive Council (NEC). Tufi local government president, Jaff Taua, subsequently said:

Gore has never turned up for any of the PEC [Provincial Executive Council] or assembly meetings and should not use her power as a cabinet minister to influence the running of the provincial administration … In fact, she had disqualified herself from the provincial assembly after failing to turn up for three consecutive meetings.

Gore denied allegations regarding her involvement in the appointment of the administrator. Gore was also alleged to have used public funds belonging to the Department of Community Development to pay for accommodation for Oro councillors in a bid to oust provincial governor Gary Juffa. Gore strongly denied the allegation. Juffa challenged Gore to explain the use of public funds totalling K17,000 (US$8000) to accommodate the village councillors at the Grand Papua Hotel in Port Moresby.

In the final controversy, Gore faced the leadership tribunal about an incident on an Air Niugini flight in 2015. The National Court declared that on 24 April 2015 Gore behaved inappropriately as a national leader towards a flight attendant before being removed from the aircraft as a disorderly passenger. Gore was penalised three months without pay for misconduct for her inappropriate behaviour.

In 2012 Gore won by over 6105 votes, but at the 2017 election she was defeated by just over 200 votes. While she did not suffer the fate of outright rejection by her voters, the manner in which she was defeated is noteworthy. The runner-up in 2012, Henry Jons Amali, defeated Gore with those 200 votes after elimination, indicating that Gore had retained support in the Sohe Open electorate. Had it not been for the LPV system, she would have retained the seat. According to Wood and Laveil, the 2017 distribution of preferences under LPV indicated that there were protest votes against the People’s National Congress (PNC), the party for which Gore was a candidate. With the unpopularity of the PNC in Oro Province, backed by Juffa’s staunch criticism of the PNC, there is a plausible case that those protest votes affected Gore’s chances of election victory. Gore’s involvement in provincial assembly politics, perhaps not as evident as Kouza’s and Soso’s, might have been used against her during the 2017 campaign.

Part two in this series provides analysis of these three stories and concludes that as well as any barriers based on gender, these three women MPs had to confront the same factors influencing electoral success as any candidate in PNG’s political climate.

This is an edited version of In Brief 2021/01, originally published by the Department of Pacific Affairs at ANU as part of their In Brief series.

Russel Yangin
Russel Yangin is a lecturer in political science at the University of Papua New Guinea.