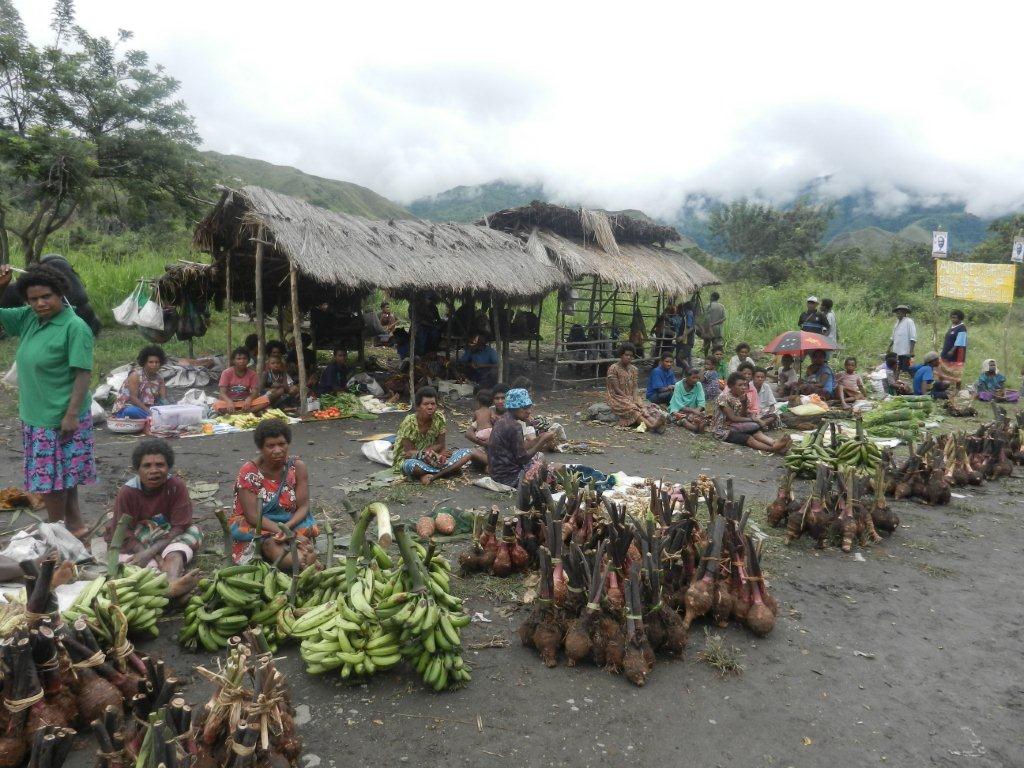 The growth performance of Papua New Guinea and the status of its public finances improved significantly in the last decade, underpinned largely by the boom in global commodity prices of key PNG exports, and good macroeconomic policies. The national budget, which was in deficit from the late 1990s, recorded its first surplus in 2004, public debt fell from more than 60% of GDP in 2003 to about 25% by 2011, the trade balance recorded large surpluses, and foreign reserves improved. The country also passed several record national budgets due to a tripling of revenue. And yet many suggest, with good reason, that it was a wasted decade. What lessons can PNG learn in terms of its experience with rapid revenue growth moving forward?

The recent surge in economic growth has been broad based

According to PNG Treasury figures, the country’s economic growth averaged 5% annually from 2003-2011. Strong growth in commodity prices in the first part of the decade led to rapid nominal growth in the minerals sector (mining, oil and gas combined), averaging 21% between 2003 and 2008. This source of growth has been absent since the Global Financial Crisis, but strong non-minerals growth has continued throughout the decade, with an average of 5.5% for the 2003 to 2012 period. Reflecting the commodity price boom earlier in the decade, the share of non-minerals output to total GDP fell from 82% in 2003 to 73% in 2008, but has now recovered to 86%. The strong non-minerals growth throughout the decade reflects increased private sector investment and expansion of key sectors, including construction, transport and communication, wholesale and retail. Spill-over effects of the mining sector boom, including construction related to future projects, was clearly important. Looking forward, strong economic growth is expected to continue, with a spike in 2015, as the PNG LNG project comes on stream. 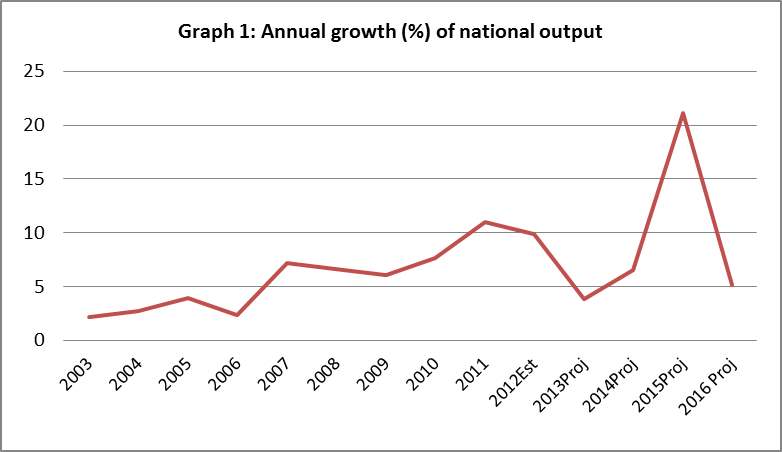 Source: PNG Treasury budget documents. Note for this and future graphs 2011 and 2012 figures are from 2012 Mid Year Economic and Fiscal Outlook (MYEFO) Report; figures for other years are from 2012 or earlier budgets.

Total revenue and grants rose from about K3.6 billion in 2003, nearly tripling the national budget to K9.3 billion by 2011 (Table 1). When adjusted for inflation, the national budget has almost doubled in the same period. With more subdued revenue growth, total revenue and grants are projected to increase by about K1 billion a year in the short term, but the growth rate of total revenue will be lower though still positive in the coming years (see Graph 3). The growth in revenue was also volatile: revenue as a share of GDP fluctuated between 29% and 37% of GDP. 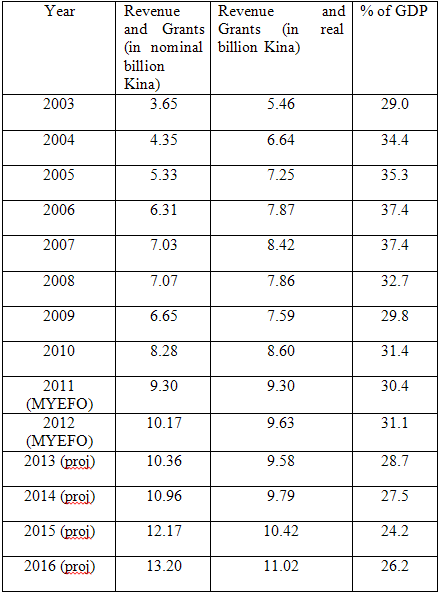 Source: PNG Treasury budget documents. Note: The GDP deflator for each year is used to adjust for inflation. 2011 prices are used.

What caused the surge in revenue?

To understand the surge of revenue in PNG, we can divide total revenue into: revenue from minerals; aid; and all other revenue. The share of these three in total revenue is shown in Graph 2 below. 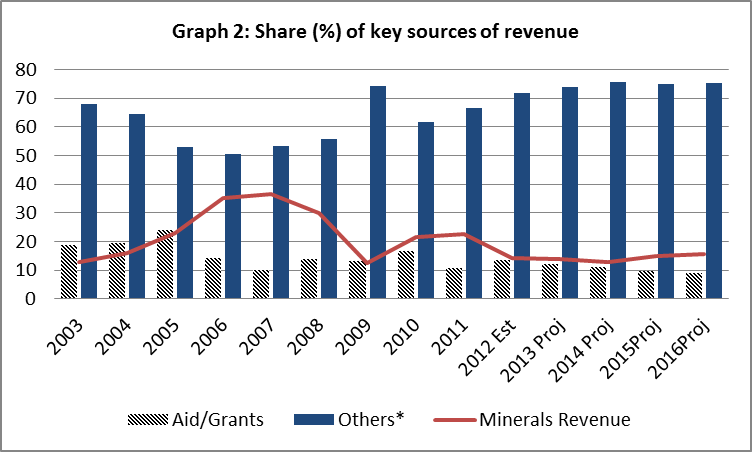 Foreign aid is a declining source of revenue, which fell from about 20% of total revenue in the early 2000s to just above 10% today.

Other revenue comprises personal income tax (18% of total revenue on average from 2003-11), domestic goods and services taxes (14%), corporate tax (12%) and trade tax (6%). Together, these key sources made up about 50 % of the country’s total revenue, and other revenue as a whole is now more than two-thirds of total revenue. Their share fell in the boom years from 2005 to 2008, but is now starting to rise again (Graph 2).

Graph 3 shows that average real annual growth rate of total revenue fell after the Global Financial Crisis (to about 5% from 7.5%), and is projected to fall below 5% in the medium term. In terms of revenue groups, minerals revenue experienced solid real growth (27%) in the boom period, but fell by (12%) due to low commodity prices in the subsequent period. Average annual growth of other sources of revenue quadrupled to 12% from 2008 to 2012 reflecting the strong growth of the economy as a whole. In the medium term, all categories of revenue are forecast to grow between 3% and 6% annually, except for foreign aid which is forecast to experience negative growth. With the recent fall in commodity prices, revenue growth in the coming years might be lower than forecast here. 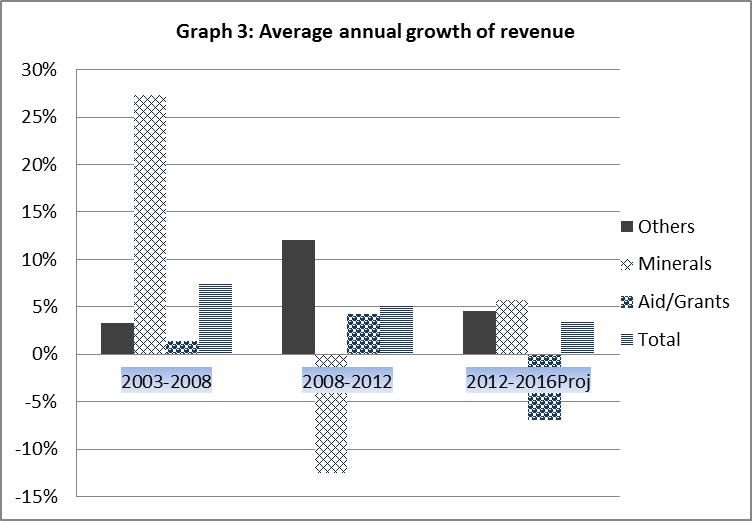 How has the increased revenue been used?

With the large increase in revenue in the last decade, the government did several things.

First, the government increased its expenditure. Both the recurrent and development budgets expanded (Graph 4), almost doubling over the last 10 years, an increase of just over K4 billion, after adjusting for inflation. Projections for the next few years show a small fall in public spending in 2013, and increases for both total revenue and expenditure thereafter (Table 1 and Graph 4).

Second, the government used the increased revenue to fix its fiscal balance which was in deficit before the turn of the decade. Under the guidance of the 2002-2007 [pdf] Medium Term Fiscal Strategy, the government aimed for a balanced budget by 2008 and in the medium term. The budget recorded its first surplus in 2004 (1.4 % of GDP) due to unanticipated increase in minerals revenue. However, when international prices of gold, copper and oil dropped due to the global financial crisis, minerals revenue decreased (Graph 2), which resulted in budget deficit in 2009 (Graph 5). PNG Treasury estimates a deficit in 2012 based on government’s fiscal outcomes and external factors in the first six months, including low commodity prices and appreciation of the exchange rate, all of which will be crucial determinants of budget projections for 2013 and beyond.

Third, the government also used the large revenue increase, and surpluses in the boom years, to retire its burgeoning public debt, as well as its liabilities to domestic financial institutions. As shown by Graph 6, from a level of over 60% of GDP in 2003, public debt was brought down to a comfortable level of 24% by 2011. It is estimated to increase to 25% in 2012, but projected to fall well below 20% in the medium term.

Despite the improved fiscal condition and the increase in public expenditure, it seems that the country may have missed the opportunity to turn the rise in national revenue into tangible development to improve the socio-economic conditions especially of its rural population in the last decade. The large rural population of the country have felt little to no impact of the decade-long increase in public expenditure as crucial rural infrastructure such as airstrips, roads and jetties close down, and basic public services such as health and education fail to reach them. The country’s Human Development Index has fallen to 153 out of 187 countries from 132 in 2003. (See also my earlier blog which presents additional anecdotal evidence of the lost decade).

Lessons for the future

The governments of the last decade must be applauded for their sound macroeconomic management including the improvement in public finances. However, much is needed to improve the quality of public expenditure so that public funds spent through the national budget create tangible development. Although revenue growth will probably be lower for the next few years than has been seen in the past, it is expected to stay positive. In any case, even after inflation, the PNG Government already has twice as much revenue to spend now as it did a decade ago. Using the experience of the past decade, it is imperative that the government establishes sound mechanisms not only for macroeconomic management, but also to improve the quality of its public expenditure. More research is needed to understand where the additional funds have gone, and how the development impact of public expenditure can be enhanced.

Andrew Anton Mako is a researcher with the Development Policy Centre of the ANU. He has just completed his Masters in International and Development Economics at the Crawford School of the ANU. This research is conducted as part of the Promoting Effective Public Expenditure (PEPE) in PNG project, which is being carried out jointly by Devpolicy and the National Research Institute. For more on PNG budget analysis, come to the 2012 PNG Budget Forum on Wednesday September 12 at the NRI Conference Centre in Port Moresby from 9am-2pm. The Forum is part of the PEPE project, and is open to the public. For more details and to register, contact Eunice Kivan on ekivan@nri.org.pg or call +675 326 0061 ext. 345