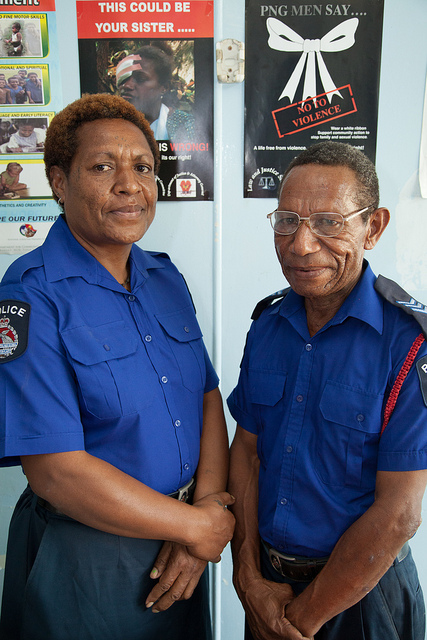 When women in Papua New Guinea experience violence and try to access help, the police can often be just another challenge to surmount. Under-resourced, slow to act, and sometimes dismissive of domestic violence cases in particular, the police response has been criticised in report after report on the family and sexual violence (FSV) challenge in PNG, despite the dedication of some individual officers to the issue.

Family and Sexual Violence Units (FSVUs) within the PNG police have been one of, if not the main attempt to improve the response that survivors receive when trying to access justice. The Australian aid program has been a particular supporter of this approach and, through the PNG-Australia Law and Justice Partnership (PALJP), has supported the establishment of 15 FSVUs across the country since 2008.

A recent evaluation of FSVUs provides some insight into whether they are working, exactly what police officers and survivors are up against, and what more needs to be done.

In many ways, the report paints a grim picture of the operating environment for FSVUs – not allocated resources in police budgets (this was bluntly stated: “The Evaluation Team found no evidence of budgets allocated for FSVUs”), not formally recognised within official police structures, under-staffed, and in some cases, under-trained.

Although the report notes the major problems with data collection at many FSVUs, particularly case data, the data tables in the report show increasing demand for services year-on-year. They also show just how low the rates of arrest are in cases seen by a FSVU—something that earlier research in Lae also demonstrated. For example, in Lae in the first quarter of 2015, out of 49 FSV cases only two arrests were made. In Waigani, from 411 FSV cases in 2014, there were only seven arrests, and no follow-up at all in 109 of those cases.

The evaluation argues that the low arrest numbers are “linked to the fact that most FSVU officers are female and they are not in a position to arrest people due to potential threats to their safety” – but it cannot show that arrest rates would change if the gender profile within FSVU staffing did.

The low level of arrests may be more a consequence of FSVUs being ghettoised within a chronically under-staffed police force. In a presentation at last year’s State of the Pacific conference in Canberra on the Kokopo FSVU, Stephanie Lusby’s research showed that many male police officers don’t see working for a FSVU as a good career move – it is work that is less likely to lead to recognition or promotion, and there’s a lack of senior positions within the units. Officers volunteer to work in FSVUs, and women have been more willing — and they were also willing to go out and make arrests.

Both Lusby’s research and the evaluation show that the overwhelmingly female FSVU officers struggle to get assistance from their overstretched colleagues when they need it and ask for it. Their resources, such as cars, are often poached by other police units (and the evaluation shows that many officers working in FSVUs don’t know how to drive). They are also swamped with cases. Adequate resourcing, of FSVUs and the police more broadly, would seem to be the biggest constraint on arrest numbers and case follow-through, rather than the gender of officers.

Interim Protection Orders (IPOs) are another area where confusion reigns – some locations charge to issue them, some take a long time to issue them (putting the survivor at risk in the meantime), their availability is largely limited to urban locations, and they are ineffective if breaches are not, or cannot, be reported. And, IPOs often depend on coordination with other service providers: coordination that, on this issue and several others throughout the report, is often not happening effectively.

The report doesn’t summarise itself very well. At one point is says that FSVUs have ‘in principle’ expanded services, the meaning of which is completely unclear. Tucked away in an appendix, the report actually gives the effectiveness of the project it is evaluating (Australian support to the FSVUs) a red light status – a fail grade. A broader summary of the report’s findings is that some FSVUs are achieving positive outcomes and have catalysed some gradual changes in attitudes on FSV within police, but there are large differences across locations, many problems and a long way to go. The report implicitly argues that FSVUs are deserving of support and continuation through its recommendations section, which details ways to address particular areas of weakness.

Better coordination and the development of referral networks is one of the key recommendations in the report. It recommends Femili PNG’s case management approach in Lae be looked at as an example of good practice in PNG. (Disclosure: Devpolicy supports Femili PNG in a pro-bono capacity.)

Above all else, this evaluation shows that if FSVUs are to achieve better outcomes for survivors, they need more respect and more resources. They will also do better as part of an ecosystem of service providers working together to support each other and their clients.

Ashlee Betteridge is a Research Officer at the Development Policy Centre. She also provides support to Femili PNG.