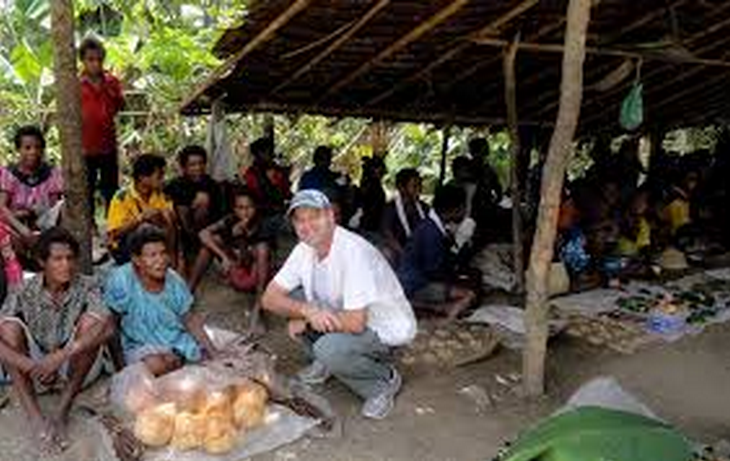 Paul Brockmann is the outgoing Head of Mission for Médecins Sans Frontières (MSF) in Papua New Guinea, focusing on providing medical and psychosocial care for survivors of family and sexual violence.

I caught up with Paul during his recent visit to Canberra to discuss MSF’s work in PNG and the challenges facing the health sector more broadly. The following is an edited summary of our conversation. You can listen to a full podcast here.

Ashlee: Tell us a bit about MSF’s work, and your work in Papua New Guinea.

Paul: The work that we’re doing there is specifically with family and sexual violence. As a medical humanitarian organisation, we’re working on providing the medical care people need immediately after an incident, making sure that the repercussions medically down the road are managed and hopefully avoided completely.

Ashlee: How does the level of family and sexual violence in PNG compare with other countries that you’ve worked in?

Paul: The first time that I personally worked with sexual violence specifically was in Nigeria in 2007-08. I was down in the Niger Delta. We started doing more community outreach to educate people about the importance of medical care immediately after an incident of rape. It was pretty shocking. And then I’ve also touched on that work in Congo and also in India.

More of the women and children of PNG face violence or sexual violence in their lives, I think. This is anecdotal because there’s not good data on this. But I think more of them face it on a regular basis in their lives than anywhere else that I’ve ever been.

Ashlee: How is MSF working on this issue?

Paul: About a decade ago before MSF started working in PNG, the Family and Sexual Violence Action Committee created this concept of a family support centre, which would be a sort of one-stop shop.

But the most time-sensitive issue is the question of pregnancy or HIV infection. Because of course, if you get pregnant and you’re a 15-year-old girl, you’re going to face some very tough questions down the road, because this is not a context in which women have the ability to freely choose abortion. And if you have been raped by someone who is HIV positive, then you have a limited time window, 72 hours, in which to take post-exposure prophylaxis and really reduce your risk.

So what we found is that awareness of the medical emergency nature of rape is extremely limited. If [survivors] do anything, the most common reaction I think is try to move on with your life. To try to ignore it. Possibly tell no one. Possibly tell your closest family or friends. Especially if you’re a 13-year-old girl. What are you going to do? Who are you going to tell? You’re really afraid of what the ramifications will be.

The problem is if you don’t get medical care, then three months later there may be very significant ramifications and it’s then too late to deal with them then in a preventive way.

Ashlee: What kinds of cases are you seeing come into the family support centres? What type of violence is most prevalent?

Paul: We’ve got six and a half years of data from all the different places that we’ve worked now. Roughly, 80% are intimate partner violence cases. This is to say primarily women, but some men, that are trapped in cycles of violence with girlfriends, boyfriends, spouses, and/or children that are physically abused within the family. About 20% are survivors of rape or other sexual violence.

The cases that usually go most to our hearts are the fairly significant cohort of underage girls and boys that have been raped, usually by people they know, people from within the community, sometimes uncles, aunts; sometimes parents, relatives; and also the women that are trapped in these cycles of violence with abusive spouses.

Ashlee: What do you think is driving these high levels of violence in PNG? Do you have any insight on that from your work? I know that’s a difficult question.

Paul: That’s a very common question. I think it’s a well-intentioned question. And it’s one that I think absolutely merits study. But if I can say, I think focusing on where it comes from to the exclusion of providing service now is detrimental for the patients. As a humanitarian medical group, what we try to do is make sure that we focus on the patients now.

However, I have done some thinking about this. And I think it’s social breakdown. I think it’s a breakdown of the protective mechanisms that worked for thousands or hundreds or tens of years.

The mechanisms that bound men and women and children in complex societies, those have deteriorated and not been replaced by the types of robust legal protections that we have in Australia or Europe or the US.

Ashlee: So speaking of protection, what options do patients at the family support centres have to access wider services? Is that a gap at the moment?

Paul: It’s a pretty substantial gap. It’s one that I would say is attracting a bit more attention with time. If you sit there and you look at the numbers of individual persons attacked and the number of cases that actually go to court, it would depress you. But if you look statistically at what was done five years ago versus now, maybe you’ll see a little bit of hope.

In the PNG context is there’s so much complexity, there’s so much going on, that we really need to ask: where are we going to try to have an impact? Pick that area and stick with it. And that’s what we’ve done with the medical service provision.

At the same time, we do know that our patients need access to other services, and there are some. In Lae, for example, there are a couple of child protective service officers. In Lae, there are some people working with the office of Public Prosecutor that try to bring forward cases. Is it enough? Certainly not. Is it more than existed a decade ago? Absolutely. So you’ve got to take that and you’ve got to reinforce it.

What’s really exciting to us at MSF right now is this new model to create a more robust management of those onward references to services. At the moment, it’s being called the Case Management Centre. Whatever you call it, it’s what patients need, which is to get the medical care, get referrals, make the choice.

Ashlee: How well do you think the government and other agencies in PNG are working on this issue?

How are we going to give these patients the services they need immediately and then make longer term interventions that start to break the cycles of violence and create a more positive path forward?

Again it’s a bit of a glass half-full, glass half-empty thing. If you look at the prevalence of violence, you think, this really is a serious public health disaster. And you start to get depressed. But if you look at the steady, slow improvement—Rome was not built in a day. You’ve got to take it step by step, stay focused, take baby steps, and then build from what you’re doing.

Already, in just the three months since the conference, we’ve seen in a couple of different provincial centres an increase in service provision, an increase in attention to the problems, an increase in those coordination mechanisms and action. We’ve seen now this funding that’s come from DFAT for the Case Management Centre in Lae, which I think is a very positive step. If we create those models, demonstrate the value of the models, and then encourage other people to adapt or adopt the models in their locations, that is going to start making a real difference.

Ashlee: Is that what you’ve found with the Family Support Centre, that this is a model that is starting to spread?

Paul: Absolutely. When we came in, I think it’s not an exaggeration to say that there were at most one or two places where a patient could receive the five essential services to protect themselves medically.

Now we’ve gone from just one or two regional centres to seven. Now, in a country with 22 provinces that is vast, where a huge percentage of the population is still rural and doesn’t have access to these referral care hospitals, that’s nowhere near enough. But it’s a start.

Ashlee Betteridge is a Research Officer at the Development Policy Centre. Paul Brockmann is the outgoing Head of Mission for Medecins sans Frontieres in Papua New Guinea. For more on the PNG Family and Sexual Violence Case Management Centre, click here.

Paul Brockmann is the outgoing Head of Mission for Medecins sans Frontieres in Papua New Guinea.