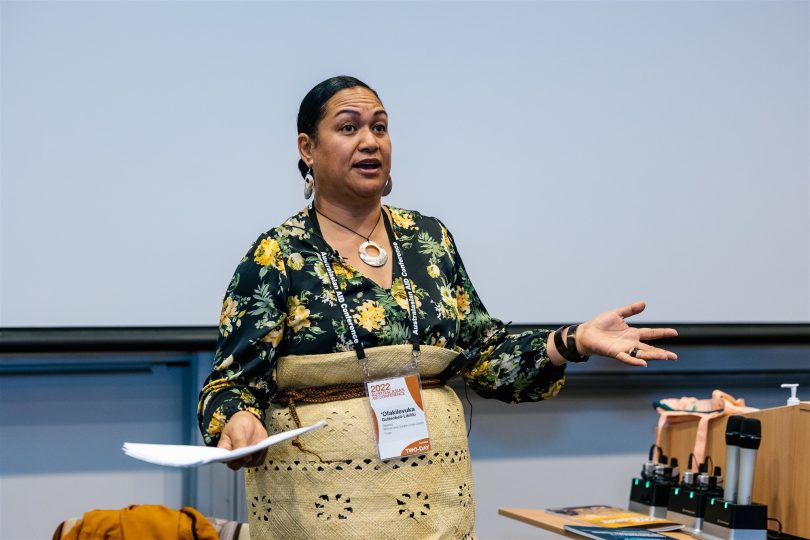 This is an edited extract of the 2022 Mitchell Oration given at the Australasian AID Conference in Canberra in November.

I have been working in the space of ending violence against women and girls for the last 18 years in Tonga. This year, I experienced something I had experienced many times before but not to the extent that it reached this year, it was the tipping point.  I was actually on the brink of “losing it”.

When Tonga underwent a humanitarian crisis in January of this year – the Hunga Tonga-Hunga Ha’apai underwater volcanic eruption followed by a tsunami – the NGO I work for, the Women and Children Crisis Centre (WCCC), was one of the first responders on the ground, within the first 72 hours, carrying out rapid safety assessments with women and children in the most affected communities on Tongatapu. This was followed by on-going daily psychosocial support to high-risk areas during the response phase. At the same time, Tonga had lost all forms of communication with the outside world – we couldn’t telephone or communicate electronically with anyone for about five weeks.

Within three weeks of rolling out psychosocial support during the response phase, Tonga had its first positive COVID-19 case which immediately sent the entire country into lockdown and borders closed.

Tonga was dealing with all these issues on its own. I was proud of my team at WCCC and the way we worked during the response phase, approaching our targeted women and children from high-risk areas with care, compassion and respect while ensuring that everything we did was based on the key guiding principle of “do no harm”. We knew exactly what to do, how to do it and executed it like professionals, albeit with the limited resources we had access to at the time.

We made sure the space we created was safe and that it wouldn’t bring too much attention to what we were doing. What turned out to be about a 45 minute conversation with these female leaders was the beginning of a relationship that we knew we had to continue nurturing throughout the response phase.

We had gained their trust and respect and thereafter we commenced our psychosocial talatalanoa (conversations), support and advocacy. We were provided with names and families who were at high risk and the most vulnerable to visit and carry out our “AHA” strategy that we use in any humanitarian crisis: Are you safe? How are you doing right now? Are you being listened to?

But all of what I have just explained is not what made me almost lose it.

As soon as our communication lines to the outside world were back to normal, humanitarian experts on gender-based violence (GBV) in emergencies started flooding our EVAW (ending violence against women) and GBV spaces. Pre-designed approaches of how to roll-out psychosocial support to communities were being emailed to those of us in Tonga. We were being invited to attend online information sessions on what these experts in GBV had to offer us. We were told that they had been in communication with government counterparts and had been given the go ahead to roll out the pre-designed activities on the ground. So basically, we didn’t have a say – it was going ahead regardless.

WCCC reluctantly joined these interagency approaches – it was a situation where if we didn’t, we would not have access to all the areas they had access to because they could pay for chartered flights and boats and we couldn’t. To them, it may have seemed that we were validating their approach (which killed us internally) – but to us, it was our way of reaching these areas and ensuring that we carried out our psychosocial support the best way we knew how, making sure that women and children in high-risk situations in these areas were referred to ongoing counselling, support and advocacy.

WCCC and I had never been made to feel so worthless and incompetent in the EVAW space as I did this year with that experience. I felt we had been bullied and disempowered.

I left Tonga for about two months over the July-August period because I felt if I didn’t, I was going to absolutely lose it. I felt like I had failed as a leader for my NGO. I had tried with all the energy I had left in me to call these interagency approaches to account. I emailed and discussed this with them several times expressing my concerns. I wanted them to understand their colonial approaches and break the pattern. I wanted them to just stop and hand over the resources to the NGOs on the ground. I wanted them to acknowledge their “power-over” and to stop bullying. At one time, a comment was made to me: “Yes, ‘Ofa we understand your concerns, but it was the Tonga Government who requested our help.”

I responded to this person by saying: “Yes, because they assume you are the experts in this area. You have a responsibility, and the ability, to respond by saying, yes, we have the resources and we would be happy to support your local experts on the ground. That is the difference between ‘power-over’ and ‘power-to’. That is how you can start contributing to decolonisation.”

Research I led with the International Women’s Development Agency (IWDA) in 2020 navigated through the knowledge and experience of 35 Pacific Island women, who have been working in the women’s rights movement space over the last three decades, who agreed to talanoa with me (or hold conversations) sharing their perspectives on the role of Global North organisations and the interactions they have had with them.

Participants described the power dynamics that reflected unequal relations. In the last decade, more so in the last five to six years, there is a strong feeling that Global North organisations, in particular donors, have started to be more forceful in dictating ways of working rather than listening to their partners on the ground – in spite of the Paris Declaration, Busan Partnership and Cairns Compact.

There is an urgency in what I am sharing today because the issues are very real and happening as I speak.

Australia’s Minister for Foreign Affairs, Penny Wong, said Australia would listen and would stand shoulder to shoulder with us. I want to see this turned into a reality.

Because the root of the problem is this: those with “power-over” and access to resources control the entire discourse and refuse to listen. When you have a team of experts sitting in an air-conditioned office, oceans and oceans away from your lived reality, there is no room for real and meaningful shoulder-to-shoulder partnerships.

“Locally led” or “localisation” become the terms in fashion. Programs and activities become a tick-box. We revert back to my European ancestors’ view of Tonga 140 years ago – they need us, we bring money and resources to their country.

There are so many things I want to say, and I could go on and on.

But I leave you with this thought: if we go back to how I was feeling in July–August of this year, Tonga almost lost a women’s rights leader at the expense of those with the power and resources not wanting to listen.

The top of the cliff isn’t the place to look at us;
come down here,
learn of the big and little currents,
face to face.

‘Ofakilevuka (‘Ofa) Guttenbeil-Likiliki is Director of the Women & Children Crisis Centre (WCCC) in Tonga, a women’s rights activist and a filmmaker.