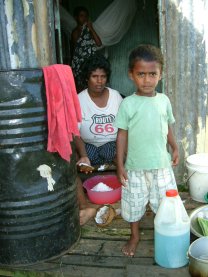 With an increase in urban squatter settlements, rising youth unemployment, poor education, rising inequality, and islands impacted by climate change, life must be getting worse for many islanders. The mixed record of the Pacific Islands in relation to the MDGs would appear to endorse this. The poor living conditions evident in the likes of Betio, Ebeye, over the borrow pits in Funafuti, in Jenrok village Majuro, and in the informal settlements of Honiara, Port Moresby and Suva also attest to worsening livelihoods (see Charles Yala and Satish Chand’s work on living conditions here [pdf]).

To the outsider, the foreign academic and aid worker, increasing poverty appears to be an important issue. But it can be surprising how poverty may not be as readily apparent to islanders (for poverty read hardship and for poverty reduction read alleviation). I will never forget my first visit to Kwajelein Atoll and the contrast between the apparently happy Marshallese living on densely populated Ebeye Island and the rather unhappy Americans who lived in comparative luxury next door on Kwajelein Island. Do islanders, who may be considered by others to be living in poverty, actually know or mind? Increasing incidents of crime and wider civil disorder would appear to confirm that they do.

Do any of you remember the era of poverty reduction in the Pacific? For me it started some time in 1999 when President Chino of the Asian Development Bank gave a speech that included a statement that ADB was all about reducing poverty. With the rest of the aid world watching and similarly committed to poverty reduction at that time, ADB staff and management were then directed to prepare a new corporate strategy. The resulting document included the desire to help all Asian and Pacific developing member countries create their own poverty reduction strategies.

Much other activity included research, training, new poverty trust funds, a $1 million international forum and, more generally the overall pursuit of a greater clarity of purpose. In 2000 ADB created a four person Poverty Reduction Unit to implement the new strategy and I was invited to join it.

Professional staff and management, especially those engaged in operations, were concerned to know if they and their professions were still employable in the era of poverty reduction. This was a time of great reflection. It was a great time to be focused on the poor and on development. It lasted for about 6 years.

For me there were 3 lasting impressions. First of I learnt that there is poverty in the Pacific, though others denied it at the time. And the situation is getting worse. Secondly, I was reminded of the great importance of participation in development. , Through participation, the poor could tell their decision makers in government exactly what to do and these priorities of the poor were and are quite consistent across the countries of the Pacific. Lastly, however, I became concerned over our apparent inability to do all that much to help reduce poverty.

Poverty exists in the Pacific, though twelve years ago few governments accepted this. The sometimes isolated public leadership and executive were invited at the time to recognize and learn about poverty, or “hardship” as many preferred to call it. Though difficult to accept, hardship and poverty exist within the cultures of the Pacific. Not only that, but they are extensive and growing. Our figures are now quite out of date, and they weren’t all that reliable at the time, but in 2004 David Abbott and I estimated that national poverty incidence ranged from about 20% in the Cook Islands to 50% in Kiribati. We also concluded that Pacific societies appeared to be rather less equal than those of Asia, though we also noted that poverty in the Pacific is rarely absolute or extreme (you can find the report here [pdf]).

In studying poverty and hardship in the Pacific we took a very conscious decision right from the beginning of the work not only to measure it but to also use the peoples’ voices to bring about a better understanding of the issues. These participatory efforts were well received in every island country. Such exercises can improve ownership and commitment for change and bring forward better development directions. Done in an accountable and transparent manner, participation can also help spread better governance. When policy-focused party political systems are yet to emerge from the politics of personality, family and clan, and when most of the knowledge of government and investment is locked up in the hands of the few on the main island or centre, participation can open the door to more inclusive development.

Participatory poverty assessments were completed in 10 Pacific island countries. The priorities of the people were consistent across them all. They were threefold: (i) to improve access to, and delivery of, essential social services, especially primary education and primary health care; (ii) to improve access to employment and other economic opportunities; and (iii) to improve standards of governance. Participation showed governments and donors not only what to do but also how to derive development priorities. You might notice that these priorities verify the conclusions of my earlier blogs.

So the poor react to poverty. They can also prioritize solutions. Academics may measure and donors may program responses. But have island governments and others in society managed actually to reduce poverty? There are exceptions but as I look back over the past 12 years I feel great unease over what I have witnessed. I fear that so much has been forgotten or ignored. Donors talk very little these days about poverty and hardship in the Pacific. And on the whole I do not believe governments have adopted the right approach. This will be the subject of my next blog.

In this fourth of a series (collected together here), Steve shares some of his personal development policy sojourns in the continuing interest of adopting better policies and institutions for a better future in the islands. The rest of the blog series is available here.