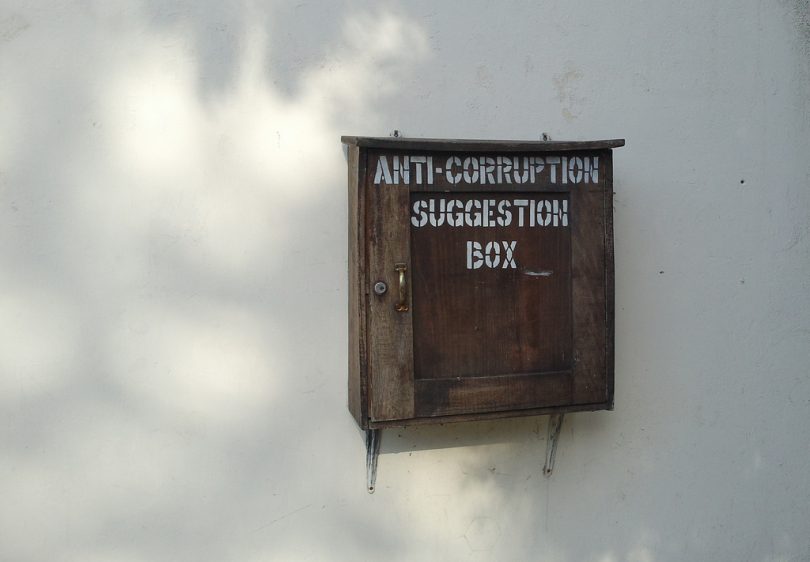 In Papua New Guinea, government responses to corruption have received a great deal of media attention over the past decade (see here and here). Despite this coverage, there is still much we don’t know about the state of the country’s anti-corruption agencies. Indeed, many struggle to provide the public with basic information about their activities. We could not obtain a copy of recent annual reports from the Ombudsman Commission, despite a request[i] (frustratingly, you can view the covers but not the content of recent annual reports here).

To address this knowledge gap, our recent Development Policy Centre Discussion Paper tracks ten years of budgetary allocations and spending on key anti-corruption agencies: the Ombudsman Commission, the National Fraud and Anti-corruption Directorate, Taskforce Sweep, the Auditor-General’s Office and the Financial Intelligence Unit. In this blog we examine one of the three research questions we answer in the paper, namely: how have allocations for and spending on anti-corruption organisations changed over time? By comparing budgetary allocations and actual spending, we highlight the degree to which governments have fulfilled their budgetary promises.

PNG’s Ombudsman Commission is one of the few agencies in our analysis where budgeted and actual spending have mostly been in sync – that was the case until 2015 when allocations outstripped spending (Figure 1). Budgetary allocations for 2017 suggest the organisation’s funding will decline even more; on current projections the organisation will end the decade in the same financial position it was at the beginning. 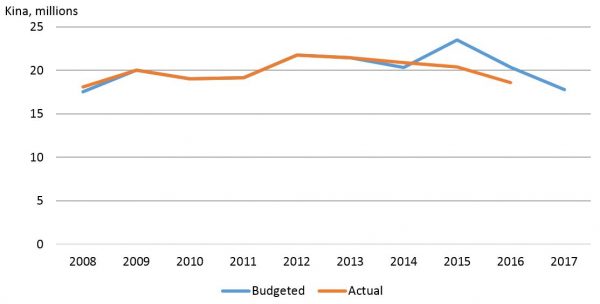 Located with PNG’s police department, the National Fraud and Anti-Corruption Directorate (Fraud Squad) plays a significant role in fighting corruption. Figure 2 demonstrates that spending on the Fraud Squad, despite its role in attempting to arrest the Prime Minister Peter O’Neill and other senior ministers, increased between 2008 and 2015. Yet there has been significant variation. Between 2011 and 2015 there were large gaps between allocations and spending, although the gap has been declining. Reduced spending in 2012 and 2013 is likely due in part to resources being reallocated to Taskforce Sweep, which was established in 2011. Budget allocations declined by 23 per cent between 2016 and 2017.

The third anti-corruption agency we examine is the Financial Intelligence Unit (FIU) – now known as the Financial Analysis and Supervision Unit – an agency with a mandate to investigate money laundering and terrorist financing. At the time the 2015 budget was announced, the media made much of the fact that the FIU was allocated less than the police band’s budget. Our analysis (Table 1) shows the difference in spending between these organisations was even worse. In 2015, in real kina 1.07 million kina was spent on the PNG police band and the FIU received 264,364 kina – so the police band received almost four times more than the FIU. For the two years data is available (2014 and 2015), spending on the FIU was less than half of allocations.

The Auditor-General’s Office is tasked with inspecting, auditing and reporting on accounts, finances and properties of government departments, agencies, and public corporations. Figure 3 shows that in 2012 the agency’s allocation rose above spending, and 2013 spending rose above allocations. By 2015, spending had declined to 21 million kina, and then increased slightly in 2016 to 22.3 million kina. However, funding is set to decline, with allocations reducing to 16 million kina by 2017; in real kina this is less than the agency was allocated at the start of the decade.

Figure 4 depicts the PNG government’s budgeted and actual spending on the short-lived but relatively successful Taskforce Sweep and the yet to be established Independent Commission Against Corruption (ICAC). After Taskforce Sweep’s role in the attempted arrest of Prime Minister Peter O’Neill, spending slumped sharply to 5 million and zero kina in 2015 and 2016 respectively. However, the amounts reportedly spent are far lower than allocations. While the O’Neill-Namah government quickly spent 7.5 million kina (non-budgeted) on the agency in 2011, since then the difference between allocated and actual spending has been significant. Just under one million (real) kina was allocated for the yet to be established ICAC in 2017. Thus, our analysis shows that the meteoric rise and fall of Taskforce Sweep was accompanied by unfulfilled spending promises.

To get a sense of the relative spending on each organization, Figure 5 compares actual spending over time (and allocations where spending data is not yet available) of each of these organisations. It shows that out of the agencies we examine, the Ombudsman Commission and Auditor-General’s Office are by far the most heavily funded. Traditionally, more has been spent on the latter than the former, although in 2017 this appears set to change, with the Auditor-General’s Office facing severe funding cuts. In comparison, other agencies receive paltry sums. 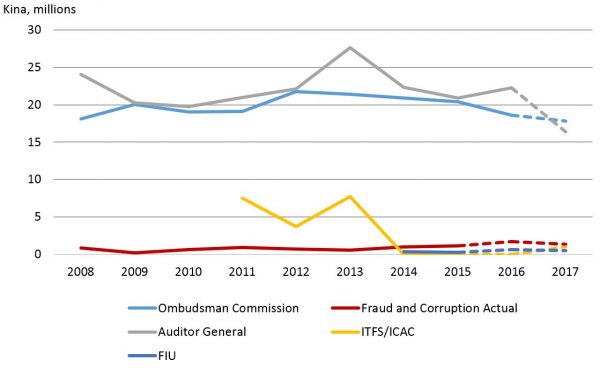 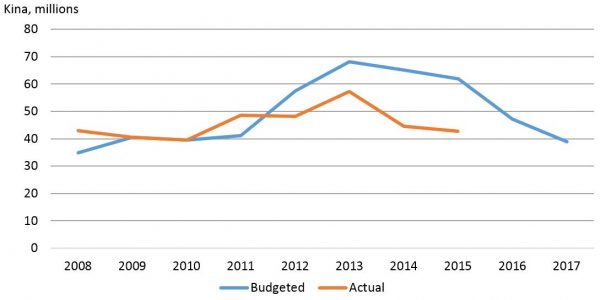 Amidst calls for the new government to establish an ICAC, these findings suggest anti-corruption activists and policy makers should be pressuring the PNG government to close the gap between budget promises (allocations) and actual spending. In addition, greater efforts are needed to ensure that spending on existing anti-corruption agencies does not continue to fall.

Grant Walton is a Research Fellow and Husnia Hushang is a Program Officer with the Development Policy Centre. This blog is based on the Development Policy Centre Discussion paper, ‘Promises, Promises: A Decade of Allocations for and Spending on Anti-Corruption in Papua New Guinea’ available here. Calculations for graphs and tables can be found here.

[i] We understand that it is now possible to get a hardcopy of recent annual reports from the Ombudsman Commission’s office.