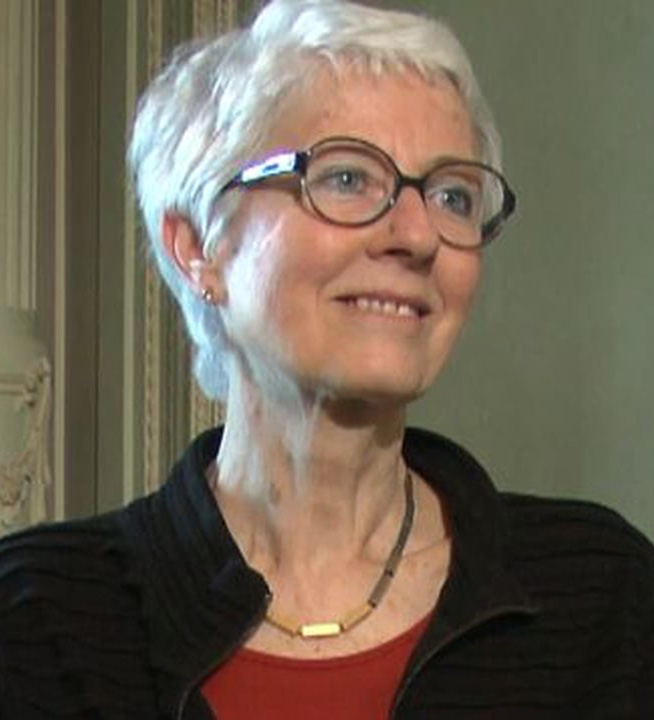 In a move that anticipated the universal, ‘one world’ character of the Sustainable Development Goals, the concept of a global public good was ushered into the international development arena around the turn of this century by the German economist Inge Kaul and various of her colleagues. It was an abstruse and surprising hit.[1]

Variations on the concept have subsequently found their way into most donor countries’ aid policy narratives. Aid doesn’t just relieve the suffering of individuals and help countries to develop; now it usually also contributes to the production of global public goods, most notably in the health and environmental arenas.

Why has aid been assigned this extra and nebulous-sounding duty, and why is it so conspicuous in public communications about aid? Kaul herself never advocated for this outcome; she believes that the financing and production of global public goods should be separated from the Official Development Assistance (ODA) enterprise for both conceptual and practical reasons. Nevertheless, donor agencies have thoroughly appropriated the concept of a global public good.

In a new Development Policy Centre Discussion Paper, I explore how the concept of a global public good is actually used in aid policy narratives and suggest how it might be deployed to greater effect. I also release, annexed to the paper, the full transcript of an interview I conducted with Kaul in May 2015.[2] A two-part podcast version of that interview is available here and here.

The cloak of universal benefits

The concept of a global public good, I argue, is not needed in order to emphasise mutual benefits or deal with mismatches between priorities for public investment as perceived by donors and by recipients. Rather, it is thought to be useful because it implies universal benefits, a large majority of which will flow to developing countries owing to their sheer weight in the world’s population.

This implied universality of benefits allows the concept to be used in what is often a partial and self-serving way in aid policy narratives, essentially as a euphemism for ‘solutions to transboundary problems of particular concern to donor countries’. Donor-country politicians don’t often talk about drugs and diagnostics for neglected tropical diseases when making the domestic case for aid; they talk about terrorism, climate change, irregular migration and pandemics.

While each donor country tends to invoke the same shortlist of big-ticket challenges, actual resource allocations will not necessarily favour the challenges that are most pressing from either a global or a development perspective. Figure 1 illustrates the point. It charts the proportion of global aid falling into various sectors with clear relevance for the production of global public goods, comparing the 2003-05 average with the 2013-15 average. 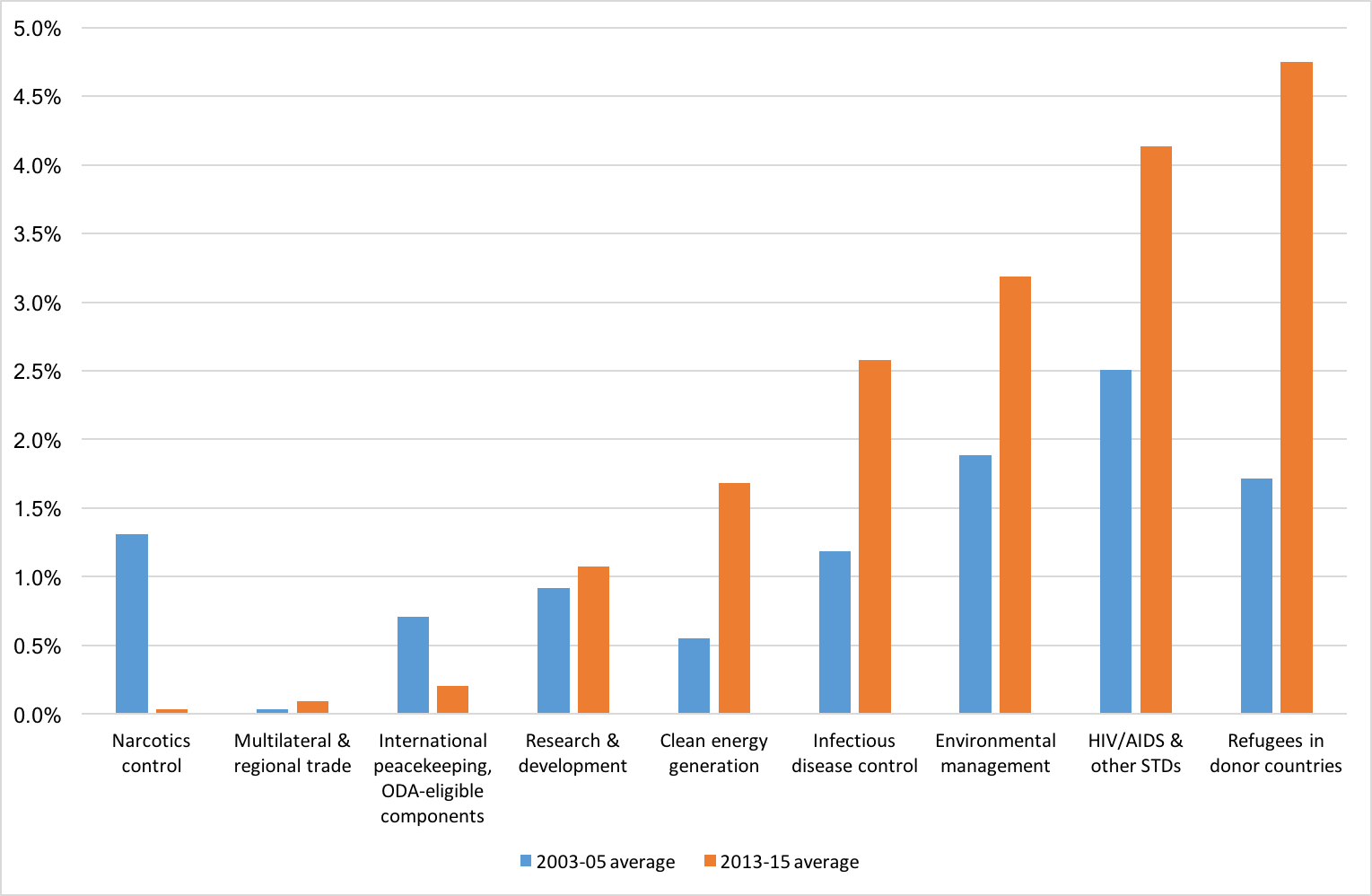 At both the beginning and end of the decade in question, funding for HIV/AIDS is very much higher than funding for infectious diseases in general, reflecting the fact that HIV/AIDS was and is of much greater domestic concern to donor countries. At the beginning of the decade, funding for narcotics control, another developed-country preoccupation, easily exceeded funding for several arguably much higher priorities: peacekeeping, research and development and clean energy. And funding for refugees and asylum-seekers in donor countries, or rather that portion of it which is ODA-eligible, accounts for three times more aid in percentage terms than it did a decade ago and now towers over most other categories of funding related to global public goods.[4]

Aid in the service of global public goods

Kaul’s view, and not only hers, is that aid has no place in the financing of global public goods—except where an investment delivers both local and global benefits and aid is one element of the financing mix owing to the local benefits.

The strongest argument for that view is based on opportunity cost.[5] How far I perceive something as beneficial to me depends on what else I think I need. From the perspective of Indonesia or Guyana, for example, it’s probably not so exciting that developed countries have put US$10 billions of mostly aid funds into the Green Climate Fund. They might instead have agreed on cap-and-trade arrangements that would have (a) allowed the same $10 billion to be used for more traditional development purposes, and (b) created opportunities for developing countries to benefit from the sale of cheaply-produced carbon credits into developed-country compliance markets.

To this it might be objected that many ‘provider’ countries in the middle-income bracket have considerable means and should be expected to bear some of the costs of providing global public goods. Indeed, in the case of climate change mitigation, many countries, including some poorer ones, are quite willing to do so, though willing to do more with external assistance. It might further be objected that provider countries need what is often called ‘readiness’ aid so that they have the practical capacity to respond to demand.

Both objections are valid. It is difficult to maintain that there is no role at all for aid in supporting action, beyond action that produces only local benefits, on climate change mitigation and other pervasive global public goods in developing countries.

But the essence of Kaul’s point remains: there must be, somewhere, a point beyond which the use of aid becomes excessive and other resources should come into play. Once we pass that point, we are using aid because it is there, not because its use is justified.

For the production of public goods that are global in their benefits, which would include for example both climate change mitigation and solutions to the emerging problem of antimicrobial resistance, the role of aid will always be relatively marginal. So it might be concluded that there is no legitimate reason to give prominence to global public goods in aid policy narratives.

I think Kaul is bound to accept that conclusion, but I don’t. That’s because I think there is a specific class of global public goods for which the use of aid on a considerable scale is appropriate. These are global public goods that benefit defined groups of countries or people rather than the whole world.

That might sound paradoxical but, as noted near the beginning, a public good isn’t always public by virtue of the membership of its beneficiary class. Sometimes it is made public by fiat, meaning that some entity, most often a government, has determined as a matter of policy that it will be made available to some defined group of beneficiaries on what amounts to an entitlement basis.

The class of policy-based public goods is not limited to the national level. If we consider the topical case of refugee resettlement, one could imagine a global regime complete with international burden-sharing arrangements which guarantees resettlement places to all bona fide refugees. It would be wrong to deny that this (fantastically unlikely) regime is a global public good simply because it benefits a defined group. It is a global public good owing to the nature of the public policy commitments that underpin it.

Global public policy commitments, like the one imagined above, involve the elimination of global ‘bads’—it’s effectively a matter of declaring them global public enemies. Such commitments have a ‘whatever it takes’ character; they are not merely process- or input-based. They also come with credible means of implementation—which, by the way, rules out broad-brush commitments of the ‘we’ll end poverty in our time’ variety.

In reality, no major global public goods important for development have been the subject of truly open-ended, whatever-it-takes commitments with credible means of implementation attached. But there are certain areas in which the donor community has made particularly sweeping commitments that do verge on this. One example at present is polio eradication; another, from the 1970s, is control of river blindness.

If donors were to focus attention primarily on global public goods that correspond to realistic, ‘aidable’ global public policy commitments—where the latter effectively put a price on the head of the corresponding ‘bads’—the concept of a global public good would play a clearer and more distinctive role in aid policy narratives than it now does.

It’s questionable how much public support for aid is really assisted by slyly gesturing at, and exaggerating, the reflexive benefits of spending aid in the margins of action on pervasive problems like climate change and irregular migration. It’s quite possible that if it were used rather to signal firm, realistic and outcome-oriented elimination commitments in connection with more circumscribed problems, the concept of a global public good could actually do more work than it does now within aid policy narratives to buttress public support.

[1] Without resorting to textbook language, a public good can be described as one that, within some reasonably broad consumer domain, is available with no limitation as to who can consume it (everybody in the relevant domain is free to take a bite) and as to how much of it they can consume (nobody’s bite precludes anybody else’s). A good might be inherently public, like the light from a lighthouse, or it might have been made so by fiat, as in the case of unemployment benefits. National public goods, such as defence, are usually provided by governments. Global public goods, such as the mitigation of climate change, cannot usually be provided by single governments; international cooperation is almost always required.

[2] Dr Inge Kaul is an Adjunct Professor at the Hertie School of Governance in Berlin. She was the first director of UNDP’s Human Development Report Office from 1989 to 1994 and subsequently director of UNDP’s Office of Development Studies from 1995 to 2005. She is the author of numerous publications on international public economics and finance and was lead editor of the books Global Public Goods; International Cooperation in the 21st Century (1999), Providing Global Public Goods; Managing Globalization (2003) and The New Public Finance; Responding to Global Challenges (2006). Most recently, she edited the book Global Public Goods (2016), a collection of the most significant articles and essays on the topic for which she wrote this comprehensive literature survey. A highly abbreviated transcript of the same interview, which was conducted for the Geneva-based Graduate Institute of International and Development Studies and published in June 2015, can be found here.

[3] Derived from OECD aid statistics, as most recently updated in December 2016, and author calculations. The sector categories used are in most cases the author’s aggregates of narrower categories used by the OECD’s Creditor Reporting System. Funding in each category includes bilateral funding from OECD donors and some non-OECD donors, and funding from multilateral agencies.

[4] Aid across the categories used in Figure 1 accounted for about 11% of all aid in 2003-05 (US$11.3 billion in constant 2014 prices), rising to about 18% in 2013-15 (US$31.4 billion in the same prices). If we look more narrowly at the change from the single year 2005 to the single year 2015, the share of aid in these categories almost doubled over the decade, to nearly 20%. In other words, the appeal to global public goods is not merely a rhetorical one; it reflects a very real shift in the allocation of resources.

[5] Another argument, that funding for global public goods might displace funding for more traditional development purposes, is weaker. One can always call for more aid. And the strong growth in global aid over the past 15 years or so, 82% in real terms from 2000 to 2015, has been driven in part by a growth in allocations corresponding to various global public goods.