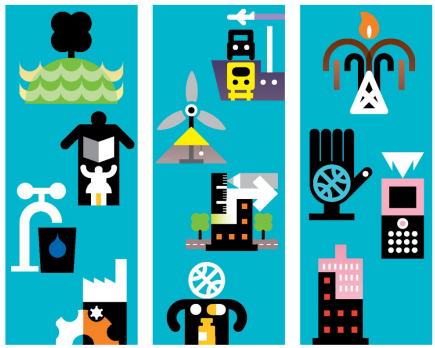 “This is the age of the Wizard of Oz. In the end you get behind the curtain … and there’s this tiny frightened figure. I think every Prime Minister has said this since Blair. You get there and you pull the lever, and nothing happens.”

Rory Stewart, The Guardian “The Secret of Modern Britain is there is no power anywhere” 3.1.14

I think Rory Stewart’s comment lies at the heart of what ‘delivery units’ are trying to achieve – a direct connection between political leaders, the policies they initiate and delivery of those policies at the grassroots level. Politicians want results fast – in short they want the lever that works. Delivery units appear to offer a potential solution.

The first delivery unit was initiated in 2001 by Tony Blair as the UK Prime Minister’s Delivery Unit (PMDU). It sat outside the line ministry structure, was accountable directly to Blair and had a small number of key staff – a mixture of private sector and bright, upcoming civil servants.

The PMDU relentlessly monitored line ministries’ implementation of national policies – pressuring them into real actions, not just talk. They analysed data frequently, using a traffic light system to show if ministries were on target, and, most importantly, reported directly to Blair in monthly meetings that were not filtered by self-interested ministers and civil servants. The initiative spawned similar units in Australia, Malaysia and the USA.

But can they help education systems in developing contexts?

More recently, delivery units have been tested in the education systems of at least two developing countries – Pakistan (Punjab province, where it is known as the Roadmap) and Tanzania.

In both cases delivery units have been used to inject urgency into the pace of educational change – results are looked for in weeks and months, not years. In Punjab, Sir Michael Barber’s team (Barber was the first PMDU Head) has worked with Shabhaz Sharif, the Chief Minister, intensively and frequently. Monthly “stocktakes” involving the Roadmap team and Sharif’s senior officials review a series of key metrics (teacher attendance, enrolment, facilities, etc.) to gauge trajectory towards targets. Consistently off target districts find their leadership replaced. Sharif takes a close personal interest, calls district officials directly for explanations and makes it clear the Roadmap is backed by his personal authority.

In Tanzania, President Kikwete’s personal authority backs the six ministries who have set up Ministerial Delivery Units. The Ministry of Education targets are to significantly improve primary and secondary school pass rates in key exams. The delivery unit sits outside the line management structure and comprises secondees from the private sector alongside senior civil servants.

Both initiatives rely heavily on derived political authority – Sharif in Punjab, President Kikwete and the Minister of Education in Tanzania. Aligning the initiatives with existing power structures is a shrewd move: on the face of it this is the holy grail of development – political will combined with technical focus. But, politicians are fickle, moveable and largely interested in satisfying their power constituencies. Can this political will translate into lasting change in the way education systems are run?

Both initiatives rely heavily on high quality, timely data, analysed quickly and delivered in sound bites. Both rely on a transparent communication strategy to keep the public on board. Both also rely heavily on a sense of urgency – things must be fixed, and quick! These factors are not typical in developing country systems – can delivery units change that?

It’s too early to gauge success in Tanzania – the initiative was only launched mid-2013 – but in Pakistan, Barber claims significant progress in just two years of Roadmap operation, including an increase in enrolment of 1.5m children and student attendance and teacher presence increased by 10%.

A World Bank staff member, Das, raises doubts about these claims. He comments: “The evidence is consistent with continued improvements in school inputs, and potentially small changes in enrolment. On learning, we can’t say much at this point”.

So, although the jury is still out on this issue, it brings us back to a key question – do delivery units in education work best if focused on a very small number of technically simple issues, regardless of political difficulty, or could they also be effective on technically complex educational issues ? Going one step further:  if delivery units might be helpful in moving an education system from poor to adequate, could they also be a tool to move a system from adequate to excellent ? The diagram below provides a possible framework for considering these questions. 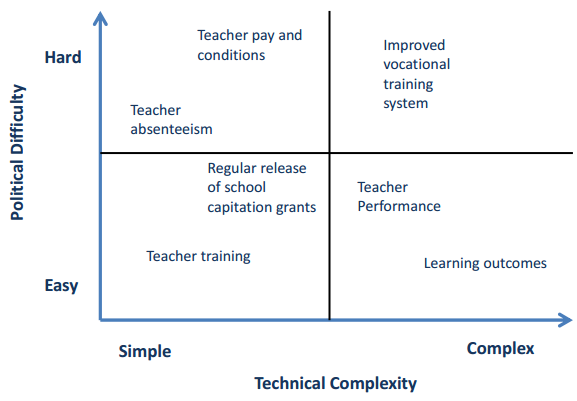 Overall, it would be easy to be critical, cynical or dismissive of delivery units – they are relatively untested in the dysfunctional, data poor contexts of developing countries. But, they complement the increasing focus on the results of aid and on how aid effectiveness is influenced by delivery – Jim Kim’s “science of implementation”. I believe delivery units in education – perhaps focused on a few technically simple barriers – could become an increasingly important development tool for governments focused on real education reform.

This blog post is based on Andy Brock’s presentation at the 2014 Australasian Aid and International Development Policy Workshop. His presentation and paper, which were co-written with Robin Todd and John Martin, are available here.