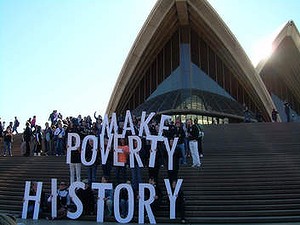 When they are surveyed, Australians appear to be supportive of aid work. A poll from 2009 [pdf] found, for example, that 86 per cent were in favour of the Australian government giving foreign aid. Yet beyond the presence of nominal, high-level support, little is known about the nature of their support for aid, or the types of Australian most favourable to giving. Are aid’s supporters predominantly wealthy? Or religious? Or educated? Or young? And is support coupled with particular political or ideological beliefs? Even less is known about the depth of the Australian public’s commitments to aid giving — the extent to which people are actually willing to support aid work when it comes at a cost.

It is these questions that we attempt to answer in the latest Devpolicy Discussion Paper. In the paper we combine two new datasets to learn more about Australians’ support for ODA (at the electorate level) alongside their actual private donations.

The first dataset is based on results from the Vote Compass survey run in conjunction with the 2013 Australian elections. The Vote Compass team provided us with the results for each electorate to the question “Australia should spend more on foreign aid” (available interactively here). Results were weighted to make them representative of the population. While the question isn’t perfect, it still allows us to make comparisons of levels of support between Australian electorates.

The second dataset focuses on the proportion of each electorate that made donations to a group of large Australian aid NGOs. Data was collected by ACFID, which we gathered from their website. This dataset is interesting as a gauge of the depth of opinion. It’s one thing to click a button on a website expressing your support for aid, but giving directly to an NGO involves a direct sacrifice, and therefore reflects depth of support. Obviously, the NGO data is also interesting for what it can tell us about the practicalities of NGO support.

A cursory glance at the data shows us that Australia is far from homogenous in its support for ODA or its giving to NGOs. For example, the chart below shows the proportion of five Australian electorates (including the highest and lowest extremes) who gave to aid NGOs in 2012. We see similar variance, albeit of slightly smaller magnitude, in surveyed support for ODA too.

Variance in proportion of electorate giving to aid NGOs 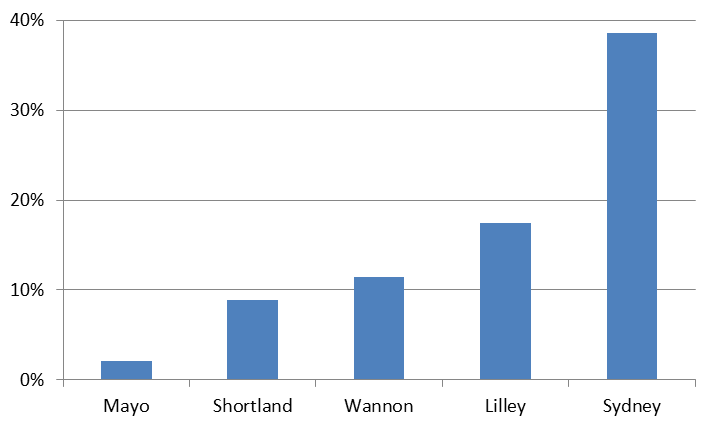 Note: Mayo and Sydney are the outliers in the dataset. The electorate average is 14%.

You can also view the datasets interactively:

Note: Average support for ODA ranges between 2.229 and 3.364. You can alternate between ‘support for ODA’ and ‘proportion of electorate donating to aid NGOs’ by clicking on the ‘visible layers’ legend.

We started by looking at the effect of wealth on support for government ODA. The chart below is a simple bivariate analysis that maps support for ODA against the proportion of the population earning over the median income. From the chart we can see a reasonably clear bivariate correlation: on average, wealthier electorates are home to more supporters of government ODA.

Income and support for ODA 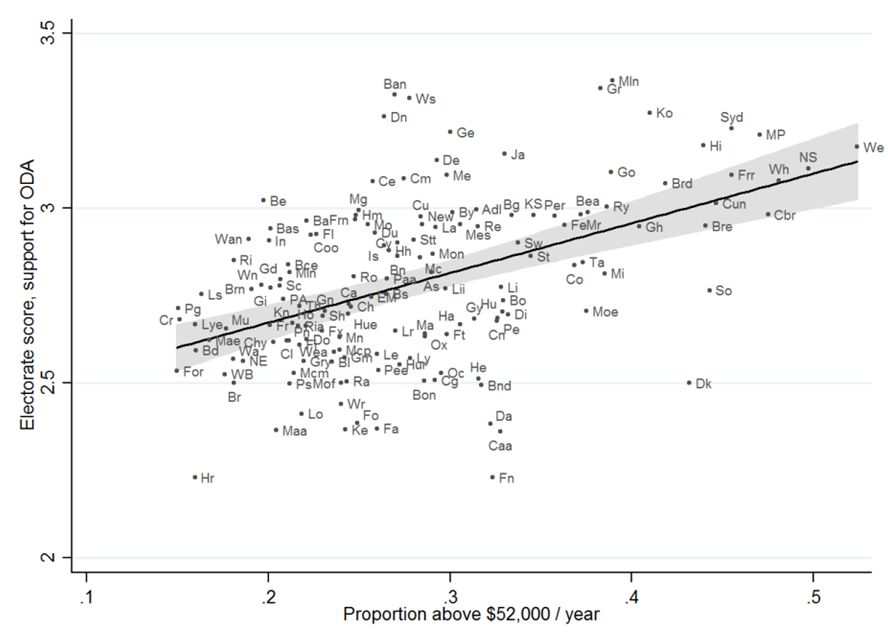 Note: Support for ODA is measured on a scale of 1 to 5 (1 being least supportive, 5 being most supportive). Regression results can be found in the discussion paper.

While the above is useful to know, it does not in itself explain support for ODA, since wealth is also correlated with other socio-economic factors, which may themselves be correlated both with income and ODA. Indeed, when we ran multiple regressions to control for this, we found education to be the variable most strongly correlated with support for ODA. When education’s effect is controlled, our results actually show that wealth’s direct impact on support for ODA is negative. Surprisingly, at the electorate level, religiosity also has a negative impact on support for ODA. Age and urbanisation, the two other variables we tested for, appear to have no discernible impact.

Turning to the impact of political preference on support for ODA, our results find a strong positive correlation between Greens support and support for ODA, with weaker positive and negative association for Labor and the Coalition respectively. The magnitude of this influence can be seen in the chart below. It shows on the Y axis, on the basis of our results, the increase in the average electorate level support for ODA score we would expect to see if education in an electorate doubled (while other variables stayed the same).

Magnitude of influence of political preference on support for ODA 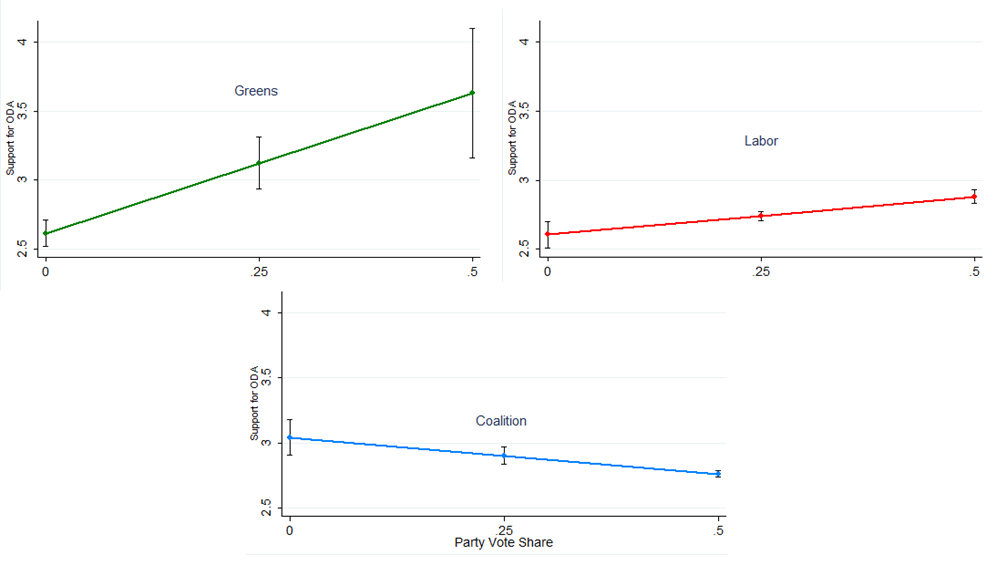 Note: Support for ODA is measured on a scale of 1 to 5 (1 being least supportive, 5 being most supportive). Party vote share is the proportion of an electorate listing each party as their ‘first preference’ in the 2013 Federal election.

When we paired out survey data on support for ODA with our data on NGOs, we found a clear correlation at the electorate level between ODA support and NGO donations. Electorates where support for ODA is high are also electorates where higher proportions of the population give to NGOs. So, to answer the title of our blog post, it appears that, by and large, Australians do indeed put their money where their mouths are.

Support for ODA and donations to NGOs 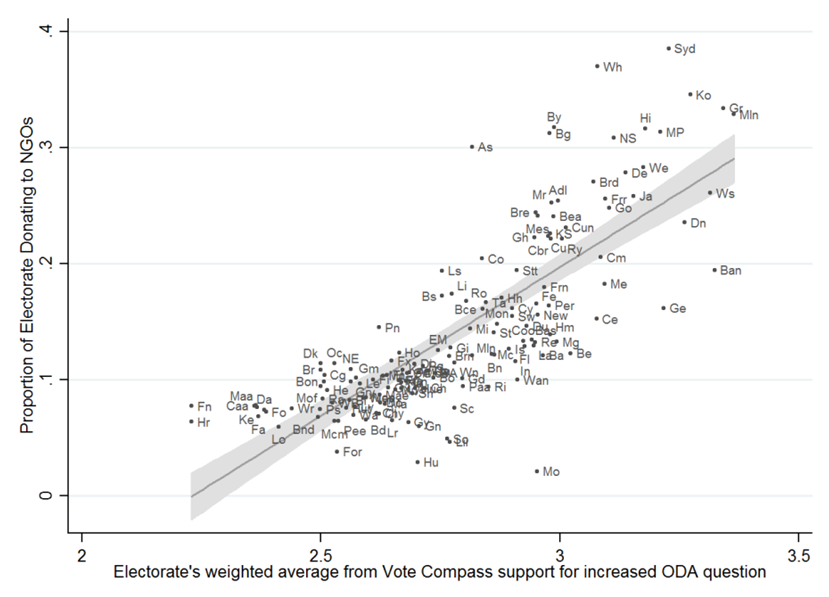 Reflecting this, we see similar results when looking at the determinants of donations to aid NGOs. Levels of education are again the key determinant of giving and, once this is controlled for income, has no significant impact while religion is again negatively correlated. There is also a strong positive relationship between Greens support and donations to NGOS. However, in the case of NGO donations, there is no statistically significant relationship between support for Labor or support for the Coalition and giving to NGOs.

Our research shows that, above all, levels of tertiary education are the strongest predictors of support both for ODA and actual NGOs donations. Greens party support is also a relatively strong predictor for both. A summary of the rest of our results can be found in the table below.

These results are only the start of a rich field of further research. Our study has been aggregated at the level of the electorate, not the individual, which could be done through surveys. We also don’t know much about the causal pathways present in the relationships above – why does tertiary education lead to more support for aid and NGOs? In future studies we plan to disaggregate combined groups, such as ‘religious’, to see if the effect we have found is driven by particular churches or other groups. We also plan to undertake experimental work on different ways of framing aid questions to see if they change or don’t change levels of support.

There is certainly more to be done, but we are off to a good start. Our research fills a void in empirical analysis on perceptions in Australian aid, and may also even have some practical utility: knowing where and who supports aid offers a sense of where to target fundraising endeavours and campaigning.

This research was presented in a public lecture at the ANU in early August. More details, including a podcast of the event and presentation slides, are available here.