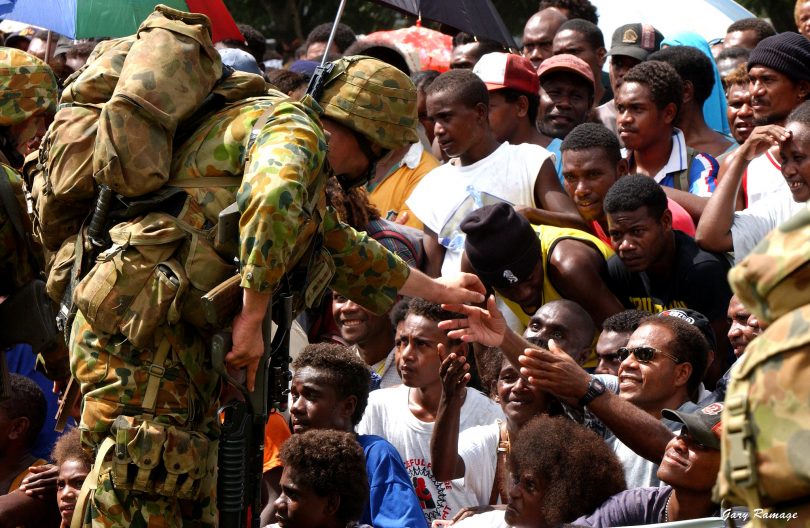 On 30 June this year, the Regional Assistance Mission to Solomon Islands (RAMSI) will come to an end after 14 years. RAMSI was deployed in mid-2003 at the invitation of a desperate Solomon Islands government following several years of conflict between armed militant groups, a collapse in law and order and in the state’s capacity to deliver services, and a disastrous decline in economic activity.

Although it was from the start a regional operation, from the first RAMSI was underwritten by Australian financial and human resources, costing Australian taxpayers AU$2.5 billion over its duration. Australian leadership and Australian thinking essentially determined RAMSI’s direction.

RAMSI was nothing if not ambitious. Then prime minister John Howard took the decision to mount an operation of such scale in the face of advice from Australian government departments and agencies, which continued to advocate an incremental and risk-averse approach until late in the day.

RAMSI was conceived, designed and operated as a broad and long-term state-building exercise, not simply as a security or peacekeeping operation. Apart from its military and policing components, it also included (at least until 2013) substantial civilian elements that operated in key areas of government such as the Ministry of Finance, the courts system and a range of public service agencies. At its height, RAMSI exercised unprecedented reach into, and control over, key aspects of the public sector in Solomon Islands.

RAMSI’s departure from Solomon Islands raises the question as to whether we are seeing the end of an era, or even a form of strategic retreat by Australia, following a period of activism and intervention.

Quite apart from its cost, RAMSI has certainly been a sobering lesson for Australia in the challenges and difficulties of state-building.

To be sure, the mission can point to many successes, including the restoration of law and order and of government finances in Solomon Islands. RAMSI will withdraw in June almost as popular with the general population as when it started — no small achievement compared to other interventions around the world.

Even so, that very popularity might also be taken as evidence that ordinary Solomon Islanders still have little trust and confidence in their own institutions. And this points to a broader issue: RAMSI has not changed the basic dynamics of Solomon Islands politics. Addressing the underlying drivers of the conflict that emerged in 1999 remains very much a work in progress.

Regionally, the picture in 2017 is very different from 2003 when RAMSI was launched. A number of Pacific island countries (notably Papua New Guinea and Fiji but also Solomon Islands itself) have become more diplomatically assertive and ambitious. External players such as China and Indonesia are vying for a greater role in the region. The regional diplomatic architecture has grown more complex with new organisations and regional and sub-regional groupings becoming more active.

This trend, described by some commentators as the ‘new Pacific diplomacy’, poses a range of challenges for Australian diplomacy in the region.

But it would be an over-reading to see the end of RAMSI as marking a retreat from Australia’s sense of regional leadership. Australia is not abandoning Solomon Islands, which will remain the recipient of a very large aid program from Australia including a large follow-on policing support program. Moreover, it recently emerged that Australia and Solomon Islands have been negotiating a ‘security treaty to enable operational assistance in the case of a major security crisis in the future’. While we are yet to see the terms of this treaty — it will presumably give Australia the discretion to determine whether to intervene or not — the willingness to contemplate a formal arrangement of this nature represents a strong reassertion of Australia’s continuing relevance in the region.

Such a bilateral agreement would be consistent with the forward-leaning language contained in the 2016 Defence White Paper, which restates Australia’s intention to remain the principal security partner for Pacific Island countries and indeed comes closer than earlier White Papers to declaring an Australian ‘Monroe Doctrine’ in the Pacific.

We are yet to see the 2017 Foreign Policy White Paper. But it is striking how regularly Australian Foreign Minister Julie Bishop uses the term ‘responsibility’ in describing Australia’s role in the Pacific. This is not the language of strategic retreat.

Declaratory policy is one thing, but the allocation of resources is another. Yet in these terms the current government has maintained and in some areas increased funding directed towards the region.

The Pacific was largely quarantined from the huge cuts to Australia’s aid program in 2015, and the government has launched a major new Pacific Maritime Security Program (PMSP) worth up to AU$2 billion over 30 years. Australia’s Prime Minister described the PMSP last year as ‘the centrepiece of Australia’s defence engagement in the South Pacific’. And recent Australian governments of both hues have promoted Australia’s Seasonal Worker Program for Pacific Islanders and increased Australia’s influence and reach in the region through deepened police cooperation.

While RAMSI may well have represented a particular high tide in terms of Australia’s role in the region, the end of RAMSI is more the end of a chapter than the end of a story. Natural disasters aside, it is not hard to envisage situations in which Australia may again seek to play a direct role in the affairs of a regional state. Don’t count on Australia walking away from the Pacific any time soon.

James Batley is a Distinguished Policy Fellow at the State, Society and Governance in Melanesia Program at The Australian National University. He served as Australian High Commissioner to Solomon Islands from 1997–1999 and as Special Coordinator of RAMSI from 2004–2006.

This post is republished from East Asia Forum, a platform for analysis and research on politics, economics, business, law, security, international relations and society relevant to public policy, centred on the Asia Pacific region.