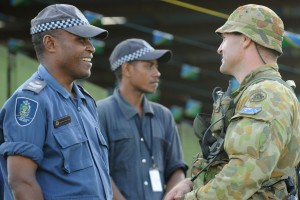 According to Sir Robert Peel, one of the principles of ethical policing is “impartial service to the law”. While most people would agree with this, recent events in Solomon Islands seem to indicate that the Royal Solomon Islands Police (RSIP) is gradually losing its grip on impartiality and public confidence.

The Regional Assistance Mission to Solomon Islands (RAMSI) has contributed positively towards strengthening the Royal Solomon Islands Police Force (RSIP) in the last ten years. However, “impartial service to the law” remains a challenge.

During the Solomon Islands’ “tension period” (1998 – 2003), the RSIP’s impartiality was drastically compromised because some police officers were perceived to have supported militant groups and some were allegedly involved in criminal and corrupt practices. This exacerbated the conflict because there was no longer a strong functioning state to protect citizens. This also led to a deterioration in people’s trust and confidence in the police.

Since the arrival of RAMSI in July 2003, the focus on building an effective policing service through training and the re-strengthening of structures and systems has put pressure on the RSIP to step up. Hence, the RSIP we have now has improved a lot compared to ten years ago, and the rule of law is now restored. But, as RAMSI scales down there are still concerns about police impartiality.

This became evident in two recent events involving the RSIP. The first event was a trip to Vanuatu by a group of police officers, funded by the Member of Parliament for West Honiara, Namson Tran, who has a court case pending against him. According to media reports, Tran forked out SBD$110,000 from his constituency fund to pay for the police officers’ trip to Port Vila.

The local media reported that when the acting Commissioner of Police, Juanita Matanga, was asked about the assistance from the West Honiara MP she said “there is nothing wrong about the funding” and “she does not see any conflict of interest arising from the assistance”. The acting Commissioner of Police later claimed she did not make these statements – that the media made them up, but the media’s response to this is that “We’ve recorded everything she said”.

The acting Commissioner of Police and the RSIP Executive then claimed that they had no prior knowledge of the assistance from Tran and denied having approved the request for funding. They said the arrangement was facilitated by the Police Social Soccer Club Committee, which is independent from the Office of the Commissioner and RSIP Executive.

While the acting Commissioner of Police claimed that she did not play any role in acquiring the funds from the West Honiara MP, it was clear from her previous statements in the media that she at least knew about the police officers’ trip to Vanuatu and the reasons for the trip. The fact that the acting Commissioner of Police and the RSIP Executive failed to make a decision to stop a politician from funding the trip indicates that there is still a lot that needs to be done to ensure the RSIP maintains impartiality and a high level of professionalism.

Worse still, from media reports, it appears the police trip to Vanuatu was not only as a social soccer club, but also as official representatives of the RSIP. The fact that a politician has used constituency funds to pay for this trip gives the impression that police officers have formed clientelist relationships with some politicians. This fuels public perceptions that the RSIP is not impartial and cannot be trusted.

Overseas trips by police officers are state responsibilities and should have been budgeted for by the government. The failure to do so indicates that the state is unable to adequately manage its budget to cater for police operations, capacity and welfare. Also, the fact that the Police Social Soccer Club Committee solicited funds from a politician who has a court case pending against him and the acting Police Commissioner and RSIP Executive did not stop it, demonstrates that the RSIP’s operational culture could easily be subverted by other interests that do not promote police impartiality.

The second concerning event was the reinstatement of Walter Kola as Deputy Police Commissioner. Kola had been suspended pending investigations into allegations of malpractice, but was reinstated in July 2013. In the wake of this there were public expressions of concern that Kola’s case was not thoroughly investigated by an independent body, and that he might have not been appropriately reprimanded.

Interestingly, the police officers’ trip to Vanuatu was led by “Kola and the assistant acting Commissioner Simson Bugeva.” The fact that Kola is the Deputy Police Commissioner and a RSIP Executive is further evidence that the Executive knew about and participated in the trip. Kola should have known that accepting funds from the MP for West Honiara would have negative impacts on the public’s perceptions of the RSIP, especially its impartial service to the law.

The police trip to Vanuatu and Kola’s reappointment as the Deputy Police Commissioner were recent events that continue to shape public perceptions about the RSIP. These events bring into question the professionalism and impartiality of the RSIP, especially the level of independence in investigating issues involving top/senior ranking police officers, government officials, politicians, businessmen and other prominent individuals in Solomon Islands.

Public trust and confidence in the RSIP as well as its legitimacy can only be maintained and sustained – now that RAMSI is in transition – if RSIP demonstrates a high level of professionalism and impartiality both at the organisational and operational level. Based on recent events, this will be a major challenge in coming years.

Joseph D. Foukona is a law lecturer at the University of the South Pacific. He is from Solomon Islands and currently a PhD student at ANU studying land issues and reform.

Joseph D. Foukona is a law lecturer at the University of the South Pacific. He is from Solomon Islands and currently a PhD student at ANU studying land issues and reform.