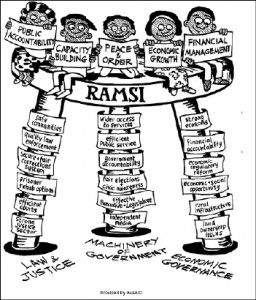 Living in Island cultures requires understanding multiple perspectives and the nuances of life. Like seeing life through binoculars the other way around, things so near are yet so far.

RAMSI has given Solomon Islanders a glimpse of how things ought to be. It is unclear if this was one of its original objectives. If it was then RAMSI was an attempt to influence our politics, and this is understandable as it is in politics that leaders have failed Solomon Islands. Yet as an attempt it has mostly been unsuccessful.

This was again in evidence recently when the government announced that the SBD$33m (approx. $A4,893,000) previously budgeted by parliament for the Ministry for Agriculture and Livestock for cocoa and coconut planting and rehabilitation, was now to be channeled to Members of Parliament to seed development in their constituencies. If RAMSI could not steer successive parliaments and leaders to using the institutions of government properly, then it has failed.

Was it in the design or the implementation of RAMSI that something was overlooked? Aussies shouldn’t feel that we are ungrateful. We wanted RAMSI to succeed. Now however, I believe that until something creative and strategic is done, we can expect further turbulence in Solomon Islands.

Discussions continue among Solomon Islanders about RAMSI, its departure and its legacies and I am sure many agree that the experience raised hopes and created high expectations of better things, for example, that government institutions and leaders would sustain the changes RAMSI tried to bring about. And better things are possible: the professional Solomon Islander is as adept as any other professional in the world.

Yet our country has a number of unique problems not found in Australia or New Zealand, from whence most RAMSI advisors came. Here, because of the colonial experience as well as experiences with logging and casinos that have contributed to major fractures in the body politic as well as the social fabric, many people, including national leaders, see government as a garden of opportunities to harvest as they see beneficial for themselves and their voters. And the country wants for a majority of visionary and courageous leaders to provide the space, the resources and the authority to effect change.

Such challenges are not insurmountable and RAMSI could have aided the country in overcoming them. Yet this hasn’t happened and is unlikely to happen because – I believe – RAMSI was built on misunderstandings of how to impact and influence Solomon Island culture. What was needed was critical analysis of what influences culture followed by a scrum-like drive with cabinet in the front row running interference with RAMSI personnel embedded in a reinvigorated system of government.

Instead RAMSI became an administration that paralleled SIG but had superior resourcing – both in finance and human resources. And only in a few instances was it able to demonstrate good governance of the structures in place. Solomon Island institutions are fixed in post-colonial structures and culture and RAMSI was unable to get ‘under the skin’. Instead it showed up and amplified the weaknesses of government to the point that many Solomon Islanders distrust government more today than before, which is why many people are nervous about the impending departure of RAMSI.

If RAMSI was meant to help restructure government at arm’s length (i.e. not becoming involved in politics), then it was mission impossible! It could have significantly influenced political administrations (Kemakeza, Sogavare, Rini, Sogavare, Sikua, Philip and Lilo) – Kemakeza more than the others – but it largely remained on the sidelines funding repairs and renovations and generally working according to its own priorities. When it did venture into politics – as in the Castles and the Julian Moti case – it stumbled on sensibilities it had not expected. It missed significant opportunities by doing little concrete work in its first four years while PM Kemakeza was amenable to new options. Instead RAMSI sent in staff with older conceptions of what was going on, while a younger group tried to analyse the situation they found. They lost four years and a lot of taxpayer funds doing this.

A number of advisors in key roles preferred to listen to experts in Canberra than take advice from local professionals. An example was the Sikua administration waiting on the Electoral Commission to come up with proposals for a new electoral system. Too late it found that the RAMSI advisors disagreed with government policy and only strengthened the existing system. Also academic political advisors in Canberra sided with naysayers to scupper PM Sikua’s plans to stabilize government which contributed to Sikua losing influence and government.

A better way would have been to emulate the work of former Victorian Premier Steve Bracks. Upon his retirement from Victorian politics he was personally asked by the East Timorese President (who was recovering in a Melbourne Hospital from gunshot wounds) to be his advisor. I met him at a workshop organized by former WA Premier Geoff Gallop in Sydney a few years ago. When asked what he did in Dili, Steve Bracks said he just showed them how to use the institutions of government. When reformers were in power in Honiara, rather than working at cross-purposes with them, RAMSI should have enabled them with the support of senior advisors. Yet this opportunity was missed.

Beyond politics, amidst the mechanisms of governance, RAMSI has worked hard on the younger generation but the controls of the institutions were in the hands of the generation before them. We need something substantial and it needs to come from within and be carried by the new professionals who can influence and/or become the new leaders. But because of the ineptitude of our leaders, it needs a starting point that our neighbours can provide.

Here a traditional development assistance approach can help: technical advisors actually working within the structures of government institutions to contribute to expected outcomes. Examples of successful interventions are in the Economic Reform Unit in the Ministry of Finance (which had people in line as well as advisory positions), and the Auditor General’s Office and the Internal Revenue Service where advisors held line positions. More of this could have broken the cycle of ineptitude and corruption that sadly still exists in the public service today. This is not new advice. When Australia and New Zealand sent in analysts before RAMSI arrived in mid-2003, they were told by civil society members that the best place to effect change from was in line positions of critical ministries.

Yet, more radical social change is also needed. I have advocated for more than a decade for driving an educational wedge between the predominant neo-colonial culture and mindset, and today’s market oriented paradigms, so as to propel Solomon Islands government and politics into the new realities. This could be done, I believe, by giving the next two or three generations of high achievers a solid metropolitan education experience. The proposal is for Australia and New Zealand to revise their education policies and each year take all SI’s year 5 and year 6 students achieving B+ passes to study in Australia and New Zealand to complete their high schooling and prepare for tertiary studies. The current Australian and NZ educational policies focus on in-country high schooling. By the time young adults leave local high schools, however, their world views are formed on the basis of local standards and perceptions.

Immersed in the metropolitan neighbourhood education systems they can learn how to perform to the expectations of the market economy as they forge careers in the globalised market place. And when they return to Solomon Islands, their influence on government will be substantial as they take control of the institutions when their turn arrives. This approach shapes people’s perspectives at a younger age.

These are the sorts of wide-ranging changes that are needed. Without them I believe that a major lesson learned is that stability, economic development and social progress cannot be imposed or cultivated by a mission of the RAMSI kind.