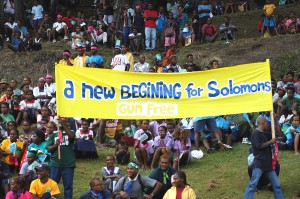 RAMSI’s current ‘transition’ has become the subject of intense deliberation among the Australian policy community. Much of this discussion revolves around the technical challenges of transitioning from one modality of external assistance to another, namely, from a post-conflict intervention aimed at stabilisation and recovery to a more regular bilateral aid engagement. However, the ‘RAMSI transition’ is not the only type of transition that is taking place in Solomons and we shouldn’t allow the short-term policy focus on managing RAMSI’s smooth exit to obscure what are arguably much larger and more significant transitional challenges facing Solomon Islands. In this post, we use the occasion of RAMSI’s transition to outline the multiple and inter-related transitions taking place in Solomons with a view to opening a wider dialogue about transition. In this regard, ANU’s State Society and Governance in Melanesia (SSGM) program will be holding a two-day workshop in early November to examine these issues in more detail.

Much has already been said about the ‘RAMSI transition’. The well-rehearsed Australian government position has been disseminated across a range of media, including in a recent SSGM Discussion Paper and a Development Policy Centre blog post. We might characterise this form of transition, and the discourse that accompanies it, as managerial and technocratic. It is primarily a ‘change management’ process; moving from one form of intervention to another. ‘Transition’ in this sense is by no means unique to Solomon Islands (nor, to be sure, are any of the other transitions discussed here) and has some similarities, as well differences, with the ‘exits’ playing out to varying degrees in other so-called ‘fragile’ settings, such as Liberia, Sierra Leone or Afghanistan.

Widening the frame beyond managing the transition in the development relationship between Solomon Islands’ and Australian governments, we see a large body of global experience on the circumstances under which conflict-affected and fragile states are most likely to achieve durable peace and stability. For example, the 2011 World Development Report (on conflict, security and development) highlighted the importance of restoring confidence and transforming the institutions that provide citizen security, justice and jobs. Elite settlements and credible signalling are also increasingly viewed as critical to successful transition from conflict and fragility. How has Solomon Islands fared in this comparative frame, and what can be learnt about possible post-RAMSI futures?

Another significant transition is currently underway in the Solomon Islands’ economy, with the shift in the export base from logging to mining. The Gold Ridge mine, which was shut down in 2000 as a consequence of militant activities on Guadalcanal, re-opened in 2011; and there is mineral prospecting and mine lease conversion taking place throughout the archipelago. Meanwhile Solomons long-suffering forests, for several decades the victims of a notorious alliance between politicians, local big-men and Malaysian logging companies, are nearing commercial exhaustion. The history of mining and conflict in Solomon Islands, as well as in neighbouring Bougainville and mainland PNG, suggests that the costs and benefits of Gold Ridge and future mining operations will have to be handled with great care. Is Solomon Islands transitioning from one form of ‘resource curse’ to another, and one likely to generate major stresses and divisions with potential for violent conflict? What are the political economy implications of this shift from logging to mining?

In addition to the shifting export base, Solomon Islands is also undergoing several of the deep structural changes that have characterised development in many other fragile contexts. While rates of urbanisation remain relatively low, Honiara has more residents than ever before, with the town boundaries spilling over into surrounding areas, much of which are under customary ownership. Colonial era infrastructure is totally inadequate to the needs of the expanding capital. Significant agrarian change is also taking place in some rural areas, especially in those where population densities are highest, such as on north Malaita, and where there is significant cash-crop production, such as on north Guadalcanal. What lessons can be learnt from comparative experience with these sorts of social and economic transitions?

In addition to structural and economic transitions occurring ‘above the state’, there are also transitions taking place ‘beneath the state’ in the local social orders that remain the primary reference point for most Solomon Islanders. Since the effective abolition of Area Councils in 1998, there has been no local level of elected government in Solomon Islands. The removal of this level occurred around the same time as the advent of constituency funds. In the larger context of the gradual withdrawal of state that has occurred during the postcolonial period, constituency funds, which have expanded dramatically in recent years, provide the only consistent linkage between national government and the rural communities where the bulk of the population live. As in PNG, the institution of discretionary funds has become fundamental to the way in which the Solomon Islands state actually works (as opposed to Weberian ideals as to how it should work) and how state-society relations are governed in practice.

Recently published research on Justice Delivered Locally in Solomon Islands [pdf] documents some of the transitions occurring ‘beneath the state’. These transitions taking place at the most local levels, including changing identities and allegiances, pervasive substance abuse and growing intergenerational stresses, remain barely visible from the vantage point of government and donor offices in Honiara. On a more positive note, the JDL report also identifies the efflorescence in experimentation with local and culturally meaningful forms of governance in different parts of the country as local leaders and community groups attempt to address some of many challenges they face in the absence of effective government engagement. While such experimentation inevitably yields many failures, it provides an important reminder of the largely unacknowledged resilience at local levels and the practical ways in which local actors are seeking to fill the void in state service provision, especially in areas such as safety and dispute resolution.

As we contemplate Solomon Islands’ future beyond RAMSI, it is critical that we do so in light of the full range of transitions underway – within the state, as well as above and beneath it – shifting away from a narrow concern with the technicalities of changing aid modalities to a more analytical focus on the implications of, and likely interaction between, these more profound transitions.

Matthew Allen is a Fellow at the Australian National University’s State Society and Governance in Melanesia Program. Sinclair Dinnen is a Senior Fellow in the same program.