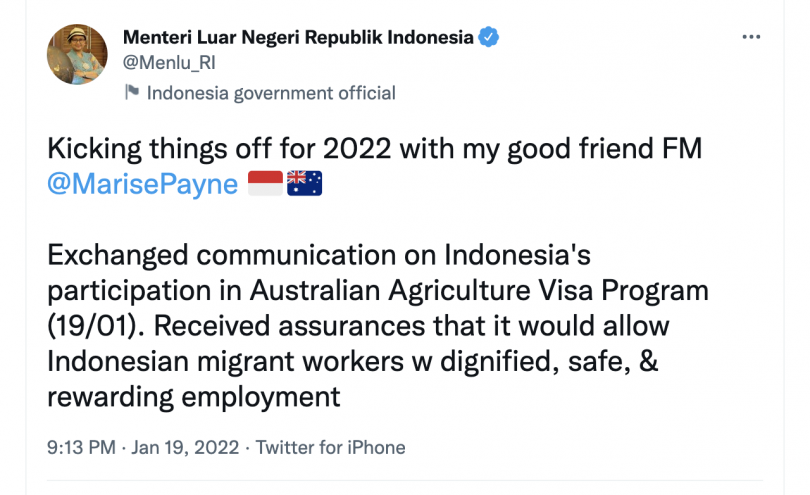 The last couple of months have seen a significant amount of information released on the new visa that will allow Asian workers to work on Australian farms and take other regional jobs. The so-called Australian Agriculture (AA) visa will compete with similar Pacific visas, formerly SWP and PLS, now referred to as the Pacific Australia Labour Mobility scheme or PALM.

First, in the Mid Year Economic and Fiscal Outlook, released in late December, we got our first hint of the number of workers that will be allowed in under the new visa. It takes a bit of arcane guess work, but the income tax revenue that the government thinks the new visa will generate (p.231), when combined with how much revenue it estimates will be generated by an extra 12,500 Pacific PALM workers it is targeting (p.236), gives us a sense of how many Asian workers will be allowed in. One has to guess how many of the AA and the PALM workers are seasonal (here for a few months and so on the 15% tax rate) and how many are temporary (here for up to four years and so on regular tax rates). I get a range of 8,000 to 16,000 Asian workers by 2023-24.

The Seasonal Worker Program (SWP) has been going since 2007. It took a decade for it to reach 8,000 visas. With the Pacific Labour Scheme (PLS), the combined PALM has now reached 20,000 but 8,000 to 16,000 spots going to Asia is going to make a big difference to the PALM latecomers, Papua New Guinea and Solomon Islands. They may well continue to be crowded out from meaningful participation in the PALM scheme.

Second, through various tweets and announcements, it has become clear that Australia is negotiating with four Asian countries. Indonesia is likely to be the first to sign up, and my guess is that Vietnam, the Philippines and Cambodia are the other three.

Of all the Southeast Asian countries, Indonesia is the one that can least afford to antagonise the Pacific. Much of the Pacific – in particular Papua New Guinea and other Melanesian countries – regards Papua as occupied territory. While Indonesia has a massive population, and will no doubt be grateful for any job-creation opportunities that come its way, it will also have to ask whether a couple of thousand visas from Australia is worth risking a diplomatic dispute with the Pacific.

In 2019, Indonesia announced its own “Pacific elevation”. This step looks more like a Pacific irritant. Indonesia is already entitled to send 4,264 backpackers to Australia every year under a Work and Holiday visa that allows the holder to work in Australia for up to three years. No Pacific country has a backpacker visa. Why then, the Pacific might ask, should Indonesia also be able to encroach on the Pacific equivalent, the SWP and PLS?

Third, the Australian government has released further detail on the terms and conditions for the agriculture visa. Overall, these are very similar to PALM. Potential differences between the two visas (the ability to bring in skilled workers and a pathway to permanency both mooted for the AA visa) have been put off to the future. The only actual difference I could find is that industry accreditation will entitle employers to participate in the AA visa; it doesn’t for PALM visas.

One requirement for the AA visa is that workers have “functional English”. This is also now being proposed for SWP workers – which is unfortunate because it may increase the already existing urban bias in SWP recruitment.

The virtually identical nature of the two schemes will no doubt disappoint many farmers who were hoping that the AA visa would be less bureaucratic and more flexible. But, as I have argued, it would be impossible to justify different terms and conditions to employ the same workers from different countries.

The inevitable similarity of terms and conditions between the two schemes raises its own problematic question: why have a new visa at all? The government’s latest fact sheet says that there are 55,000 Pacific islanders ready to come to Australia under the PALM visa. Why then are we sourcing 8-16,000 from Asia?

The implicit – at times explicit – answer from the government has always been that the new visa would be more flexible. Now that that response is no longer available, someone needs to ask the Minister for Agriculture the following question: If the new visa is recruiting workers to do the same jobs as PALM workers from the Pacific, under the same terms and conditions, and there is no shortage of workers from the Pacific, why are we introducing a new visa for Asian workers, thereby undermining the Pacific Step-up?