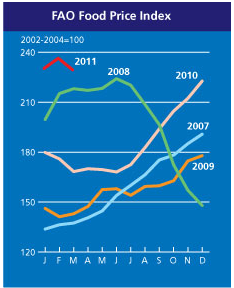 The world food system is in crisis. World food prices surged to a new historic peak in February, for the eighth consecutive month, according to FOA’s updated Food Price Index. The Economist notes that food prices are now higher in real terms than any time since 1984. According to Zoellick, president of the World Bank, ‘Global food prices are now at dangerous levels. It is already clear recent price rises for food are causing pain and suffering to poor people around the globe.’  The Bank estimates that rising food costs have pushed 44 million people into poverty since last June. Food security is on the top of the G20’s 2011 to-do list.

The impact on Asia-Pacific?

Rising food prices is a concern for social stability in the region.

The Asia-Pacific region is home to over half the world’s population and nearly two thirds of the world’s hungry people.  The poor spend the largest proportion of their disposable income on food, in the Asia-Pacific region this is roughly 50 to 70 percent.. In comparison, Europeans spend roughly 10 percent. The poor will face greater difficulty adjusting to food price increases with little capacity to cope and no access to resources.

The ODI produced a report on the countries vulnerable to a 2011 price spike. The criteria being: high current levels of hunger; countries where cereals make up most of the staples consumed; and countries with a dependence of imported cereals. Central Asia was recognised as a region most at risk.  Cereal constitutes 60 percent of the total energy intake of consumers in South-East Asia and South Asia, and 50 percent in the Pacific. Cereal prices may rise further if drought lays waste to China’s wheat harvest – the world’s largest crop – as is feared.

Countries which do not have good local market systems will be most impacted.  Those with little or no access to their own production or the cash needed to buy produce, such as poor urban dwellers in Tuvalu, Kiribati, Fiji, the Federated States of Micronesia and the Republic of the Marshall Islands, are likely to be the worst affected.

The rise in food prices will impact on economic growth, inflation, fiscal balances as well as poverty and inequality.  The delay in economic and social development in countries such as Fiji, Tonga, Vanuatu and the Solomon Islands, who have suffered recent political instability and greater unemployment, will be exacerbated.

Perhaps the most striking trend has been the move from ‘food security’ towards ‘food self-sufficiency’ as a goal of national policy. The Philippines says it hopes to grow 98 percent of the rice it needs by next year and Indonesia’s President said food self-sufficiency must be reached when he announced increases in seed, fertiliser and credit subsidies last year.  In response to the 2007-08 food crisis, studies show that developing countries in Asia were the most proactive in terms of government intervention, supporting consumers and managing/regulating food markets.

The FAO says while stockpiling emergency supplies is understandable, and can serve as buffers at times of volatile prices and food insecurity, hoarding staples and banning exports only made the situation worse in the 2007-08 food crisis. Higher food trade, NOT less, can reduce the impact of shortages.

Is regionalism the answer?

Many point to integration and regionalism as a solution.  There is evidence that food production at regional level is much less volatile than at country levels. Therefore, the best way would be to view food production from a broad regional perspective rather than from country specific contexts; regional organisations like ASEAN can play a critical role to relieve the fears of individual countries by asserting the support of member states in a severe crisis.

Production vs distribution (The Economist vs Oxfam)

Like most mainstream analyses, The Economist’s recent publications on the issue seems to focus on the production challenge: the answer is to increase production. This requires higher returns to farmers, which will attract higher investment.  The Economist suggests targeting help to the poorest is part of the solution. Examples are conditional cash-transfer programs such as Mexico’s Oportunidades and Brazil’s Bolsa Família where incentives are offered to spur agricultural output.  Investment in agricultural research and technology is vital; the Green Revolution began with public research. So did Brazil’s recent farming successes.

Duncan Green, Head of Research for Oxfam emphasises distribution rather than production as the problem. Perhaps the world produces enough food to feed the world’s population and the problem is that it is not distributed equitably. World agriculture produces 17 percent more calories per person today than it did 30 years ago, despite a 70 percent population increase. This is enough to provide everyone in the world with at least 2,720 kilocalories (kcal) per person per day (FAO 2002, p.9).  The principal problem is that many people in the world do not have sufficient land to grow, or income to purchase, enough food.  Jeremy Hobbs, Oxfam’s Executive Director claims ‘the problem of hunger and poverty in a climate-changing world will not be solved simply by throwing more money at fertilizer, higher-yielding seeds and big irrigation schemes to increase production.’

The use of the term food security at the national and global level tends to focus on the supply side of the food equation. The question raised is: is there enough food available? But availability does not assure access, and enough calories do not assure a healthy and nutritional diet. The distribution of the available food is critical. If food security is to be a measure of household or individual welfare, it has to address access. What is the use of greater production without improved capabilities to distribute the food supply. Food security depends as much on income as on food availability. Food security cannot be achieved without stable, efficient and equitable distribution systems that can deliver food to the whole population.

People who have sufficient income are more likely to have adequate access to food. Thus, effective efforts to eliminate poverty and enhance the purchasing power of the poor and other vulnerable groups will contribute towards ensuring food security. In that regard, there is a need to establish and strengthen public food distribution systems that target food support to poor households. Governments could consider having such food distribution system managed by civil society groups, local enterprises or groups of small farmers. Comprehensive social protection systems can also play a vital role. Guaranteed employment for food-insecure groups is a major means of ensuring economic access to food. Public employment guarantee schemes not only ensure a minimum level of food consumption, but also help people to avoid resorting to damaging coping mechanisms that involve asset sales and indebtedness. School feeding programs are critical in providing basic nutrition to children while encouraging attendance. Food for works and similar programs are important to provide access to food during lean periods and other emergencies.

Danielle Hay is a Research Assistant with the Development Policy Centre at ANU’s Crawford School.