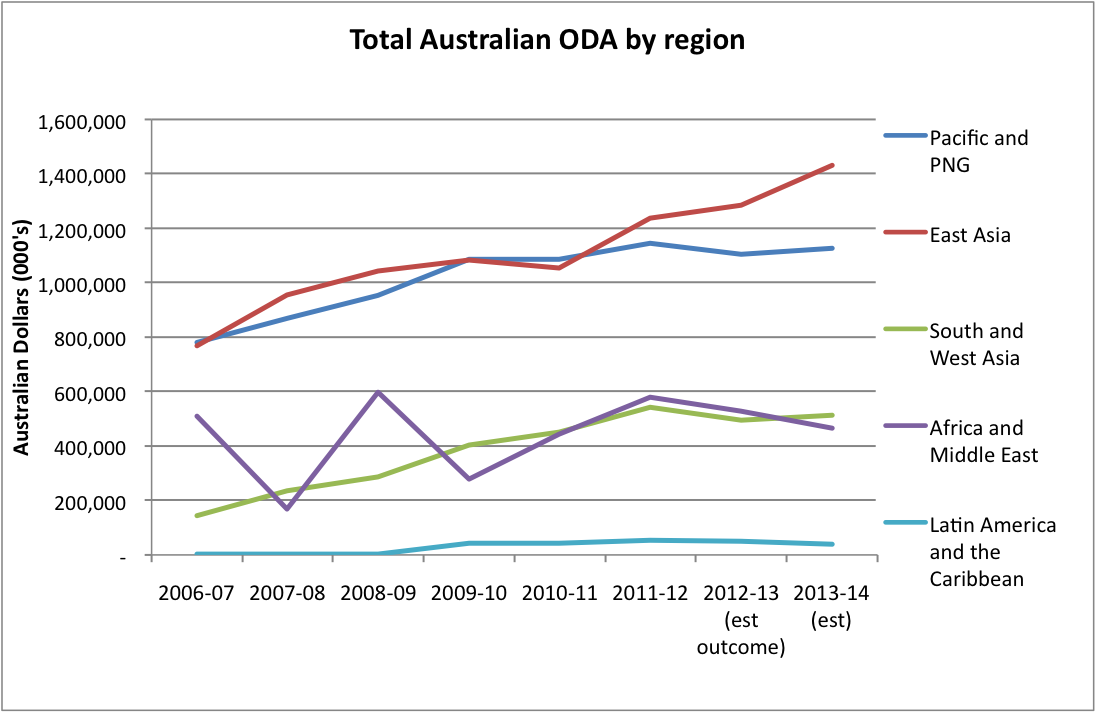 Indonesia is the big winner in the 2013-14 Australian aid Budget. The Indonesia program will see a funding increase of $105.2 million, with total aid to Indonesia amounting to $646.8 million in 2013-14. This represents an increase of 19.4 percent on last year, and a 91.5 percent increase on aid since 2006-07. Indonesia is now by far the biggest recipient of Australian development assistance. Papua New Guinea, traditionally the biggest and now the second largest recipient of Australian aid, will receive $507.2 million; an increase of just $6.5 million or 1.3 percent.

Other countries that receive large increases in aid are Myanmar and Fiji. The Myanmar program will grow by 29 percent on last financial year to reach $82.8 million, the majority of which be channelled through multilateral trust funds. Fiji will see an increase 18.3 percent with total Australian development assistance reaching $58.2 million. This increase is on top of a doubling of aid to Fiji in 2012-13. The increase in aid to Fiji had previously been announced by Government, and a large proportion of the program will be channelled through 70 civil organisations.

At the regional level, the largest increase in funding is directed towards East Asia. Indonesia and Myanmar benefit most, with the remainder of the increase spread across other countries. East Asia is now clearly the largest recipient of Australian aid, pulling ahead of PNG and the Pacific since 2011-12.

Aid allocations to other regions are flat in comparison. Funding to PNG and the Pacific increases by $21.9 million, or 2 percent on actual allocations last year. This represents a $45 million decrease compared to the 2012-13 budget estimates.

It is interesting to compare regional budget allocations with the direction outlined by the Comprehensive Aid Policy Framework, which was released alongside last year’s budget (an updated version of the CAPF will be released later in the year). That document forecast aid in 2015-16 of $1.6 billion to Pacific and PNG, $1.95 billion to East Asia, $725 million to South and West Asia, $625 million to Africa and Middle East, and $50 million to Latin America and the Caribbean. Those figures have presumably been delayed by one year (or more).

Development assistance to East Asia in this year’s budget is consistent with a steady increase towards the CAPF forecast. This is not the case for other regions, where there will need to be sharp increase in the next two years for estimates to be achieved. This is especially evident for PNG and the Pacific, where aid would need to increase by $474 million to reach the $1.6 billion forecast. It will be interesting to see whether forecasts are revised in the updated CAPF when it is released later this year.