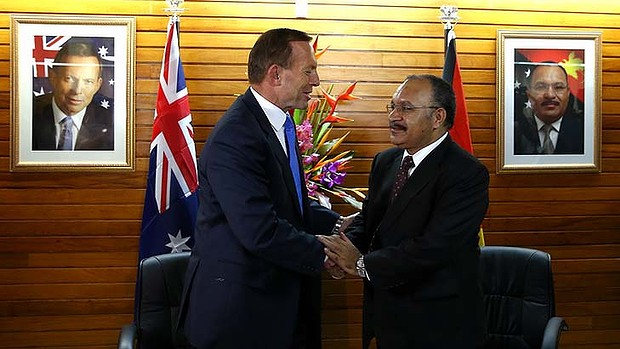 Prime Minister Tony Abbott has said Australia is talking to Pacific island countries other than Papua New Guinea and Nauru about resettling refugees from the Manus Island and Nauru processing centres. This emerged after Papua New Guinea’s prime minister, Peter O’Neill, called for other Pacific island countries to help out: ‘We expect everybody to carry the same burden as we do’. Abbott echoed him, saying these countries should ‘bear their fair share of the burden’.

Labor’s Penny Wong has criticised the Prime Minister for ‘lecturing’ Pacific island nations. The Greens’ Sarah Hanson-Young has said these nations are ‘struggling to feed, house and clothe their own populations’. She might have said ‘growing populations’, as Pacific populations are still growing by about two per cent per annum on average, enough to double the region’s population within 35 years or so. For comparison, the OECD population growth rate is 0.17 per cent, and the world’s is 1.14 per cent. The impact of this growth on population density can be seen in the figure below: at 35 people per square kilometre the Pacific island countries, excluding Papua New Guinea, are about to overtake the OECD. 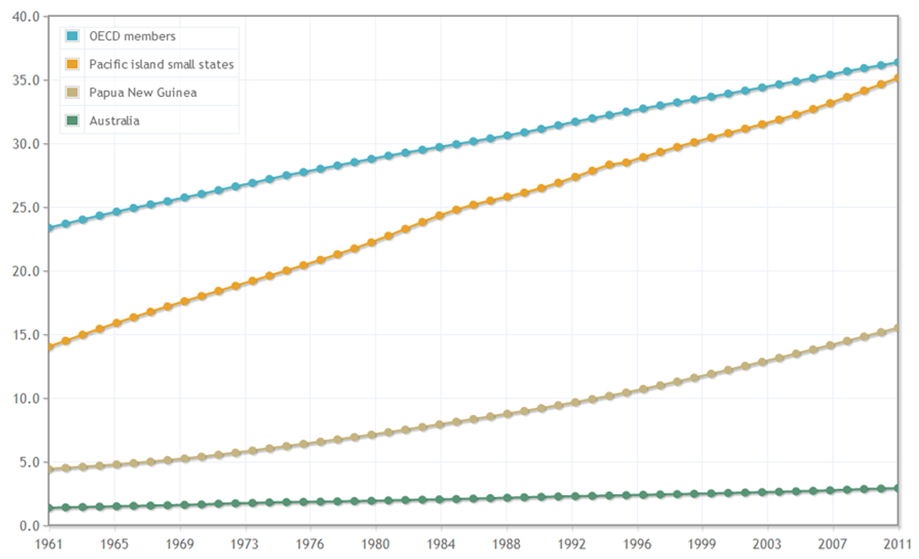 Adding refugees from Manus and Nauru to increasingly dense Pacific populations would certainly place additional demands on social services. Whether the net costs to Pacific economies would be positive and significant depends upon how productive resettled refugees turn out to be—but there would likely be substantial such costs during a transitional period, which could stretch over several years. This raises an important question: if any Pacific island countries were actually to answer Abbott and O’Neill’s call to share the refugee burden, how would the associated costs be met?

The first part of the answer is clear enough. Australia would pay. See the following extract from the mid-2013 regional resettlement arrangement (pdf) with PNG. The corresponding arrangement with Nauru includes similar language.

The second part of the answer is less certain but is very likely to be this: Australia’s overseas aid program would pay. This is allowed under the same OECD rules (pdf) that controversially confer aid eligibility on refugee and asylum-seeker costs incurred within donor countries. Under these rules, ‘expenditures for voluntary resettlement of refugees in a developing country’ are allowable as aid and are ‘allocated geographically according to the country of resettlement’ (para 108).

Aid has in fact already been allocated for this purpose. We drew attention last year to an unremarked aid reallocation in the former government’s August Economic Statement, which provided $236 million over four years (2012-13 to 2016-17) as ‘support for unauthorised maritime arrivals living in community based arrangements’ in Papua New Guinea. We said at the time that this was strangely vague language, and speculated that it might have been intended to cover two different types of cost: resettlement costs for people found to be refugees, and community detention costs for people awaiting determination, as happens here in Australia. Funds might have been used for the latter purpose if boat arrivals had not slowed, leading to pressure on the Manus Island detention facility.

It is safe to assume the $236 million commitment still stands. The present Australian government has not departed in any other way from the previous government’s arrangement with Papua New Guinea. Given that transfers to Manus and Nauru have pretty much ceased, let’s assume community detention won’t be practised offshore and that the funds allocated in the August statement are fully available for resettlement, both within Papua New Guinea and regionally. At the time the allocation was made, plans were afoot to increase the capacity of the Manus facility so that it might house 3,000 asylum seekers, up from 600. If every one of those 3,000 places had been filled and, say, 90 per cent of the asylum seekers on Manus were ultimately deemed to be refugees, a budget allocation of $236 million over four years would imply a resettlement cost per refugee of at least $22,000 per annum. (This is around 70 per cent higher than the amount we calculated last year might be the aid program’s contribution toward the per-capita annual cost of asylum seekers in the Australian community, which was around $13,000. That seems plausible, given that a premium would be paid for offshore service delivery via contracted providers.)

At present there are around 2,000 people in the two offshore processing centres (UNHCR reports from last October provides details of the detainee populations on Manus (pdf) and Nauru (pdf)). If we again assume that about 90 per cent of these people were ultimately found to be refugees, the total annual resettlement bill would be around $40 million. Even if a rather lower proportion of them were determined to be refugees, the cost would probably not be much less than this. The per capita resettlement cost estimated above reflects very conservative assumptions about refugee numbers, status determinations and the phasing of those determinations. If only half the people on Manus and Nauru were found to be refugees, but the per capita cost were $35,000, the bill would still be $35 million per annum. In reality, the proportion of asylum seekers found to be refugees is likely to be closer to the 90 per cent mark, reflecting outcomes in Australia (after appeals).

In the context of Australia’s $5 billion aid program, $35-40 million is not an enormous sum. But the actual cost could be much greater, especially if the present boat-borne asylum-seeker drought breaks. And then there’s the point of principle. The government ridiculed the previous government for making Australia the third-largest recipient of its own aid by spending aid on asylum seekers within our borders. Spending aid on offshore resettlement is no different: they’re our asylum seekers, as is fully acknowledged in the arrangements with Papua New Guinea and Nauru.

So was the Prime Minister ‘lecturing’ Pacific island nations about their responsibilities? Perhaps, and perhaps also implicitly reminding them what they owe Australia as their largest aid donor. But, more likely, his remarks signalled the availability of additional aid for some countries—even if at the expense of others. How tempting any veiled offers might be depends in part on the profit margins involved. At some level of profit, one or two Pacific island countries might be tempted at least to consider establishing a ‘refugee farming’ industry. But there is little evidence to date that any more countries in the region, including Solomon Islands and Vanuatu, are willing to trade off relatively minor profits against loss of sovereignty and social cohesion.