In the aftermath of Rio+20, there has been much attention paid to the voluntary renewable energy targets adopted by various Pacific island governments as part of the Barbados Declaration. All of the coverage that I have seen has been positive, painting the targets as a means by which vulnerable countries are: “attempt(ing) to secure the future of their people” (to quote a WorldWatch blog; for other examples see this and this article in the popular US magazine, MotherJones).

The targets that have been adopted by Pacific island governments are shown in table 1. 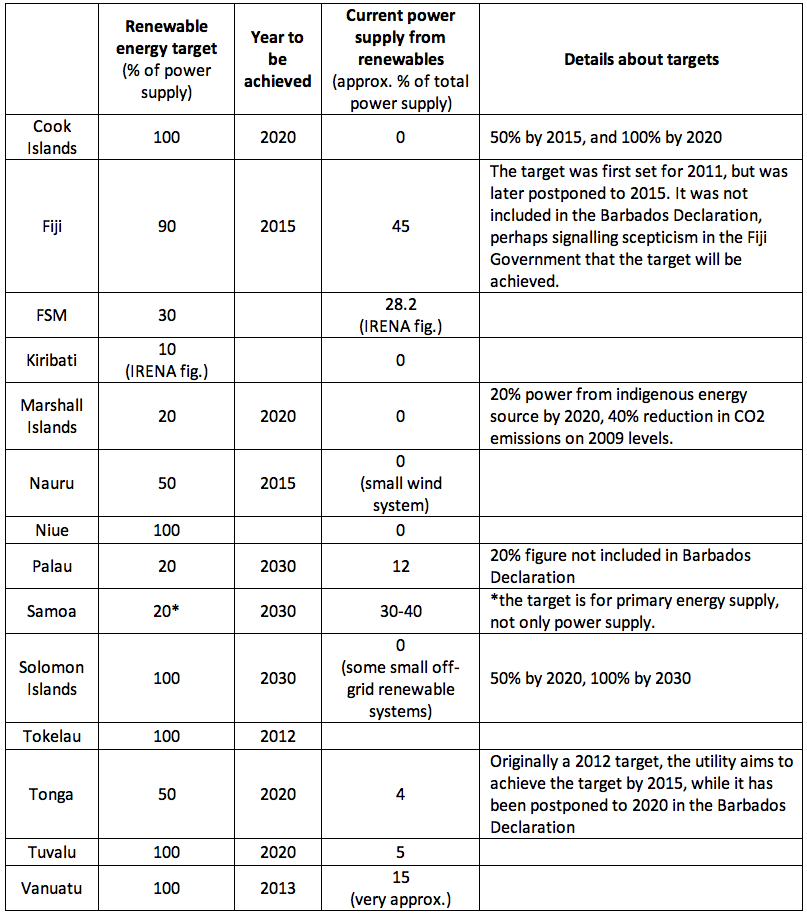 Source: These data are from a range of sources, including the Barbados Declaration, government webpages, SPREP reports, and the International Renewable Energy Agency (IRENA).

What is striking about many of these targets is their ambition. Six Pacific island countries/territories aim to generate 100 per cent of their electricity from renewable technologies. Contrast this with the 20 per cent target established by both the EU and Australia for 2020; or targets in developing countries such as China (15 per cent by 2020), Chile (10 per cent by 2024), Argentina (8 per cent by 2016), or Taiwan (12 per cent by 2020). Most of these targets are not new. In the last 5 years, the majority of Pacific island countries have established renewable energy targets, as have Small Island Developing States in other parts of the world. To clarify, these targets in the Pacific relate to the electricity grid: off-grid power generation in rural areas is insignificant, as is cost-effective rural electrification using small solar systems.

There are a number of reasons for thinking that these targets are overly ambitious. Generating 100 per cent of electricity from renewable energy is costly in many Pacific island countries, given the limited availability of low-cost renewable energy resources. In low islands and atolls such as Tuvalu (Funafuti), Niue, Tonga (Tongatapu) and Nauru, solar and wind power is available, but is expensive (wind power is expensive in the Pacific given low wind speeds and, in some countries, the need to ‘cyclone proof’ wind turbines). The intermittent power supply from these technologies is also a problem, as is the need to have sufficient generation capacity for when demand for power is at its highest (such as in the early evening). The storage of electricity is likely to be necessary in these countries under a 100 per cent target, but this is very expensive.

But many countries that have established 100 per cent targets have no such resource base. Consider Tuvalu’s main atoll, Funafuti. The Tuvalu government’s 100 per cent target is predicated on 95 per cent of electricity demand being met by solar power, and if feasible, 40 per cent being met by wind power. The government has also said that 5 per cent of power may be met by biofuel-powered generators (and given the lack of biomass in Tuvalu, it is likely that this fuel would need to be imported). This power generation mix would almost inevitably require battery storage. It would also be extremely expensive, notwithstanding Tuvalu’s current reliance on diesel generators.

I am not arguing that no investment in solar or wind power is warranted in such countries. Even Tuvalu could benefit from some investment in high-cost renewable technologies, as these would provide risk mitigation benefits against oil price volatility (a case made in a previous post and discussion paper [pdf]). But the 100 per cent renewable energy target, if pursued, would have no diversification effect. The risk mitigation benefits of high-cost renewable technologies therefore do not justify a 100 per cent renewable energy target – an energy mix with some diesel-based generation would both be cheaper and involve less financial risk.

Does it matter that ambitious renewable energy targets are likely to be expensive in many Pacific island countries? It depends what governments in the Pacific are trying to achieve.

If the goal of Pacific island governments is to directly address climate change in a cost effective way, high renewable energy targets are not appropriate. The emissions of these countries are simply too small, and the cost of mitigation too high, for such targets to be effective. The renewable energy targets also often do not incorporate energy efficiency improvements – a far cheaper source of greenhouse gas reductions than renewable technologies.

A more compelling argument for the targets is political. These targets can be viewed as a lobbying mechanism designed to push larger countries to take action against climate change. Personally, I believe that there are better ways to go about lobbying large countries to reduce greenhouse gas emissions, such as by focusing on the impacts of climate change in the Pacific. There is no need to show the rest of the world that generating electricity using 100 per cent renewable energy technologies is feasible. This is already known (as the surge in ‘green villages’ in various wealthy countries demonstrates). It is the cost, the political economy, and the public good aspects of climate change action which are limiting action among larger countries, not the technological feasibility.

Why then are Pacific island countries with limited renewable energy resources adopting such drastic targets? I believe that at least part of the answer is that the money is coming from elsewhere.

The governments of Tuvalu or Nauru cannot afford the investment required to meet their ambitious renewable energy targets. Donors are therefore central to providing the necessary funding. There are plenty of donors willing to invest in renewable technologies for small island states at risk from climate change. It does not matter that these investments are meaningless in terms of addressing climate change, or that the funds could be better spent on energy efficiency improvements in the power sector (as admittedly, is being done in some cases, such as through the Tongan Energy Roadmap). Pacific islands, in the words of a financier who specialises in the Clean Development Mechanism, are a “sexy investment” for donors and investors.

Indeed, renewable energy targets can be viewed as a means of attracting donor funds for Pacific island countries. I see this is an important reason for the extremely high renewable energy targets in the region – and a way of explaining why African countries also have very high targets (targets for countries in both regions are available on the IRENA webpage, although some are dated). Adopting extremely ambitious renewable energy targets provides a signalling effect to donors that a country is serious about renewable technologies. Pacific island governments at the same time are able to demonstrate to the world that they are reducing greenhouse gas emissions (albeit, not with their own money), and that larger countries (and especially developed/donor countries) should be doing likewise. There are therefore political benefits for Pacific island governments, and image-related benefits for external donors.

Again, I want to stress that this argument is focused on the highest targets in countries with limited hydro, geothermal and biomass resources. The 90 per cent target Fiji has established is entirely appropriate given its abundant low-cost renewable energy resources. High targets are also appropriate in Vanuatu, PNG, and to a lesser extent in Samoa and Solomon Islands.

Unfortunately, four of the six Pacific islands with a 100 per cent target have no low-cost renewable energy resources. These high targets are therefore not cost effective: not as a means of addressing climate change, and not as a risk mitigation measure against oil price increases. These are political targets. They have been established because of the prospect that donors will fund such investments. It is time that donors responded only to sensible energy plans and targets, and not to those that are politically motivated.

Matthew Dornan is a Post-doctoral Research Fellow at the Development Policy Centre.