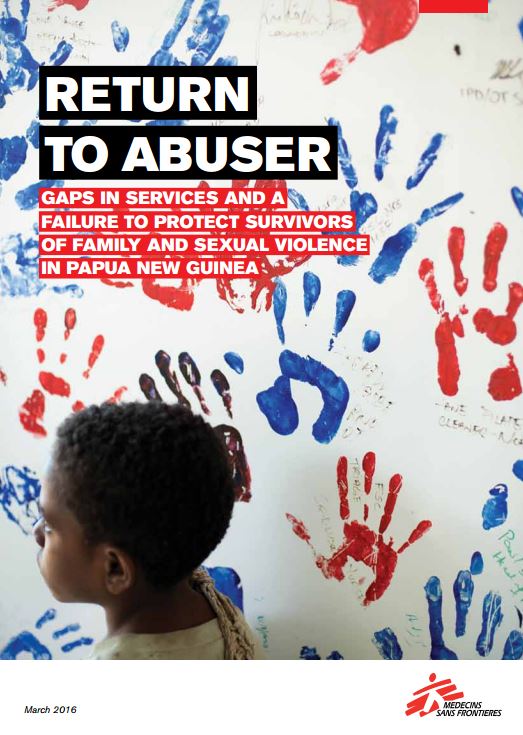 The following is an edited version of their discussion. Listen to the full podcast here.

Ashlee: The report really suggests that most survivors of family and sexual violence in PNG don’t have any options beyond returning to the homes or communities where they’ve experienced abuse. Why has MSF chosen this focus for the report?

Abdul: MSF, being an emergency medical organisation, doesn’t have the mandate to provide protection services and so on. But survivors need that.

Our report mainly focused on our experience of seeing survivors and treating them, and then when it comes to the next step beyond our clinic, what do we do?

When we were analysing the data of the last two years, from 2014 up to November 2015, for our Family Support Centres (FSCs) in Port Moresby and in Tari, we treated 3,056 survivors of family and sexual violence, of which 94 percent were women. Of that, 49 percent of them had experienced violence from their intimate partner. So they were in the same house, in the same community, in the same family, as the perpetrator.

There is a huge lack of safe housing. The younger the survivor is, the more likely they will go back to the same place where [the violence] happened. Of course now there are some policies initiated and ratified, like the Lukaitim Pikinini Act (child protection). But that needs to be certified and implemented. And at the moment, safe houses are in limbo because they don’t have any legal recognition. There is no shelter policy in the country.

Ashlee: What kind of response have you had to the report so far?

Abdul: The initial response that we got from the local authorities in PNG, and lots of other NGOs and partners who have been working closely with us for the last seven or eight years, was amazing and positive. Some of them joined us for the launch, such as the Secretary of Health and the Secretary for Community Development, who said: “it will help us to fight more.” Their departments are understaffed, under-resourced and underfunded.

Ashlee: Through our work with Femili PNG, we know how hard resourcing is, which is mentioned in the report. We’ve seen cases where women have gone to the police for help, and the police haven’t had money for petrol to go and issue an IPO to a perpetrator and so on. Where should the resources for FSV be coming from?

Abdul: That’s why this report is focusing on the national government, so that they focus more on [FSV] in policy development and in budget allocations, and give priority to the implementation of these policies. But also for international organisations and partners to work in the same vein.

Ashlee: Much development funding in PNG now goes through the district level, through the District Services Improvement Program (DSIP). Are you seeing much interest at that level in providing any kind of additional support for FSV services?

Abdul: Not that much. That transition is still very new. And when it goes down to the local government level and district level, they are still finding it difficult to mobilise and allocate the resources that they have.

I think that is something the donor community and international organisations, especially those organisations like DFAT who have a mandate of longer-term commitment, could give guidance on and build up capacity in. Because the person who is at the local or district level of responsibility is not necessarily well-qualified or well-experienced in all aspects of how to deal with a budget and how to prioritise, or how to make a five-year plan, or where to start.

Abdul: I think civil society has always had a role, and a crucial role. For example, FSVAC is actually pushing for the drafting of the shelter policy. But of course, there must be a particular will to listen to them.

But on the other hand, overall, this violence, family and sexual violence, is part of the culture, and it’s very much linked with all the health determinants. It’s linked with education, with the economy, all sectors are involved.

So in each sector, civil society has its role to play. For example, in universities, there needs to be an effort to revise the curriculum. Mental health and counselling, and psychosocial counselling, is not part of the training curriculum.

And for the international community, there needs to be more focus on establishing, or studying, or preparing at least for baseline prevalence. When we are talking about the huge humanitarian crisis of family and sexual violence in PNG, we are all referring to studies that were done in the 1980s and 90s.

There are big donors in neighbouring countries who have the commitment to invest in this. If we have at least baseline prevalence, and then a proper database and information systems, then it can be seen over the years how it goes.

Ashlee: I did also note the recommendation in the report that international donors should focus more on the needs of children. Is this something that hasn’t been adequately looked at?

Abdul: It has been recently focused on a little bit. For example, through UNICEF, there is work on the child protection aspect. But when it comes to provision of medical care and psychosocial care, and on top of that, re-engagement and follow-up with how children are coping with the impact of this tragedy or incident, and how it impacts on the mental health and development of children, there is nothing. Nobody. Even most of the seven well-functioning FSC facilities  — except Port Moresby General Hospital FSC where there is a specialised child counselling office — don’t have the technical skills and expertise and capacity to provide proper child counselling.

Ashlee: Earlier you mentioned the balance between long-term behaviour-change type work, and then trying to meet immediate needs. Do you think the donor community has got the balance right on that, or should they be focusing more on services?

Abdul: I think there is a lot going on in PNG. Despite the fact that PNG didn’t meet any of the MDGs, there has been significant improvement in investment in all sectors. But because of the lack of a reporting system, it isn’t reflected.

For example, there are a couple of organisations who have done quite a significant job on community engagement and community awareness, and health education. And then after one or two years, all of a sudden, you’ll have another NGO doing the same thing in another place without necessarily following what was acceptable, feasible, and what was learned.

And that goes back to the main donor, and to that particular department, and for the government of PNG to take leadership and ownership, to have a clear national response strategy and focus, and to divert all the resources of the NGOs to follow that line, so that, at the end of the day, there is sustainable progress.

Ashlee: I wanted to finish up by asking you about MSF’s plans going forward, because you have handed over or are about to hand over your remaining Family Support Centres. Is MSF now moving out of the FSV space in PNG?

Abdul: Since 2007, MSF Holland has been involved in the response to family and sexual violence in PNG, and we are going to hand over our last Family Support Centre entirely by the end of March. MSF will be still in the country, but will be focused on the response to the TB outbreak.

Abdul Wasay Mullahzada was MSF Medical Coordinator for PNG until March 2016. Ashlee Betteridge is a Research Officer at the Development Policy Centre.