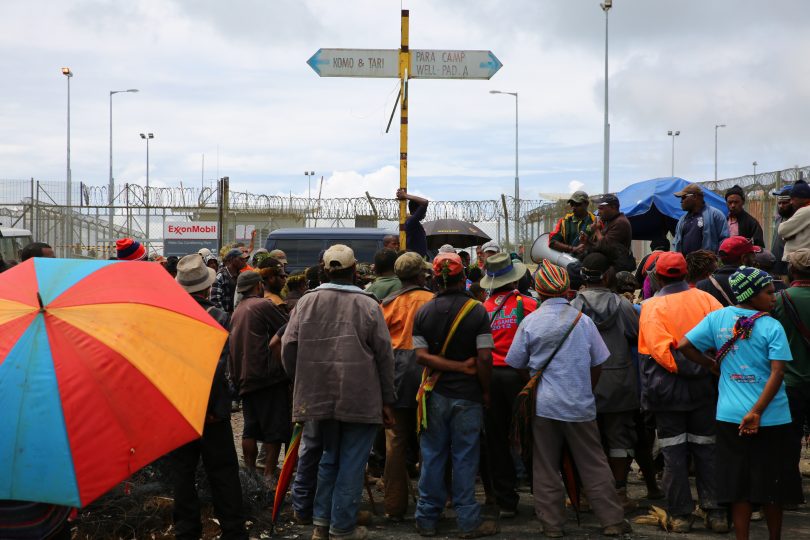 On the 25th of January this year, Papua New Guinea’s Post Courier newspaper reported that the National Court had just overturned a decision made by a provincial land court magistrate in 2006. The decision in question was meant to resolve a dispute between two members of a Huli clan about the ownership of land in the Moran petroleum development licence area, which is one of eight licence areas that now form part of the PNG Liquefied Natural Gas (LNG) project. But it seems that the magistrate ‘mistakenly’ granted one of the disputing parties rights to land in an adjoining licence area that belonged to a Fasu clan, and this had led to unlawful encroachment by members of the Huli tribe, onto land that rightfully belonged to members of the Fasu tribe.

The consequences might have been more serious if the royalties owing to the landowners had actually been distributed, since a group of Huli landowners might then have collected the money that should have gone to a group of Fasu landowners. But nearly all the landowners attached to the LNG project are still waiting for these payments to be made, four and a half years after the PNG government began to collect the royalties on their behalf. The ‘landowner problem’ is a problem for the government and the developers because they cannot work out who is actually entitled to receive the various landowner benefits promised under the benefit-sharing agreements signed in 2009. Even when money has been distributed in one form or another, the result has generally been a barrage of complaints about the misappropriation of these benefit streams by so-called ‘paper landowners’ in league with corrupt politicians and public servants. Anthropologist Michael Main has documented the moment, in August 2016, when some of the Huli landowners shut down one of the project’s main facilities to express their “immense frustration, disappointment and palpable anger at the absence of benefits”. He also claims that Huli people saw last year’s massive earthquake, which closed down the whole operation for several weeks, as a further manifestation of the ‘resource curse’ that has undermined the promise of development that was contained in the benefit-sharing agreements.

In previous posts on this blog, there has been a good deal of discussion about who, or what, is to blame for the absence of a solution to the landowner problem. In 2016, Sam Koim and Stephen Howes placed the blame on an ongoing contest between bureaucratic and judicial approaches to the problem of landowner identification, arguing that this contest had been exaggerated by changes to the law that governs the incorporation of groups of customary landowners. Last year, I argued that the problem had also been compounded by a disjunction between the forms of knowledge produced by lawyers and anthropologists engaged in their own pursuit of a solution under the terms of the Oil and Gas Act 1998. I also argued that this gap had been widened by the government’s failure to produce an additional regulation that should have governed the conduct of the social mapping and landowner identification studies that are a legal precondition to any benefit-sharing agreement in the oil and gas sector. Anthropologists Monica Minnegal, Michael Main and Peter Dwyer have suggested that the problem is further compounded, and certainly not resolved, when cash benefits are actually distributed to landowners or their representatives, citing evidence of fraud and corruption in the distribution of business development grants to landowner companies that actually did begin during the project’s construction phase. But a person called Vailala, who has commented extensively on both of last year’s blog posts, contends that anthropologists themselves are partly to blame for the absence of a solution, since their form of knowledge has disguised the true nature of local custom, intensified local struggles over access to landowner benefits, and, in the process, even denied the rights of local women. From Vailala’s point of view, the judicial approach is the only one that makes sense, and if it were not for the interference of anthropologists and bureaucrats, the judicial process would already have solved the problem.

In order to untangle and evaluate these different lines of argument, I have now written a discussion paper in which I place the search for solutions to the landowner problem in a much broader historical context. The roots of the problem and its possible solutions are traced back to a succession of policies and practices that have their origin in the late colonial period, that were subsequently applied to the development of major mining projects, and then to the development of PNG’s oil export industry in the 1990s. Particular attention is paid to the way that the problem came to be addressed in the Oil and Gas Act and to the way that this legislation framed the unsuccessful search for a solution during the negotiations that led to the agreements under which the LNG project now operates. If the landowner problem has proven to be a bigger problem for this than for any other project, with the possible exception of the Bougainville copper mine, then that is simply because it is such a big project, there are so many landowners involved, and so much is at stake in the distribution of landowner benefits.