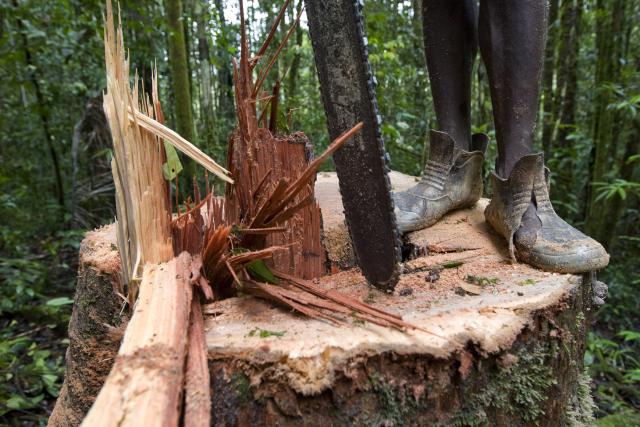 In September 2017, Papua New Guinea’s Supreme Court rejected an appeal by PNG’s biggest logging company, Rimbunan Hijau (RH), against an earlier decision of the National Court to award damages to the representatives of a landowning clan who claimed that the company had failed to identify them as the true landowners of an access road and log pond in the Central Province. Two months later, a post to the PNG Mine Watch blog quoted two paragraphs from the Supreme Court judgment in which this was said to be but one example of ‘a sad story that is repeated throughout the country over a long period of time from the colonial administration in the name of opening up wild frontiers for various so-called developments and projects’. The nub of the judicial argument was that the government and developers had persistently failed in their duty to establish the identity of the true landowners, organise them into incorporated land groups (ILGs), and then make agreements with these legal entities that would constitute evidence of free, prior and informed consent, and hence grant the developers a social licence to operate.

RH might have wondered how this argument applied to an agreement they had made with the wrong landowners back in 1988, four years before the passage of a new Forestry Act that required a process of land group incorporation to be undertaken by officials of the National Forest Service prior to the grant of a new logging concession. But what excited the bloggers was the thought that the oil and gas industry was now tarred with the same judicial brush as the logging industry. And what excited them even more was the cross-reference that one of the three judges, Justice Ambeng Kandakasi, made to a couple of his own previous judgments in the National Court, in which he said he had ‘correctly’ described the delinquent government officials and company executives as ‘fraudsters and thieves’.

The first of these judgments related to a case in which a local landowner accused the government and the developer of trying to negotiate a benefit-sharing agreement for the prospective P’nyang gas field in Western Province without having undertaken the ‘full-scale social mapping and landowner identification study’ required by the Oil and Gas Act. The second related to a rather different case, in which one landowner from Hela Province charged another local landowner and a group of government officials with failing to abide by an order for the parties to undergo a process of mediation to resolve an argument about the status of two ILGs that had been incorporated in order to be compensated for the government’s compulsory acquisition of their customary land. Although this second case had no obvious connection with any form of large-scale resource development, this was the case that led Justice Kandakasi to observe that ‘[t]he State and a developer should play a more proactive role in the mediation process and provide the kind of support it needs to properly organise the landowners into ILGs … [to] help eliminate fraudsters and thieves from gaining at the expenses [sic] of the real and genuine landowners’.

When the PNG Mine Watch blog post was re-posted to the listserv of the Association for Social Anthropology in Oceania, the judge himself was charged with misrepresenting the nature of customary land tenure and traditional social organisation. Peter Dwyer, co-author of a recently published book about the way that landowners in Western Province have reacted to the prospect of a gas project on their land, found a section of the P’nyang judgment in which the judge proclaimed the existence of a nationwide form of customary tenure that appeared to be based on his own understanding of the customs of his own people in Enga Province. Jean Zorn, who once taught in the Law Faculty at the University of PNG, thought that he might have been proclaiming the existence of a Melanesian version of European feudalism that he had picked up from outdated textbooks on the British common law. And Bryant Allen, from our own Department of Pacific Affairs, observed that this was not the only Engan who had failed to comprehend the traditional social organisation of the Huli people, who account for the majority of the customary owners of the land around PNG’s first LNG project.

Bryant also made reference to a commentary on the P’nyang judgment by Sam Koim and Stephen Howes, published in December 2016. They construed the judgment as one moment in an ongoing contest between two processes that had been used to determine the identity of the customary owners of land in petroleum development licence areas. On one hand there was a legal process of mediation or ‘alternative dispute resolution’ led by Justice Kandakasi himself. On the other hand there was a bureaucratic process of ‘clan vetting’ organised by officials in the Department of Petroleum and Energy. The other Engans whom Bryant mentions were in fact consultants hired by these officials to undertake this second form of landowner identification.

The latest conversations on this topic reveal that this has not just been a contest between legal and bureaucratic methods of landowner identification; it also represents a disjunction between different forms of knowledge, and even different ideologies. Furthermore, this failure of communication started before the passage of the Oil and Gas Act in 1998, and long before Justice Kandakasi initiated his own brand of judicial activism.

The relevant sections of the Oil and Gas Act clearly make project proponents responsible for the conduct of ‘social mapping and landowner identification studies’, and these studies are then lumped together with court decisions and submissions from other interested parties, as things that the Minister for Petroleum and Energy must take into account when deciding, first, who should be invited to represent local landowners in the negotiation of a benefit-sharing agreement, and second, how landowner benefits should actually be distributed under the terms of such an agreement.

Those of us who were responsible for drafting these parts of the Oil and Gas Act expected that the studies would normally be undertaken by consultant anthropologists, much like the ‘connection reports’ commissioned by Aboriginal Land Councils under the terms of the Australian Native Title Act. And that is pretty much what happened – at least until government officials invented the practice of ‘clan vetting’ and began to hire their own consultants to check what they had already been told by the anthropologists hired by the developers.

As Sam and Stephen pointed out in their blog post, the apparent failure of the anthropologists to produce the information required by the Minister is partly due to the absence of a regulation that should have been added to the Oil and Gas Act, which would have spelt out the relationship between social mapping (which is essentially a documentation of local custom) and landowner identification (which may involve the identification of groups (such as ‘clans’) or the construction of genealogies that show the mutual relationships of individuals within a ‘landowning community’). The absence of such a regulation is certainly one part of the problem, but not by any means the whole of it.

Back in 1994, I was asked by one of the companies involved in the development of the Gobe oil field in Southern Highlands Province to produce a ‘land investigation report’ documenting all the historical evidence that might help the Land Titles Commission (LTC) to resolve the dispute that had arisen over the identity of the customary landowners of the licence area. This request appeared to have the support of what was then the Department of Mining and Petroleum. However, when I was half-way through the process of writing this report, I was informed that the judge hearing the case was not interested in the result, so it was never finished. In 2016, I had another reason to visit the LTC’s office in Port Moresby, where the Chief Commissioner told me that the Gobe dispute – still unresolved — had just been referred back to him by the Supreme Court. He then showed me several metres of shelving now occupied by all the documents that had been produced over the course of the 23 years in which this particular buck had been passed between the LTC, the National Court and the Supreme Court.

I doubt that my report would have made much difference to the resolution of this particular dispute. But the point of interest here is that PNG’s judges do not even recognise the possibility that anthropologists or other social scientists might produce evidence relevant to the resolution of disputes about the identity of the ‘true landowners’ of any piece of customary land. And this is where the practice of the courts in PNG diverges from the practice of the Native Title Tribunal in Australia. Whatever regulations might be added to PNG’s Oil and Gas Act, they are most unlikely to impose an obligation on the judiciary to pay any attention to accounts of customary land tenure or traditional social organisation that are written by anthropologists – especially foreign anthropologists hired by the developers of oil or gas projects who might themselves be counted as ‘fraudsters and thieves’.

Although these terms were not deployed in the P’nyang judgment, the two subsequent judgments contain an interesting implication. If government officials and company executives have indeed been conspiring to make agreements with ‘false landowners’, who would then presumably count as fraudsters and thieves in their own right, their interest in doing so can only be explained on the assumption that the ‘true landowners’ would not agree to the encroachment on their customary land. This is a distinctive strand in what I have previously called the ‘ideology of landownership’, and is in some ways more problematic than the judicial construction of an idealised model of traditional social organisation that fails to fit the kind of truth discovered by anthropologists. For if the validity of any process of landowner identification depends on the discovery of landowners who object to any form of large-scale resource development, it might make more sense for the courts to declare that all forms of large-scale resource development are unconstitutional, and hence remove the need for any such discoveries.