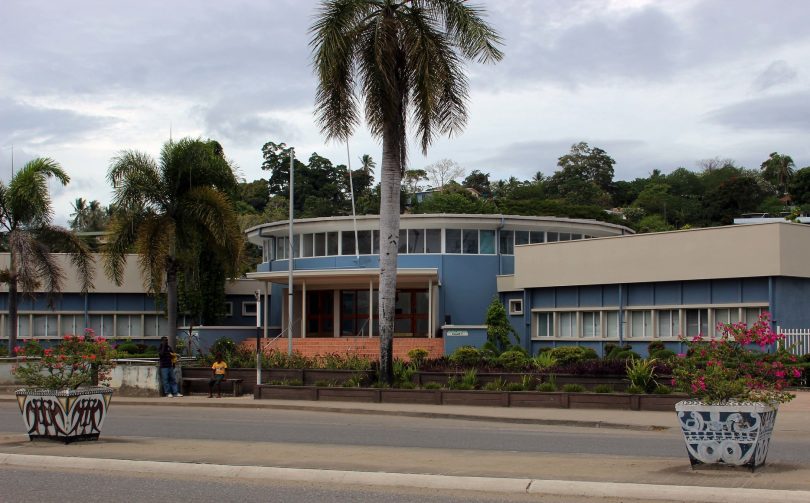 Pacific island states are unusual, but not alone, in relying on foreign judges to sit on their highest courts. Across the nine Commonwealth states of Fiji, Kiribati, Nauru, Papua New Guinea (PNG), Samoa, Solomon Islands, Tonga, Tuvalu and Vanuatu, over three-quarters of the judges serving since 2000 have been foreign judges. Judges are recruited from diverse jurisdictions, including Australia, New Zealand, Sri Lanka and the UK, as well as common law countries in Africa and within the Pacific region itself.

My new book, Foreign Judges in the Pacific, explores what the use of foreign judges means for how Pacific courts operate, how they make decisions, and how they are connected to the wider community. This post focuses on a narrower issue: the intersection of foreign judging and overseas development assistance.

Why do Pacific states use foreign judges? The most common reason given is that there is a shortage of qualified citizens willing and able to take up judicial office, and foreign judges are needed to ‘fill the gap’. On this rationale we can expect that, as more Pacific islanders become judges, Pacific courts will ‘localise’ and rely less on foreign judges. We can already see this happening in PNG, Samoa, Solomon Islands and Vanuatu, where the majority of judges on the superior trial courts are now local judges, although foreign judges are still appointed.

Another rationale that is sometimes offered is capacity building. For example, one job advertisement required candidates to have “proven success in individual and organisational capacity development and sustainability of efforts, ability to share knowledge, and transfer skills.” Candidates were also expected to “be able to encourage and assist legal practitioners and other judicial and support staff in improving their work performance, practices and aptitudes.” In such cases, it seems foreign judges are expected to be part judge, part technical capacity-building expert.

The extent to which foreign judges can – and should – be seen as capacity builders is open to question. Foreign judges can provide a link between courts and legal professions in the Pacific state and their home state. For example, several judges have helped to facilitate training, research assistance and donations of legal materials for Pacific legal communities. There are, however, objections to judges performing a capacity-building role themselves.

Some judges I interviewed were firmly of the view that their role was purely judicial: they were appointed to be judges, and capacity building of the kind sought by development agencies was neither required nor appropriate. The idea that foreign judges are there to ‘teach’ local judges carries colonial overtones, and risks creating a perception, internally and externally, that local judges are not sufficiently qualified and able in their roles. The practicalities of foreign judging – in which many foreign judges visit the Pacific sporadically or serve on short-term contracts – limit the opportunities for foreign judges to build their knowledge of the country’s law in context, and to develop strong relationships with local actors, both of which are essential for effective capacity building.

An overlap between foreign judging and development assistance can also be seen in the terms and conditions for the employment of foreign judges, which in turn has implications for judicial independence.

Not all foreign judges are paid by external funds – some foreign judges are paid by the government of the Pacific state in which they serve, on the same pay scales that apply to all other judges. But for judges supported by development agencies, remuneration raises difficult issues. Foreign judges recruited by development agencies are usually hired on similar rates of pay to external consultants. Some foreign judges receive pay commensurate to what they would earn at home as a judge, in an effort to ensure the position is attractive to good candidates. Both often far exceed what local judges earn and come at the cost of equal pay for equal work.

Many are appointed on short-term, renewable contracts, a practice that suits both Pacific governments and development agencies, but which is a classic ‘red flag’ for judicial independence. Some foreign judges have been unable to continue in office when donors have refused to extend funding, whether because the program has ended, funding has been reallocated, or for other undisclosed reasons. It is a reminder that, for judiciaries which rely on foreign judges, the levers of influence that can potentially undermine judicial independence are not only in the hands of the government but are also held by donor agencies.

Development agencies’ approaches to contractual employment and remuneration do not sit easily with the security of tenure and remuneration required to protect judicial independence. The ad hoc funding of individual foreign judges might meet a short-term need, but it is not the best way to build a strong and sustainable judiciary. The emphasis on capacity building by some development agencies further complicates the role of foreign judges, imposing an expectation that judges are also technical capacity-building experts, or even diplomats.

The question must then be asked: does the appointment of foreign judges on such terms undermine the very qualities of good governance and the rule of law that development agencies seek to promote?

So how might donor agencies mitigate risks to stability and judicial independence? If localisation is recognised as the more sustainable option for Pacific judiciaries in the long run, donor funds might be more effectively invested in legal education, and the development of the legal profession and judicial institutions themselves, as a way to build local legal professions and make judicial office an attractive career choice for Pacific islanders.

The reality, however, is that several Pacific states are likely to rely on foreign judges for some time to come, and so it is worth considering ways to make foreign judging more secure and sustainable, for both individual judges and for Pacific judiciaries. A good start would be to provide foreign judges greater security of tenure and longer terms of appointment, guaranteed by law in Pacific states and adhered to in practice by donor agencies.

Another useful strategy might be to foster formal connections between judiciaries, providing continuity and building a cohort of foreign judges with a connection to the Pacific jurisdiction. Examples include the arrangements between the Vanuatu Supreme Court and the New Zealand District Court, under which a judge of the New Zealand District Court has been seconded to the Vanuatu Supreme Court for two to three year periods on a rolling basis since 2004; and a comparable arrangement between the PNG Supreme Court and the Federal Court of Australia which has been in place since 2011.

Finally, it would be beneficial for Pacific states and donor agencies to provide public justification for the recruitment of a foreign judge in each and every case – whether it is to fill an ongoing vacancy, to meet a short-term need resulting from the recusal or unavailability of local judges, or to provide specialist expertise. Clarity about the rationale is not simply about transparency. It is necessary in order to justify any departures from the standard protections of tenure and remuneration that safeguard judicial independence. And it provides a way to ensure that choices (often made behind closed doors) in the selection of foreign judges, and the terms and conditions of their service, actually help to meet the need for using foreign judges in the first place.

Anna Dziedzic is a Postdoctoral Fellow in the Laureate Program in Comparative Constitutional Law at Melbourne Law School.