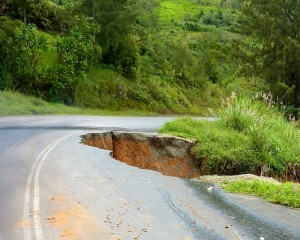 Papua New Guinea faces many infrastructure challenges, chief among them being the management and maintenance of the road network. The 2013 PNG Budget (vol 1) [pdf] offered the following sombre assessment:

Papua New Guinea’s transport networks are failing. Major roads, including the crucially important Highlands Highway, have deteriorated alarmingly, raising the costs and reducing the availability of transport services. Communities … are becoming more isolated because of deteriorating physical infrastructure. In all transport subsectors, the dilapidated state of infrastructure is largely the result of inadequate maintenance and poor management over a long period. (emphasis added)

Lack of maintenance and the subsequent (premature) deterioration of infrastructure has had both financial and broader economic and social impacts. The premature deterioration of a road, for example, results in fewer people having access to health clinics; fewer children attending school; and the disappearance of livelihoods as villagers can no longer get produce to market. It has been estimated in various World Bank and ADB publications that, on average, $1 of road maintenance not performed costs road users between $2 and $3, in the form of vehicle wear, detours to avoid bad parts of road, and (in the extreme) travel that is not undertaken.

But sub-optimal maintenance also has financial implications for government and other infrastructure service providers. It is well known that routine (or preventative) maintenance, on average, provides a better financial return than investment in new infrastructure. The PNG Department of Works estimates [pdf] that $1 spent on routine maintenance saves $4-5 in rehabilitation costs. Despite this, the Department has noted that “the accumulation of deferred maintenance over the years has resulted in 75% of our road network requiring major reconstruction/rehabilitation works.”

Why has maintenance been such a challenge?

There are a number of inter-related causes, which were discussed in some detail in a Pacific Region Infrastructure Facility report that I co-authored last year (available here):

Perverse incentives are not just an issue in PNG. In 1991, the IMF noted in relation to other countries that:

… O&M expenditures have a low priority in government budgets as they are less appealing and visible than new investment projects… Moreover, donors have facilitated … investment projects while providing little support for recurrent costs …

I want to look more closely at resource constraints, which I consider the binding constraint to improving road management in PNG, given their impact on the incentives and capacity of both the civil services and private sector. Lack of money undermines accountability, as road deterioration can always be blamed on inadequate funding. It also makes the development of the private sector difficult: who would invest in road construction/maintenance equipment when it is uncertain whether there will be (government funded) work available for that equipment in the future?

The graph below shows funding allocations and actual spending on rehabilitation and maintenance of the 9,000 km of ‘national roads’ in PNG. Funding for maintenance of the 21,000 km of roads managed by provincial authorities is not discussed, given lack of data, although it is widely acknowledged that these roads are on average in worse condition than national roads. The funding gap is the red area, which shows the difference between budget allocations for maintenance and rehabilitation, and what PNG’s 2011-15 medium-term development plan (MTDP) estimated was needed over four years to achieve the ambitious targets that it established. If less ambitious (and arguably, more realistic) targets are adopted, as done by the National Transport Strategy, annual funding required for maintenance and rehabilitation of roads between 2011-15 is on average $1,017 million Kina, $634 million Kina of which is for the national road network. 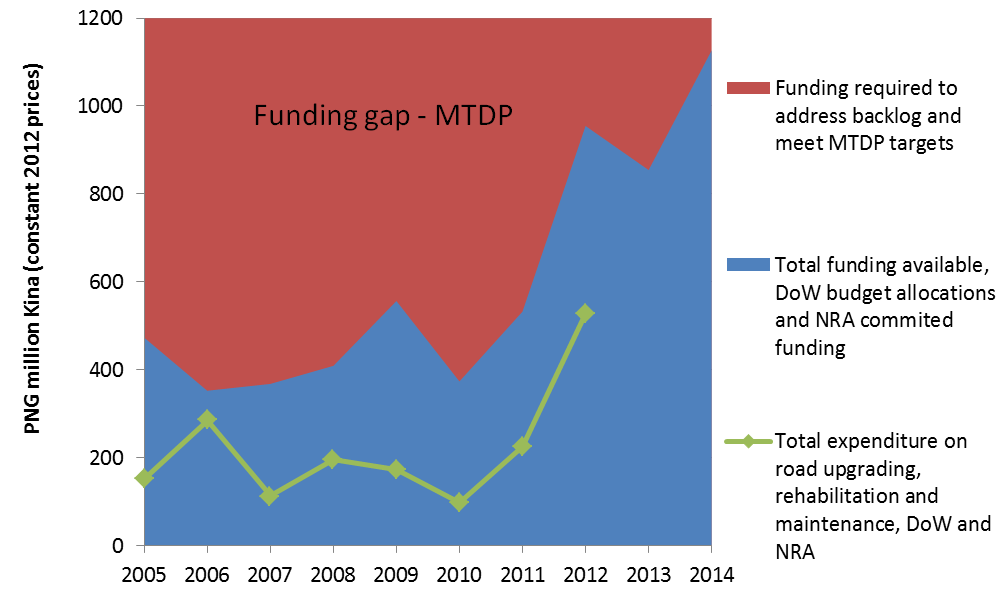 There are three points that can be taken away from this graph.

First, funding for maintenance of national roads in PNG has historically been below what is required. In fact, this has been the case for decades: successive governments in the 1980s-1990s reduced road maintenance funding in PNG, a reduction mirrored by broader declines in infrastructure spending. The 2009 Joint Review of the PNG-Australia Development Cooperation Treaty [pdf] found that government funding for infrastructure halved between 1975 and 1980 in real terms, and declined by another third in the 1990s. The result, not surprisingly, was the dramatic deterioration of the road network, with only 35 per cent of national roads in “good condition” in 2007 (meaning that they were passable by a two wheel drive vehicle in wet weather). Road conditions have since improved for the national road network, but progress is painfully slow.

Second, a large portion of funds allocated in the budget for road maintenance are not spent. That has a number of causes – delays in procurement through the bureaucracy (including approval by the Central Supply Tenders Board, the Solicitor General’s Office, the National Executive Committee, and so on), capacity constraints within road management agencies, and capacity constraints in the private sector.

There is cause for optimism on this point. Spending is increasing, which is an indication that the capacity to implement maintenance/rehabilitation work on the ground is expanding, along with higher funding for these activities. The National Transport Strategy has laid out a program for reform of the road sector, which clearly delineates the responsibilities of different agencies. The Department of Works – the single most important agency for road management in PNG – is also undergoing reform. It is currently establishing regional offices for road works, strengthening important institutions, such as the asset management branch and audit committee, and developing human resource policies.

The third point that can be taken away from the graph is that funding allocations for maintenance and rehabilitation have increased significantly in recent years. The allocation of $1,126 million Kina (2012 Kina) in the 2014 budget is almost equal to what is recommended by the MTDP, and possibly exceeds what is proposed in the National Transport Strategy (although it should be noted that (i) spending is most likely lower than budget allocations, and (ii) it is difficult to separate funding directed toward national and provincial roads in the budget documents, which means that the graph may over-estimate funding for national roads).

These funding increases for road maintenance and rehabilitation are to be welcomed. Budget allocations for maintenance and rehabilitation are at required levels for the first time since independence. Furthermore, the increase is due primarily to government funding allocations, supported no doubt by large revenue flows from resource projects. The increase in assistance from development partners is less important.

The PNG Government is to be commended for directing increased funding toward infrastructure maintenance and rehabilitation. But there is always room for further improvement. In the case of PNG’s roads, more detail could be provided to help determine the effectiveness of spending. Currently, there is limited information available regarding: (i) spending on routine maintenance as opposed to rehabilitation (which is important, given that routine maintenance is generally a more cost-effective use of funds), and (ii) resources available for maintenance of provincial roads. Questions have also been raised about whether funds are being channelled to geographical areas and roads where they are needed most: some commentators criticised the 2014 budget for allocating more money toward road work in Port Moresby than toward the whole of the Highlands Highway (despite the much larger population that depends on the Highlands Highway for their livelihood).

So in summary, there have been big improvements in the road sector in PNG under the O’Neill Government. But more can be done to demonstrate that funds are being used in the most effective manner. The second part of this blog post will explore the PNG Government’s establishment of the National Road Fund and National Road Authority – a story that is less positive.

This blog post is based on the first part of a presentation given by Matthew at the PNG Update at the University of Papua New Guinea, titled ‘Infrastructure Maintenance: Issues and Challenges’. His presentation slides are available here. This blog is part of a series.