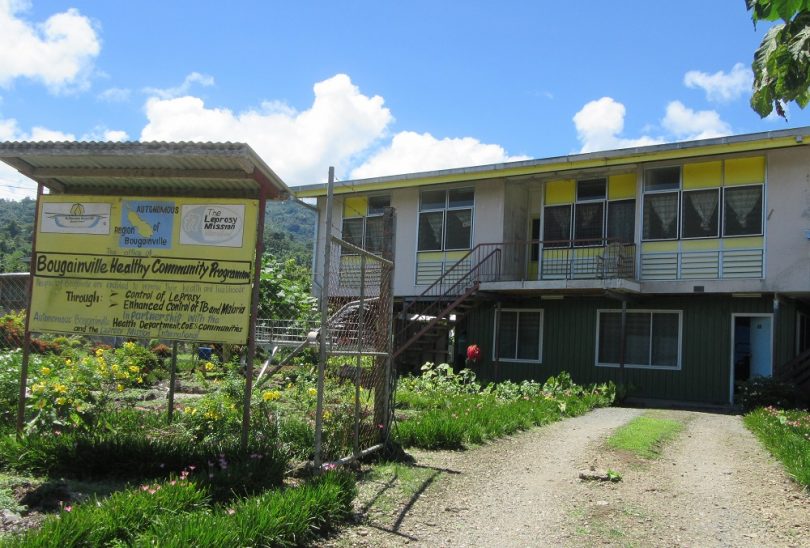 The Bougainville Healthy Community Programme (BHCP) is a program run through the Department of Health of the Autonomous Government of Bougainville (DoH) in PNG. In an evaluation report of the BHCP program, it is claimed as an ‘excellent example of well-planned and well-executed public health and community’ and that it is ‘rare to see such a holistic logic and rationale in a project, which has been effectively implemented within the enormous constraints and challenges of a post-conflict setting’. BHCP’s journey is a positive example of partnership between formal and informal institutions, stories of change agents and transformational leaders and good donor coordination. BHCP, which started as an offshoot of the Leprosy Mission in 2009, has now expanded and covers 739 of the 817 villages in Bougainville with 40 full-time staff. 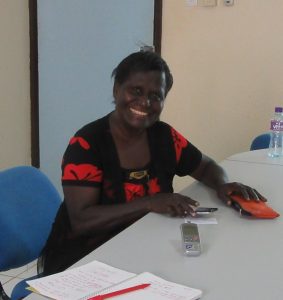 One of the founders of the BHCP is Rubi Miranka, the Program Director. Now in her early 60’s, Rubi has lived an enriching life. With an academic background in nursing, she was at one time the head of the nursing school based in Bougainville. As the daughter of a missionary, she was always interested in helping her community at an individual level. What triggered her to help at the broader level was when she was unable to travel to other parts of PNG for treatment and had to travel to neighbouring country Solomon Islands in 1994 to treat her tooth abscess. This was during the darkest period in Bougainville’s history. The Bougainville conflict for a separate state started in 1988 and continued for a decade. The main reason for the conflict was the discontent relating to the operations of the Panguna Mines. 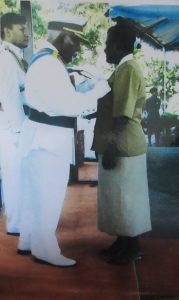 Rubi Miranka receiving her MBE in 2010

It was during the trip to Solomon Islands that Rubi realized the acute shortage of medicines in Bougainville as a result of the political blockade. Through the Solomon Islands Christian Association she was able to reach out to the international community and transfer 100 crates of medicine to Bougainville. This paved the way for Rubi, and with great risk to her own life, she started to work in various areas in troubled Bougainville. In addition to health, Rubi also worked to start primary schools and on women’s group and church building activities (read more about her story during the conflict years here). Her role during this period was significant, and she was one of the 14 signatories to the Bougainville Peace Agreement in 2001; she signed as the Women’s Representative. For her contributions, she was made a Member of the Order of the British Empire in 2010.

During the conflict years, Rubi met Alois Pukienei who at that time was a Health Extension Officer (he is currently the Director of the DoH) in Bougainville. After normalcy returned, Alois approached her to work with the Leprosy Mission on the leprosy elimination program. After the successful implementation of the leprosy program, they continued to work on training volunteers in communities on basic primary health care. In 2009, the New Zealand Government supported this initiative which grew into the BHCP. It is now a major initiative focused on advocacy and capacity building in health-related issues. With its success, it is branching out into other areas, such as education, women’s and youth programs, and in some cases conflict resolution. One of the impacts of the BHCP is that they have been able to create sophisticated organizational community based government structures to manage the multiple programs that are run by the community members themselves. These structures are embedded within the traditional leadership and community structures and are run voluntarily.

Of the 739 villages covered by the BHCP, seven are identified as model villages. These are the ones that are well-structured and are performing with positive outcomes. These model villages serve as exemplars for other villages to emulate. Tangari is one such model village where they have a good governance structure and committed leaders. A key ingredient for Tangari’s success is that their leaders realize the importance of knowledge. With some basic educational qualifications, their leaders attend all training provided by BHCP and the donors in areas such as health and sanitation, leadership training and others. They have realized the value of investing in human resource capacity.

Rubi herself recognizes the importance of education. Her father died when she was only 12 years old, and she had to continue her studies through distance education. She then graduated from the Lae School of Nursing. Rubi then went on to complete her diploma in nursing education, and a Bachelors degree in Education from Flinders University in Australia. Her commitment towards the pursuit of knowledge has not waned, and just recently, in 2016, she completed her Masters degree in management from Vudal University in Rabaul. Rubi has also travelled widely overseas, liaising and coordinating with donors. Recently she also travelled to Manus Island to share the experiences of BHCP’s successes and how it can be replicated in other parts of PNG.

Bougainville is entering into the next chapter of its history with a referendum due in 2019 to determine its independence. Irrespective of the outcome of the referendum, there is an acute need to develop its resources. While income from the Panguna Mines and other sources of natural resources are being considered, Bougainville needs to focus on developing its human resources too. Rather than relying on mining of natural resources and the uncertain market, there needs to be a greater focus on human resource development. It needs to mine more “Rubi-es”!

Lhawang Ugyel is a Lecturer in Public Policy at the University of Papua New Guinea, under the ANU-UPNG partnership program.