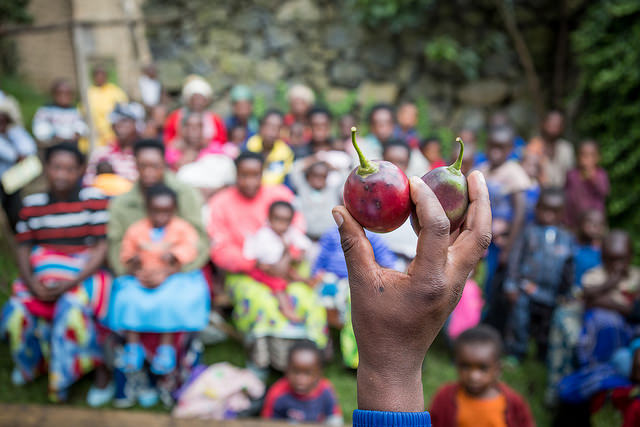 Global malnutrition figures make for uncomfortable reading: of 667 million children worldwide under the age of five, 159 million are too short for their age (stunted), 50 million do not weigh enough for their height (wasted), and 41 million are overweight. Two billion of the world’s 7 billion people suffer from micronutrient malnutrition, and 800 million suffer from calorie deficiency. Of 5 billion adults worldwide, 2 billion are overweight or obese and 1 in 12 has diabetes. The number of children in Africa who are overweight or obese has nearly doubled since 1990, from 5.4 million to 10.3 million. And the situation in Australia is nothing to brag about.

While poor diet is the world’s biggest disease and disability risk factor, the relationship between food and development remains often misunderstood – or incompletely understood – and commitment to improving nutrition in low and middle income countries has been, at best, uneven. A central problem is that we have yet to effectively respond to the reality that a major global epidemiological transition is taking place: overweight (not ‘over-nutrition’ – a term used too frequently that inaccurately implies that overweight is driven by receiving too many nutrients, and discounts that it is in fact a form of malnutrition) – is overtaking underweight as a source of ill-health, disease and disability (see graph below). Malnutrition takes many different forms, including child stunting, wasting and overweight; and adult overweight, obesity and micronutrient deficiency. Recently, the burden of overweight has started shifting to the poor and the dual burden is increasingly observed in low-income communities. In Tonga, for instance – one of the world’s most overweight countries (and admittedly an extreme case) – under-5 stunting rate sits at 8% and wasting of 5%, coinciding with under-5 overweight of 17.3%.

Source: Global Nutrition Report 2016, p. 17. LAC = Latin America and the Caribbean. Europe and Northern America were not included in the overweight figure because of lack of data, while estimates for Asia exclude Japan and estimates for Oceania exclude Australia and New Zealand.

The economic impacts cannot be ignored, with a global economic loss due to malnutrition of around 10%. In China – home to the world’s largest diabetes epidemic and around one-third of all people worldwide with diabetes (11.6% of China’s adults) – people diagnosed with diabetes experience a 16.3% loss of income. In the Pacific, the economic implications of overweight and obesity are being increasingly recognised and addressed.

Over the past year malnutrition has been elevated on the global agenda, and it appears that the gap between evidence and action may be closing. On 1 April, the UN General Assembly proclaimed that 2016-2025 would be the UN Decade of Action on Nutrition. The UN resolution aims to bring about increased action to eradicate malnutrition worldwide, ensure universal access to healthier and more sustainable diets, and encourage governments to set national targets and milestones based on internationally agreed indicators.

This followed the launch of the Sustainable Development Goals (SDGs) in late 2015. Goal 2 – End hunger, achieve food security and improved nutrition and promote sustainable agriculture – provides an important platform for action, and nutrition is fundamentally embedded across each of the SDGs: ‘at least 12 of the 17 SDGs contain indicators that track important nutrition inputs’ (GNR, pp. 2-3). The UN Decade of Action and the SDGs are helping foster a more holistic approach that includes the spectrum of underweight to overweight, and understands food in a broader context that includes health, education, WASH, agriculture, trade, poverty reduction and living environments.

On 14 June the Global Nutrition Report (GNR) 2016 was launched. This annual publication was established in 2013 and makes a serious contribution to the world’s understanding of the causes and consequences of poor diet, and the relationship between food and development. This report – prepared by an Independent Expert Group of 22 researchers and practitioners from all parts of the world, and drawing upon over 100 individual writers from governments, NGOs, UN agencies and research bodies – has further solidified the evidence base and assisted with creating a more coherent, accurate narrative. It provides useful case studies of successful nutrition programs and policies from countries as diverse as Peru, Ghana and India, and from a range of sectors.

The GNR authors suggest that readers ‘use this report as an intervention’ – indicating that what’s really needed now is for evidence and action to take root within each ‘household, clinic, community, municipality, university, business, city, agency, parliament, or government’ (p. 13). So, what does this mean? As a starting point, national nutrition plans are needed to frame action nationally and sub-nationally, and enhance accountability. While over half (122) of all countries currently have national nutrition plans, these plans are uneven – 86 national nutrition plans have targets for exclusive breastfeeding rates, though only 30 have targets for under-5 overweight rates. Also important are cross-government, inter-sectoral, and multi-stakeholder mechanisms to oversee implementation of nutrition-related interventions and foster collaboration.

Increased funding is vital – 24 low and middle income governments allocate just 2.1% of their spending to reducing undernutrition, but spend a total of more than 30% on agriculture, education, health, and social protection. More nutrition-specific funding is needed, and more needs to be found within these other connected sectors. More money is also needed for nutrition-related non-communicable diseases (NCDs) – in 2014, less than 2% of all health aid was directed at addressing NCDs. While in recent years donors have significantly increased their nutrition funding, this amount appears to have plateaued. And, as the GNR shows, better data is needed both to drive effective interventions and to justify their funding, with far too many countries unable to identify where malnutrition exists, what interventions are taking place, how effective those interventions are, and the nutrition status of people who are displaced and in fragile states.

Digging down, we have an increasingly good understanding of what interventions are needed to address the various forms of malnutrition. There are a range of cost-effective interventions available to address the various forms of malnutrition and, importantly, interventions are available which contribute to addressing multiple forms of malnutrition. Exclusive breastfeeding, for instance, remains centrally important to addressing health concerns including diarrhoea and pneumonia (particularly in the first six months of life), and we now know that exclusive breastfeeding can help reduce childhood and adolescent overweight later on. Yet, as the GNR highlights, only 39% of infants up to 6 months are exclusively breastfed, and only 36 countries are on track to achieve the global target of 50% of infants under 6 months being exclusively breastfed.

In the area of overweight and obesity, a range of steps need to be taken to protect people (particularly children) from becoming overweight. In January 2016 the WHO’s Commission on Ending Childhood Obesity released its final report, providing a series of recommendations for governments aimed at reversing the rising trend of child overweight and obesity. Many of these recommendations focus on changing environments that encourage weight gain – including by limiting the exposure of children to advertising of unhealthy foods and soft drinks, reducing exposure to foods high in sugar and saturated fats through taxation, increasing access to healthy foods, and raising awareness about the nutritional content of food. The Commission’s report, which also highlights the relationship between different elements of the malnutrition spectrum, should be considered an important part of the arsenal available to governments and other stakeholders to address malnutrition.

Kent Buse argues in the GNR (p. 8) that both under-nutrition and overweight are ‘global scandals’, and ‘a more political approach to nutrition, which includes, empowers, and respects civil society, may help tip the balance of power to eliminate malnutrition in all its forms.’ Buse’s comment recalls Lancet Editor Richard Horton, who asked [pdf] in relation to NCDs, ‘where is the anger and the activism in response to its own diagnosis of a “global scandal”? Where is the urgency? Where are the Presidents and Prime Ministers corralled by WHO to lead nations in their fight against NCDs?’

For Australian INGOs, opportunities exist to engage with civil society and other stakeholders to contribute to advocacy, policy change and programming around food. With more children now impacted by overweight than stunting, the time has come for INGOs to start looking for ways to advocate or provide technical support around issues like food labelling, advertising, sponsorships and taxation, and to address nutrition in programs and advocacy around themes like trade and the environment.

For DFAT, a useful step may be the development of an overarching nutrition strategy – while the current Health for Development Strategy does include reference to addressing nutrition as a multisectoral issue and the Australian aid program is addressing nutrition through a variety of mechanisms, an overarching strategy (as recommended last year [pdf] by the Office of Development Effectiveness) could (in a similar manner as national nutrition strategies) enhance coherence, multisectoral collaboration, and accountability. Further, DFAT may benefit from a more explicit focus on the role of overweight in driving disease burden (and not just in the Pacific), and on funding cost-effective interventions that address multiple conditions within the malnutrition spectrum.

There remains a gulf between nutrition evidence and action, and the world has been particularly slow to come to terms with the range of ways in which malnutrition manifests and the impacts these have on population health and development. There are signs, however, that this situation may be shifting, and the next decade may herald real improvements in the world’s understanding of malnutrition and its willingness to act.

Sam Byfield works as Executive Officer to ANU Chancellor Professor the Hon Gareth Evans. He is also an Honorary Senior Fellow and Lecturer at the University of Melbourne’s Nossal Institute for Global Health, and consults in global health and aid policy.