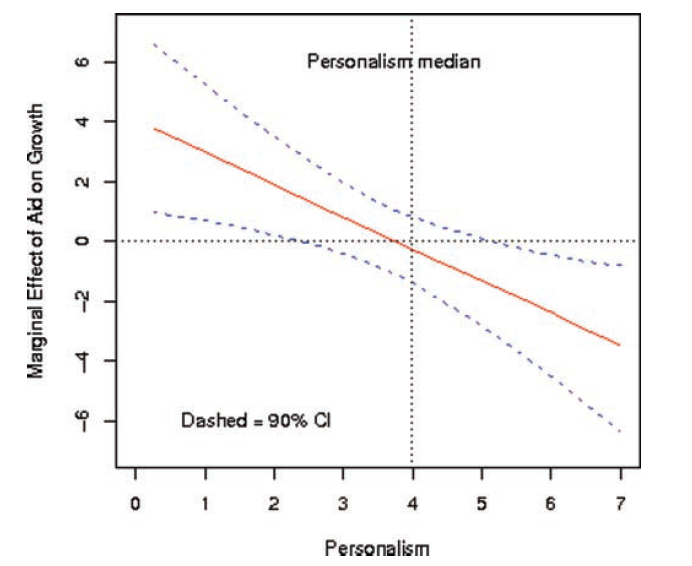 Last week I asked the question, ‘is economic development an appropriate core focus for an aid programme?’ It’s a big question so, to answer it, I broke it in two, focusing last week on whether economic development leads to improvements in the things that really matter, like poverty-reduction and health. The answer being yes – more or less.

“Yes,” because on average across countries economic development is associated with better outcomes in these areas. “More or less,” because there’s considerable variance around those averages. Some parts of the world have done much better than others in turning wealth into health and reduced poverty. And some countries have managed to achieve respectable outcomes despite not being particularly wealthy.

Nevertheless, the average impacts alone provide a pretty good case for focusing aid on economic development — if aid can be shown to be an effective tool for bringing it about. The case is stronger still when one considers that economic development ought to ultimately contribute to countries becoming independent of aid (being wealthy enough to fund their own social programmes). Given the capriciousness of aid donors, this has to be a benefit.

The problem here is that the primary tools that economists have used in their examinations have been cross-country growth regressions. These seem like an excellent tool for measuring aid’s impact on economic development, and they do provide apparently authoritative results. But when you take into account the vast number of potential control variables, the patchy (and often inaccurate) data, the inadequacy of available instruments for dealing with reverse causality, and the lack of any particularly good way of distinguishing good aid from bad, what you’ve actually got is a fraught tool. And also a tool that can be put together in all manner of ways, which partially explains why it’s produced all manner of results. (For a good discussion of some of these issues see here.)

This is not a particularly heartening result. However, it’s not evidence – despite what aid’s critics may claim – that aid doesn’t work.

First, if Arndt, Jones and Tarp are correct and the impact of aid is small but positive, this isn’t to be sniffed at. Over time even small improvements add up.

Second, the underwhelming findings themselves may simply be a result of the methodological challenges of aid growth regressions. Indeed, both studies have already been critiqued (see here and here). Although the underwhelming regression findings are lent credence by the absence of any compelling examples of aid having transformed the economic fortunes of particular countries.

Third, aggregate findings of a small or non-significant relationship between aid and growth may themselves mask the differing impact of aid in individual countries. This possibility has been tested for previously using governance indicators but with the results typically being found to be insignificant or methodologically wanting. However, one recent study by Joseph Wright (gated link here) appears to have revived the fortunes of such work, apparently showing that the impact of aid on economic development varies depending on the political characteristics of recipient countries. It’s a chart from this paper that heads this post.  If the paper’s findings are correct (and they may not be) aid has a significant positive impact on growth in countries with political systems that are only weakly personality driven, while its impact in personalist polities is negative.

Fourth, even if aid isn’t effective in promoting economic development there’s good evidence to suggest that aid does work in other areas, at least in certain instances. In fields such as health and education aid has had successes. Not always, but it’s helped in some countries make schooling accessible, has rid the world (or nearly rid it) of illnesses like Small Pox and Polio and helped with a range of other health concerns. There’s some evidence to suggest aid has succeeded in areas such as democratic strengthening too.

The third and fourth points above are the crucial ones. Developing countries may all be poor, but they are not all alike. One only has to contrast the culture, political economy, geography and industry of India and Tonga to see this. And aid isn’t so powerful a tool that it will be able to perform the same tasks everywhere. Given this, and given that there are numerous means through which aid may potentially meaningfully improve people’s lives, it is a mistake to limit that potential through a restricted focus. Far better to make decisions based on context, on need, and on what aid might potentially be able to do.

In general, at least for poor countries, economic development is good. But development is difficult and aid can’t do everything – in such circumstances mandated myopia is mistaken.

Terence Wood is a PhD student at ANU. Prior to commencing study he worked for the New Zealand government aid programme. These blog posts are based on a working paper he wrote for New Zealand Aid and Development Dialogues. You can read it here [pdf].